Are you having a stroke? Do you know how to tell?

When Fred Sanford of the TV show “Sanford and Son,” grabbed his chest, flailed about, yelling “This is the big one!”, it was obvious, he thought he was having a heart attack. 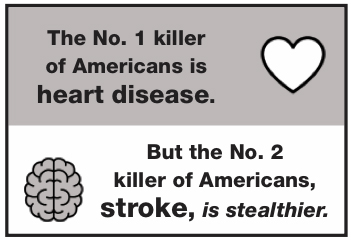 Stroke victims may instead experience numbness on the left or right side. Perhaps, they have some blurry vision. Maybe, they feel sudden confusion. And that is the trouble with stroke: unlike the crippling, undeniable pain of a heart attack, some stroke patients aren’t quite sure.

May is Stroke Awareness Month.

Doctors and stroke survivors want us to know the signs of stroke, so that we can get help, F.A.S.T.

F  is for “face drooping”

A  is for “arm weakness”

F.A.S.T. also implies that the faster the emergency response, the better the outcome.

“Do not try to excuse the signs,” says Tara MacInnes, a stroke survivor and spokesperson for the San Antonio American Heart Association and the American Stroke Association. 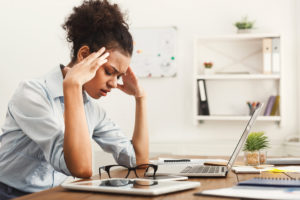 “I have heard too many times from survivors, who say they had a stressful month, that they were tired, had dehydration, and then they chalked up those symptoms to stress. I hear this far too often from stroke patients.”

MacInnes is 31. She had strokes, as a baby.  “I wasn’t properly diagnosed with the condition that caused my strokes until I was 17. I had two strokes in my infancy, one on each side of my brain.” Then, she was diagnosed with “Moyamoya,” a condition that predisposes one to strokes. She calls strokes that affect the brain, a silent stalker.

“Many times when people have a stroke, they realize there were symptoms. Like, yes, I experienced this, but I ignored it, brushed it off, and thought it was nothing,” she says.

“A TIA, a transient ischemic attack, mimics a stroke. But they are not long lasting enough to cause damage to the brain. But they are warnings, or precursors, to a future stroke.”

The American Stroke Association says that strokes are “preventable, treatable and beatable” if one gets prompt medical attention.Signs of a TIA include:

• dysarthria, or physical difficulty when speaking

• an abnormal sense of taste or smell

There are two kinds of stroke.

“Ischemic is where a portion of the brain is deprived of blood, for any one of many reasons, some of which can be related to a blood clot getting to a certain area, arising from someplace else in the body,” says Dr. Schnitzler.  Here, there is a progressive obstruction of the blood vessels, leading to a particular area in the brain.

“This reduces the blood supply until that area no longer receives the nourishing blood supply.”

This begins in somewhat of the same way, but the blood vessels supplying the area are not healthy to begin with, and therefore, can leak. The leaking and clotting of the hemorrhaged area damages brain tissue. It sounds frightening and strokes can kill or leave victims incapacitated. But for most people, prevention is simple.

“When people diet, it is a lifetime event. It is not to get into a suit or a dress and then go back to what we were doing before,” says Dr. Schnitzler.

Fatty foods increase cholesterol. They pile on the pounds and clog up the arteries. And, salt is no friend.  “One pickle … has more salt than most people should have in the entire day,” he says. Even pickle slices — have too much salt!

“Heart rhythm irregularities are also a problem.” The cardiologist explains that atrial fibrillation means that clots may form in the heart, and be “launched like bullets into the brain.”

If stroke runs in the family, the risk is higher. J. Fernando Triana, M.D. is with Cardiology Clinic of San Antonio and explains “The family history of CVAs may indicate a genetic predisposition. The role of genetics may be a direct predisposition for vascular disease,” he says. CVA is short for “cerebrovascular accident.”

MacInnes says, “Strokes aren’t just for the old.” Her fiancé was a fit 23-year-old and a member of the United States Coast Guard when a brain aneurysm resulted in a stroke. “More and more, pediatric and adolescents are stroke patients, even in utero. Strokes can happen to anyone, and, at any age,” she says.