Just 20 minutes outside of San Antonio, in the quaint Hill Country town of Boerne, five women blend their personal passions with the desire to serve the community they choose to call home. Women-owned businesses in Boerne include retail, restaurants, real estate and wellness, to name a few.

Janet Baker, president of Hill Country Women in Business, a local non-profit organization that supports and promotes women business owners in the area, touched upon the portion of women business owners their membership represents: “A little over 40 businesses are members of the group.” There is no denying the attraction of Boerne’s mix of small town charm with the proximity to itslarger neighbor, San Antonio, and Baker believes that very quality is the reason it is favored over the big city. “The reason people start businesses here is the same reason they live here: They want to have a source of income via business, but with a quality of life,” she says.

While learning about these women, their enterprises and the ways in which they support one another, either through customer referrals, monthly meetings to plan community events or simply through Facebook to stay connected attests to the tight-knit community for which Boerne is known. 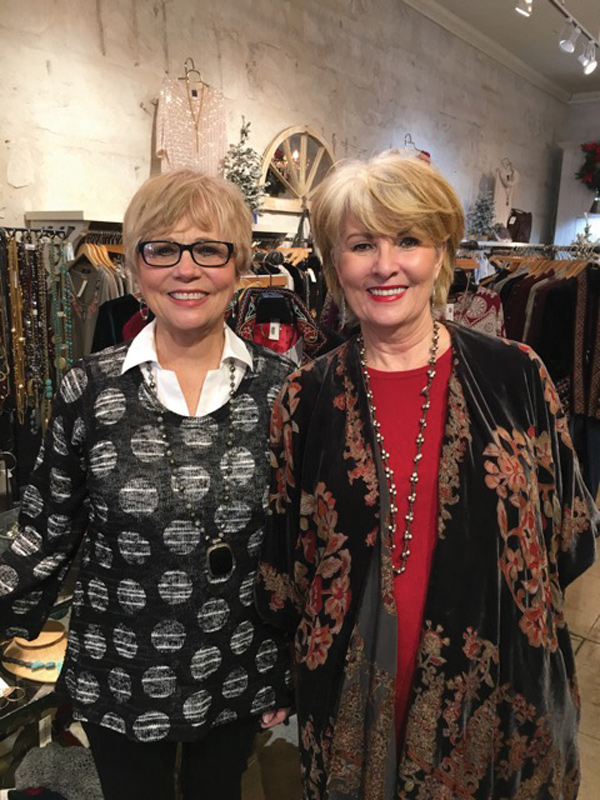 When Celeste McCabe came out of retirement to open her clothing store, Celeste, back in 2004, she saw the possibilities of Boerne, saying, “I knew I wanted to open a store, and I picked Boerne because I thought it had a lot of potential.” Two years later, she convinced her sister, Suzanne Hardeman, to move here and join her in the business, and ever since then the two have been having fun working together while bringing their childhood aspirations to life. “We both love clothes, and when we grew up, I would be the mannequin, and Celeste would be doing her 4-H project, telling me to hold still,” Hardeman recalls of their days of growing up in Taft, Texas.

And McCabe’s initial affection for Boerne has paid off as the two have seen business go a lot better than anticipated. They attribute the store’s success to filling a need with the clothing and accessories they offer, along with the customer service given when someone walks in the door.

“I’m real big on customer service. I like to send people out of here feeling good about themselves and looking good.”

McCabe and Hardeman want the women who visit their store to feel confident and enjoy fashion, something they both do in their partnership as sisters and running a store together. 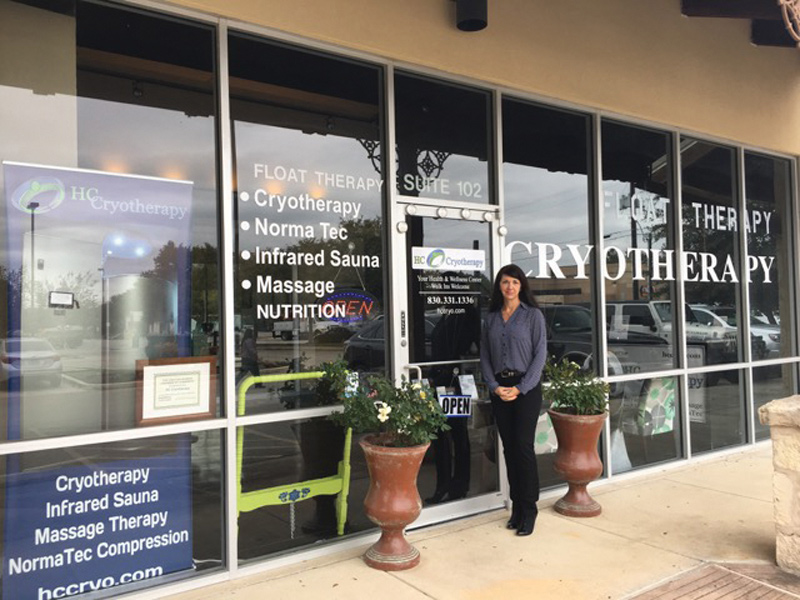 A relative newcomer to the business scene in Boerne, Jennifer Rust, an RN, opened HC Cryotherapy almost two years ago after suffering from an injury during an athletic competition. Her wellness facility hosts a number of services, from whole body cryotherapy to nutrition, infrared sauna and NormaTec Compression. All aid as an alternative to medicine to help patients feel, look and recover at their best. At the time she was recovering from her injury, Rust was having to drive to five different places around San Antonio from her home in Boerne to get the services she now offers.

“My goal here with this whole place is really to serve the general population. People like me, who can’t find relief in other ways and don’t want to take medicine.”

For example, benefits from cryotherapy — exposing the body to subzero temperatures to produce a physiological reaction that sends nutrients, endorphins and adrenaline throughout the body — can help those with chronic pain, anxiety and depression disorders, recovery from injuries or after surgery and even conditions such as multiple sclerosis. “It’s what really keeps me going because every day I’m blessed to see somebody who walks in with pain and walks out with no pain, “she says. 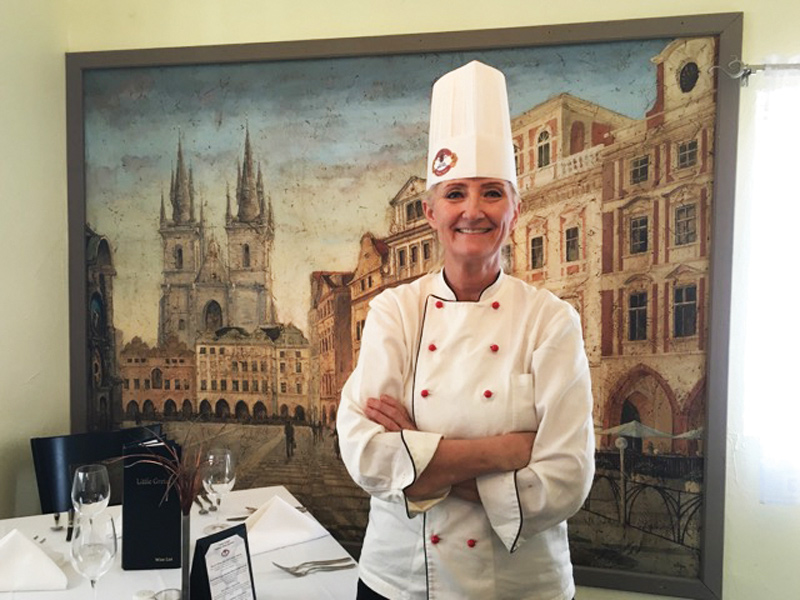 Chef Denise Mazal has been serving up her signature Czech cuisine with its traditional German flair in Boerne since 2009. With help and encouragement from her daughter, Veronica (who at the time of the interview was busy working on the opening of an addition to Little Gretel, a full-service bar), Mazal decided to open the restaurant as an answer to the request of an established clientele from her other business venture, a toy and needlework shop located next door. “I knew the needs because people had always been asking why don’t you open a German restaurant?” But building Little Gretel to what it has become today wasn’t an overnight thing. Mazal explains it took years to bring her vision to life. She took her time in building the space, using her background as a civil engineer, and worked with an architect, researching other spots around the country.

“I wanted to create an atmosphere that Boerne deserved, because it was love at first sight.”

Mazal arrived here after she defected from Czechoslovakia. Her meticulous thought placed into Little Gretel’s construction and location, even down to the parking, all plays into the restaurant’s success for almost 10 years, making it a town staple. That attention to detail is also expressed in the way she prepares her dishes, calling upon her mother’s own experience as a chef and the old traditional cooking of her Czech heritage. As Mazal puts it, “I want people who come here to feel like they traveled without buying a ticket.”

Wendy White, Traditions at the Depot 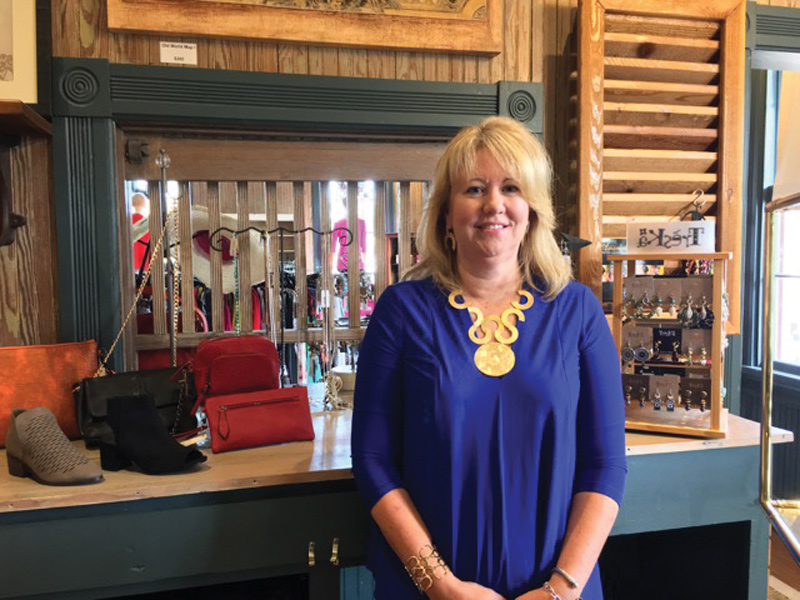 The original train depot brought in from Encinal, Texas, as part of this upscale women’s clothing store, Traditions at the Depot, stands out as travelers drive along the south end of Hill Country Mile. Wendy White is in her fourth year of ownership and the third owner to pick up where previous ones left off, maintaining the same customers, and continuing to meet a need since 1996. It is the only retailer in town that carries the Brighton Jewelry line and also supports local jewelry designer Claudia Lobao, selling her pieces in the store. And providing a variety of items for a wide range of customers is what White strives for:

“That’s what I try to do with the articles and the clothing, and items I buy — to be for generations. Everybody can find something.”

When White was looking for a career change, moving into the role of business owner seemed like the logical next step. In the clothing business from an early age, she helped her dad, on the wholesale side of it. She spent a lot of time traveling and helping him, “I helped him all my life and always enjoyed it.” Now as the owner of her own store, White gets to help her customers enjoy a fun shopping experience with the variety in apparel, accessories, shoes and jewelry she carries.