Artbeat: Music for the Soul

The Abode Home is a unique place where terminally ill patients are embraced and taken care of. It’s not a hospice, says the brochure, “but rather a home with a simple, welcoming, peaceful ambience for guests entering the last three months of life.”

The sprawling house is indeed peaceful, almost serene, as caregivers and volunteers go about their work with dedication and compassion. The reason I am visiting on this particular day is to witness a vigil by music thanatologist Deborah Marshall, the only such professional in the entire state of Texas. Joined by Abode’s director, Martha Jo Atkins, the two of us tiptoe into a room where Carla, a lung cancer patient, is lying in bed in a rather agitated state, with her grieving father watching tenderly over her. Marshall sets up her portable harp, introduces herself to Carla, who is not fully conscious, and after a few quiet moments, starts plucking the strings with a gentle touch. It takes a little while, but Carla eventually relaxes and her nervous movements subside. “It’s magical,” whispers Atkins. The sound of the harp in the darkened room ends up casting a spell over all of us.

Half an hour later, Marshall and I retreat into a lounge to talk. “When I play, I am guided by what’s going on with the patient,” she explains. “I started playing one piece, but it didn’t match her need, so I switched from an unmetered piece to a metered one that has a regular tempo, which provides an atmosphere of stability. Steady repetition helps people who are agitated. I was also observing her breathing, and I could tell when she was responding even though she was unconscious.

“This music is not for entertainment,” she continues. “It’s called prescriptive music, and it’s meant to be soothing for both patients and family members. The music creates a safe space to think and feel things that might have been too hard to consider before or express in words.”

Music thanatology is a new subspecialty of palliative care that utilizes both harp and voice to serve the physiological and emotional needs of the dying. It can alleviate a range of physical symptoms such as pain, restlessness, sleeplessness and breathing difficulties. Though there are historical precedents for combining music and medical care, the modern thanatology therapy was first developed several decades ago by musician Therese Schroeder-Sheker and her Chalice of Repose Project. As an undergraduate, Schroeder-Sheker worked in a geriatric facility where people often died alone, and their bodies were quickly removed from the premises. The young woman was deeply disturbed by such insensitivity. On one occasion, she entered a patient’s room to find him in the throes of dying. Intuitively, she stayed with him, held him and sang softly to him. The dying man gradually quieted and eventually died peacefully in her arms. That was the spark that later gave rise to palliative music therapy.

The music used in vigils may come from a range of sources — Gregorian chants, hymns, lullabies, Celtic songs and other traditional melodies – but it is always contemplative and calming. “Carla could not listen to Mozart or Beethoven,” says Marshall. “The melody has to be short and simple. In training we were taught to analyze the music to see how we could use it and make it unique for each situation.”

Though health care personnel and the general public are still largely unaware of the benefits – and even existence – of music thanatology, there are practitioners today all over the U.S. and beyond who have been certified by the Music Thanatology Association International. Unlike the founder, they are often not musicians to begin with, but learn to play the harp while in training.

She Discovered Her Calling 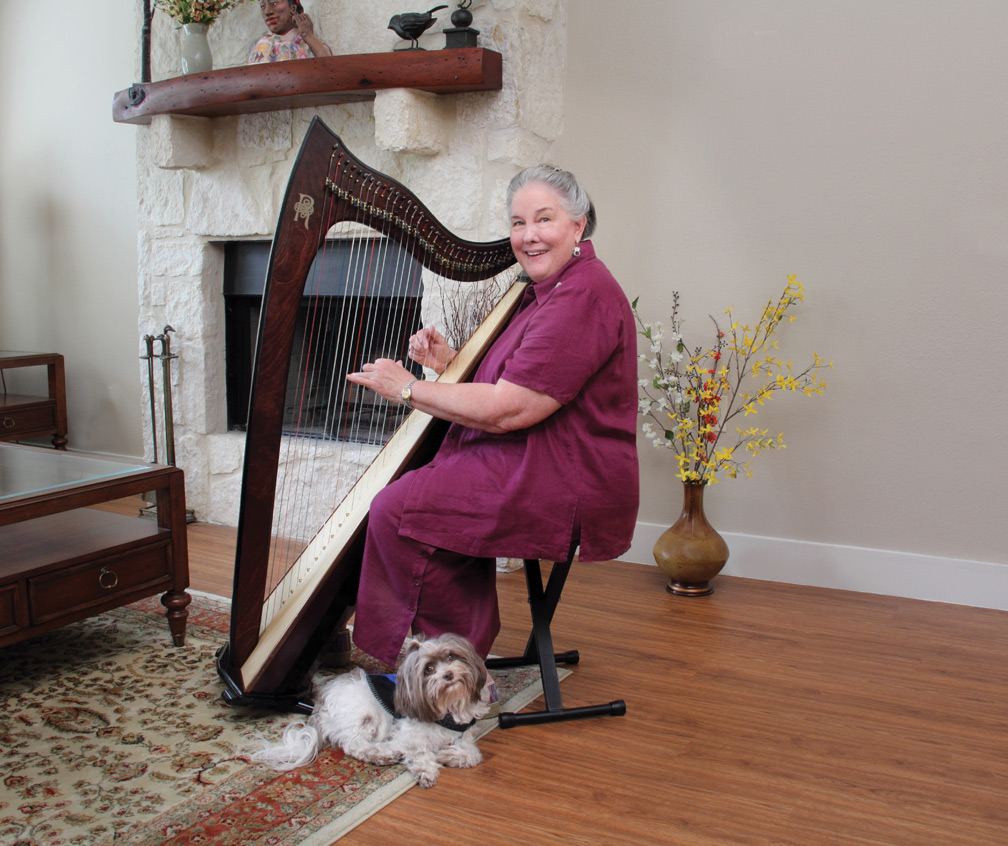 That was, in fact, the case with Marshall. She played saxophone in school and sang in church choirs, but that was it. A native Texan, Marshall worked as an X-ray technologist for 25 years in several Texas cities, later switching to massage therapy because “all my life I have wanted to be in a helping profession.” In between, she spent two years as an IT system installer for a for-profit corporation and “couldn’t stand it.”

When she first saw Shroeder-Sheker interviewed on TV, Marshall was “dumbstruck.” What a wonderful thing to do! she thought. Yet it wasn’t until years later, while living in Dallas, that she decided to apply to the Chalice of Repose school and got in. Her “Dallas life” was packed up in two weeks with no regrets. Then, when on the first day of school, someone offered to rent her a house at a good price, everything seemed to fall in place. “I felt like I was doing what my soul wanted me to do. I had found my real calling,” says the therapist. “Every person there felt the same way. There was a man who had come all the way from Australia because he so passionately wanted to do this work (with the dying).”

Finding a job after graduation, however, proved difficult. Nevertheless, having fallen in love with the Montana mountains, she stayed in Missoula for the next 16 years, earning a living as a massage therapist. Due to various circumstance, Marshall did not get her certification until 2012 after moving yet another time to Eugene, Ore. There, the opportunity eventually arose to develop her Heart Resonance music thanatology practice as part of the music ministry at her church.

Now back in Texas to be closer to family, Marshall has been volunteering her services for Abode Home as well as two hospices, VITAS and Heart to Heart. “When I got here, no one knew anything about music thanatology. We are pioneers in this field. My dream now is to get a paying job and have hospital and hospices realize the real value of this work,” she says.

Do patients ever comment, given that many are still conscious and able to interact?

“Some patients want to talk, but they really don’t need to say anything. I want them to rest deeply in the music. Some go to sleep, and some want to sing with the harp,” she explains. “Those who have had vigils before seem to remember the music in their bodies, and they relax faster.” Families, however, are invariably deeply grateful. “Death has become such a separate thing in our society, removed from ordinary life. Most people don’t know what to say or how to behave around a dying person. But the vigils open people up. There’s so much love and tenderness then,” says Marshall.

Her work has changed her own thinking about life and death, she adds. “I have become acutely aware that no one has guaranteed time on Earth. It has made me more aware of my spirituality and has made me a kinder, more compassionate person. I now relate to the world through a heart that’s open and vulnerable. That changes you.”