Art Beat: Art is What Makes Us Human 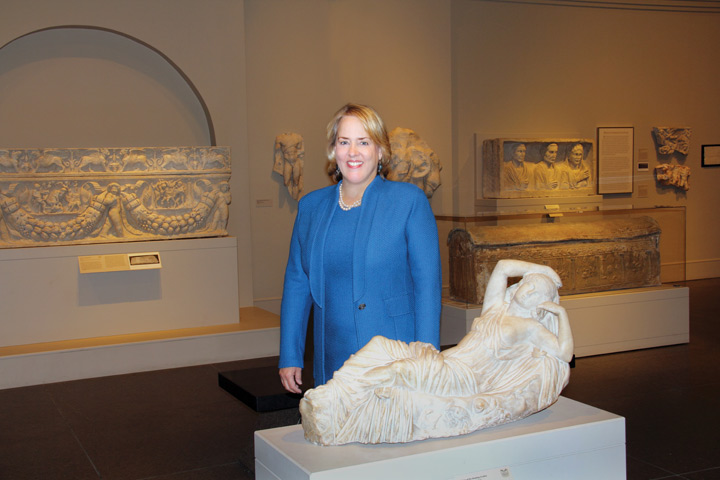 The roof was damaged by hail and the Cowden Gallery Pop Art exhibit had to be closed earlier than planned, but on this sunny day in May when I arrive to interview director Katherine “Katie” Luber, there’s a new excitement at the San Antonio Museum of Art.

Plans are already underway to install the next special exhibition, Highest Heaven- Spanish and Portuguese Colonial Art from the Collection of Roberta and Richard Huber, which will remain on view till Sept. 4. Though SAMA has a strong Latin American collection of its own, Highest Heaven focuses on countries such as Brazil, Bolivia, Peru and Argentina rather than Mexico and Central America.
The museum got a chance to show the collection thanks to Luber’s professional connections. Back in the 1990s, she worked as a curator of another Latin American show in Philadelphia that included works the Hubers had collected over many years. “We became friends and have stayed in touch,” she says. “So I asked them if they would let SAMA show their collection, and they agreed if we could turn it into a traveling exhibit. We did. It will go to Worcester, Mass., and Sacramento, Calif., after it closes here. For us, it’s a unique glimpse into South American art, which is very different from Mexican art. The study of this colonial art is in its infancy right now. The artists and artisans of South America saw the European Christian art but rendered it in their own visual language. That’s what thrills me about it.”

Indeed. One delightful 18th century painting shows the Virgin Mary washing Jesus’ diapers while Joseph holds the baby Jesus nearby. And several ivory sculptures of the Christ Child show baby Jesus like you have never seen him before. Other surprises abound — in the iconography, background details and the juxtaposition of European and Andean elements. The wonderful catalog puts it all in historical and religious context. “It will be hugely popular,” predicts Luber.
But Heaven is not the only thing on the director’s mind. A bunch of other projects are underway, including the relocation of the heating/air conditioning equipment from the top of the museum building to a $6.2 million facility that will be built across the street. It’s one of those essential but hardly glamorous things that need to be done to, among other things, maintain accreditation by the American Alliance of Museums. The money came from the city’s 2012 bond program and the fundraising efforts of the board, though it took some convincing. One trustee reportedly asked, “What, you want me to put my name on a boiler?” Yet it is an important “investment in the future,” notes Luber. Having boilers and old piping right above the art galleries is not a good setup.

Several other parts of the museum building will receive attention as well. Work on the renovation of the auditorium and the European art gallery is scheduled to start this summer, and a few utilitarian facilities will be improved, too. In addition, CPS is likely to “convey” part of its land on Jones Avenue to SAMA, opening up expansion opportunities.
This forward momentum fits perfectly with Luber’s vision for the still young institution, which opened its doors in 1981. “I was hired to raise the national profile of the museum,” she explains. “We have extraordinary collections – a comprehensive antiquities collection, a strong Asian one as well as a Latin American collection. We recently received a gift of 100 pieces of aboriginal art from Australia. We have European art and contemporary art. Our mission is to be encyclopedic in scope. This museum has to be the place where citizens can come to see the best art from around the world.”

Under her leadership, SAMA has substantially extended its community outreach, added to the curatorial staff and increased its membership by 218 percent since 2011. The variety of exhibitions has certainly played a key role, from Glories of the Baroque and samurai weaponry to Matisse, Picasso-inspired tapestries, Rodin and Pop Art
“I like the shared humanity of art,” says the friendly director. “Art is the highest creation of the human spirit; it tells us about ourselves in a way that we cannot discern otherwise. It’s what makes us human.”

One of Luber’s earliest memories is of her mother pushing her in a stroller while visiting the Houston Museum of Fine Art. Not surprisingly, as a preschooler, little Katie was already taking art classes, and by high school she was working part-time at a Houston gallery. “I mainly answered the phone, but it was fun,” she recalls. Though she started college with pre-med ambitions, by her sophomore year she had switched her major to art history.

“Art history can be a portal to other disciplines. You can study history, religion, social mores, all through art,” she observes. “It’s a lens on so many other things.” She eventually received a master’s degree in art history from UT Austin, followed by a Ph.D. from Bryn Mawr College. A couple of museum internships and a year in art-rich Vienna rounded out her education. In 1993, the young scholar joined the Department of European Paintings at the Philadelphia Museum of Art as the curator of the John G. Johnson collection of old masters. During her 10-year tenure in Philadelphia, she curated a number of shows and supervised the installation of others while also overseeing other aspects of the museum operation. In addition, she is the author of scholarly papers on Renaissance painting.

“Along the way, I learned that I was a good administrator and good with people, so I started thinking about getting an MBA,” she says. A chance presented itself when her husband, Philip, an academic psychiatrist and currently a professor at UTHSC, accepted a teaching job in Baltimore. The couple had maintained a healthy marriage for six years while working in different cities – he in New York, she in Philadelphia for five of those years – but commuting from Baltimore for an indefinite period of time seemed too impractical. So Luber decided to get that MBA and in 2005 started a spice business with a friend. “It was a lark,” she says with a laugh, “but a fun lark.” Spices were big in Baltimore, where the McCormick Corporation was headquartered for decades, and downtown smelled of cinnamon and oregano. Though the logistics of running a business appealed to her, SAMA’s offer clearly proved more attractive.

Since her arrival, Luber has put emphasis on customer service and implemented programs in which visitors and nonvisitors have expressed an interest. She is also known for her networking zeal and readiness to reach out to various constituencies. “That’s part of my job. I like knowing people, knowing the community,” she notes. Fundraising and cultivating collectors are also part of the game, given that 57 percent of the annual revenue in 2015 came from private contributions. In addition, she takes part “in 85 percent of events.”

So, is there a spot in the beautiful museum where she retreats for a quiet time? Without hesitation, she mentions a couple: the West Courtyard and the Roman Gallery in the Ewing Halsell Wing, a serene place of cool marble statues and soft light filtering through the louvers. That’s a perk many would envy.

In barely five years, Luber has become a well-known personality on the local cultural scene and is presently one of the co-chairs of the city’s 300th anniversary celebration, in charge of the arts and culture part. She recently traveled to Spain with city officials to invite the king and queen to visit us in 2018 and to make other cultural and trade connections. In a note to me she wrote: “…. 2018 promises to be the year when everyone will want to visit San Antonio. We hope they experience a thriving, welcoming and exciting city filled to the bursting with cultural opportunities.”

theKFORDgroup Irma Goodman, CPA, brings over 20 years’ experience working with publicly traded companies, public accounting firms, and as a controller for a real estate management company. Skilled in problem analysis and innovation, she is passionate about working... 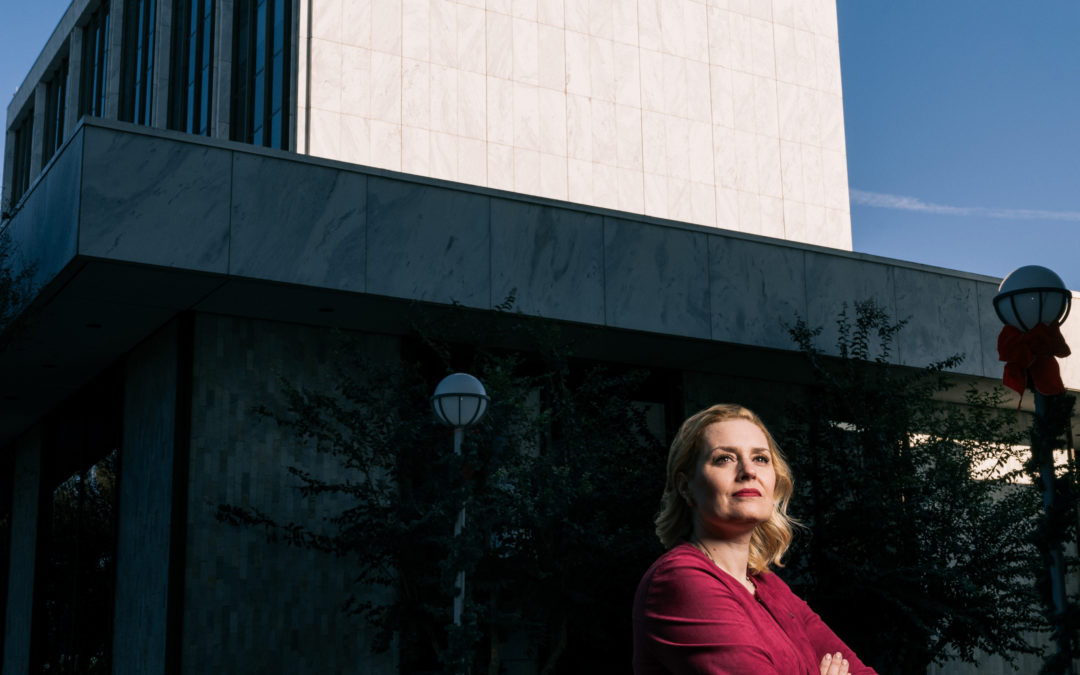 Elizabeth Hetrick Director of Wealth Advisory Broadway Bank Elizabeth Hetrick, a third-generation San Antonian, always knew that her calling was to help people. But ten years into a career as a lawyer, Hetrick realized that banking - specifically wealth management,...