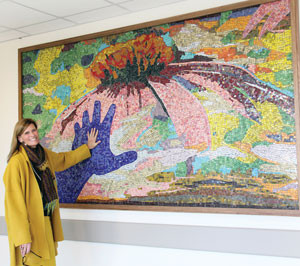 Hospitals are rarely inviting places to visit let alone to see original art. But the new Sky Tower of the University Hospital in the Medical Center is definitely an exception. As you step into the spacious glass-walled lobby, you may think you’ve entered a gallery. On your right you’ll see a huge lantern-like installation titled Foxglove, inspired by the plant that was the source of the early heart medication digitalis. Facing it across the hall is Hippocrates, a more two-dimensional work consisting of a series of circular glass panels, each imprinted with a different image or text related to health. If you look carefully, you’ll also see the face of Hippocrates, the father of medicine, emerge from the design. And for good measure, the panels are arranged to invoke familiar symbols, such as the cross and the serpent-entwined Rod of Asclepius, an ancient Greek emblem that is still used in medicine today. And that’s just the beginning. Original works of art adorn all 10 floors of the hospital — hallways, waiting rooms, nurses’ stations, patients’ rooms and several enclosed gardens where patients, families and staff can enjoy the fresh air and rest for a while. Clearly a major effort was made to improve the environment for all who dwell inside these walls. In fact, the art was only the final part of the $899 million University Health System (UHS) capital improvement project, which in addition to the Medical Center hospital includes the Robert B. Green Clinical Pavilion downtown.
Called Salud Arte-Art of Healing, the $7.2 million art program was overseen by art consultant Allison Hays Lane, who’s devoted the past five years of her life to it. “It’s definitely the biggest project of my career,” she tells me as we are about to embark on a tour of the facility. “When it was completed, I felt kind of empty. I was relieved that it was done, but I would have done it all over again.” Her enthusiasm and excitement about the project is practically palpable: “I am very proud of it. I am proud of the artists, architects, the UHS staff – it was such a team project, such a collective vision. It was an extraordinary journey.”
Indeed. The entire enterprise was guided by the Design Enhancement Public Art Committee made up of UHS staff members, Bexar County Hospital District Board of Managers, community leaders and art professionals with a goal of using art to facilitate healing and recovery. “Art in a hospital is different than in other places,” Hays Lane points out. “It has to be hopeful, calming, a positive distraction. We stayed away from troubling images and symbols. We pretty much stuck to nature-inspired works and abstraction, images and forms that relate to good feelings. Research has shown that such an environment reduces the length of hospitalization for most people.”
Hays Lane worked with a wide variety of artists on the three aspects of the project: design enhancement, public art and what is referred to as art procurement. In design enhancement, the artists had to collaborate closely with the architects since their art became an integral part of walls, doors and other structural elements. Public art refers to large site-specific pieces, while “procurement” defines everything else — smaller movable paintings, prints, glass objects and sculptures.  Altogether, more than 400 artists from 21 states and eight countries created 1,500 artworks for both UHS locations. 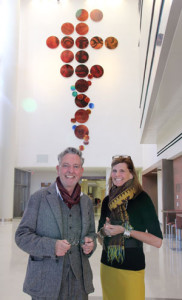 San Antonio and Texas artists are well represented. Among them are local painter Jane Swanson, who was commissioned to create the beautiful triptych Blessed that dominates the Surgical Services Family Lobby; Angel Rodriguez-Diaz, who transformed the main lobby with his DNA: Mosaic of Our Humanity, a two-story glass wall with inlaid patches resembling a chromatogram; and Sabine Senft from Boerne, the creator of Embrace, a contemporary sculptural take on the mother-and-child theme placed in the Aziz Memorial Garden. Hays Lane knows every piece and every artist. As we move along the corridors, peek inside an empty room, visit the cozy waiting areas and admire the gardens, she tells their stories. This artist died before the project was finished, and this is by a Hungarian artist whose son is a doctor at the hospital, and this piece is by Al Held, who is in the McNay collection … the narrative goes on. We end our tour at the enclosed bridge that connects the hospital to the staff garage, and she wants me to see a mosaic that Californian Jose Antonio Aguirre conceived but whose execution involved many UHS health care professionals.

Living with art
Though she is not an artist, Hays Lane has lived with art since childhood. Her grandmother was an artist, and her mother, a writer/editor for the Children’s TV Network, took her regularly to museums in New York City, where she grew up. The family also collected art and socialized with an artsy crowd. In college at Sarah Lawrence, the young woman studied art history, which included a year at the University of London and an internship at the National Maritime Museum. “From an early age I knew I wanted to work in a museum,” says the tall, elegant art consultant. To solidify that goal, she also pursued a master’s degree in museum education.
After her husband Neel Lane’s job brought the couple to San Antonio, Hayes Lane did not abandon her goals. Following a stint as development director for the San Antonio Museum of Art, she spent 10 years working for Harold Wood’s companies AviArt Limited and HJW Vita Nova, six of those as director of the Artists Gallery at AviArt, an exhibition space that, thanks to her, gained a solid reputation in contemporary art circles. Today, she runs her own art consultancy firm, the Olana Group, and it was in that capacity that she was hired for the UHS job.  Asked what she had enjoyed most about the massive project, she surprises me by saying “the installation. That was fun, meeting the truck, deciding where to place the different pieces, changing things around. That was the curatorial hands-on part,” she explains. Inevitably, there were some tough moments, too, the most obvious one being the accidental death of artist Chuck Ramirez, who was both a friend and one of the artists working on the design enhancement part of the program. Fortunately, a couple of other artists volunteered to complete his vision. 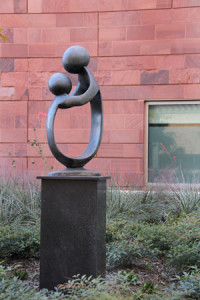 Recently divorced after 29 years of marriage and the mother of three children, two of whom have left the nest, Hays Lane says she’s enjoying this chapter of her life: “I feel blessed that I have good health, a good job, good friends.” And she’s not standing still. In addition to continuing involvement with UHS, she’s been active on other fronts. Working with the Hare & Hound Press, the Linda Pace Foundation and Artpace, she served as coordinator and catalog editor for Art of Collaboration, a print exhibition scheduled to open this month at Artpace. Another client is the San Antonio Public Library Foundation for which she curated the Winds and Words of War, a show of WWI posters and prints from the library collection that toured the United States for five years. The project received a Traveling Masterpieces grant from the National Endowment for the Arts and is expected to travel to France in 2017.
Though a New Yorker, Hays Lane loves living here and finds the local art scene exciting. “Thanks to Linda Pace, the UTSA art department and other developments, San Antonio has become a very rich art community,” she notes. “It’s also exciting to see all the little galleries that keep on springing up. Artists give so much to the community. They play a role in the economic development of the city.”