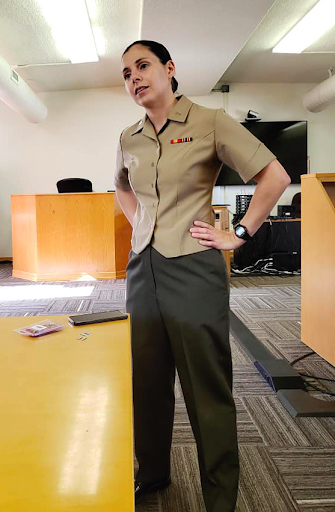 The sound of the gavel rings through the court room to signal the start of a trial. Many would be intimidated by such a scene, but for U.S. Marine Capt. Ashley Robert, a defense attorney with Marine Corps Defense Services Organization at Marine Corps Base Camp Pendleton, California, this is just another day. She stands confidently because she knows this is another chance to help a fellow Marine.

Adrenaline-filled court rooms are where Robert thrives. She acknowledges the rumors and speculation about military law, including the perceived strict punishments often involved. She steps up to the bench knowing that she is representing her client and, ultimately, the idea that every Marine has a right to a defense.

“A lot of times people think the military is harsher when it comes to giving out punishments, but everyone has a right to an attorney,” said Robert. “This still holds true in the military. I’ve been a defense attorney for a while now, and our slogan at the DSO is ‘Marines defending Marines.'”

Robert, a native of Fredericksburg, Texas, attended the University of Texas at San Antonio, before continuing on to law school at the St. Mary’s University School of Law.

“I didn’t think I was going to go back to school, but I feel like I have a strong sense of justice,” said Robert. “As I went through school… that feeling got stronger, and my passion for law kept developing.”

Robert said studying law gave her purpose and drive. She went to practice law for a year, however she yearned for something more and a chance to grow her career. She found what was missing when she was approached by a Marine recruiter.

“I knew it was going to be a challenge,” said Robert. “I wasn’t sure if I could make it through or not. Law school had not prepared me for the Marine Corps. I was already working as an attorney when I was recruited and I knew I wanted to go into public service. When the Marine recruiter reached out to me, I looked into the program and I saw it as an opportunity to reach that goal.”

Robert said her biggest obstacle was the mental challenge brought on by the physical trials during her 10 weeks at Officer Candidate School.

“You have to want to be a Marine. Not just a Lawyer,” said Robert. “It’s a really significant accomplishment when you finally earn that Eagle, Globe and Anchor. I think you can be a great lawyer, but I think you also need that desire to be more.”

Her officer selection office helped prepare her to overcome challenges through training, perseverance, and preparation before she left for Officer Candidate School. Even now, she relies on what she learned from them, other Marines and mentors to mold her leadership. 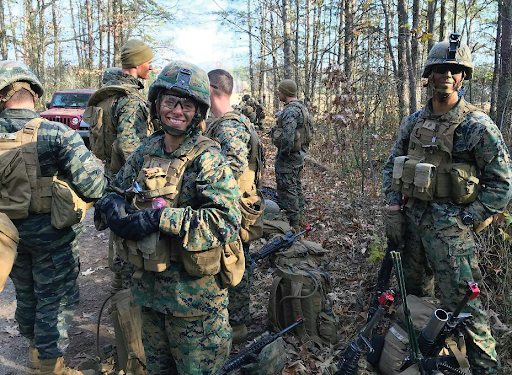 “People are very direct in the military,” said Robert. “I’ve learned and developed my own directness and assertiveness in my leadership style; as an attorney and a Marine.”

Robert states that it’s important to have diversity in leadership, regardless of race, gender or background. Each person is unique and brings something to the table. Unique perspectives can be essential to different situations and added diversity of thought makes the organization stronger.

Robert attributes her success to many Marines she has encountered in her journey, but perhaps none as much as the officer in charge at her first duty station.

“My OIC (Officer in Charge) was so supportive. She cared about developing me as a Marine, not just as a lawyer. She always made it look easy. She’s great at her job, has two kids and isn’t afraid to be aggressive.”

Roberts knows she owes a lot of her success to those who supported her on her journey; and it’s those Marines who have helped her shape her leadership style. Additionally, Robert’s mother had a large impact on her development. She not only raised her, but helped inspire her to become the woman and Marine she is today.

“She had me at a young age,” said Robert. “She’s never let anything stop her. She never let anyone tell her she couldn’t do something. She also works in civil service. As a young mom, she started out as a secretary. Then she continued and developed her education and now she is a professor at a university.”

After going back to school, finding her drive, completing her officer training and earning the title Marine, Robert commissioned through the Marine Law Program and finds that her passion continues to grow as an attorney and Marine.

“I love being a defense attorney in the Marine Corps,” said Robert “I think it is a rare opportunity. It gives you something in common with your clients. At some point you’ve experienced the same things; running a PFT and CFT. You have a connection that you don’t necessarily feel when practicing civilian law.”

The Marine Corps Law Program offers many other opportunities other than defense attorney positions. Before becoming a Judge Advocate General lawyer one would need to graduate from law school, then complete Officer Candidate School, or OCS, and follow-on officer training. Afterwards, the individual would receive training on the military justice system by attending the Naval Justice School (NJS).

The basic aspects of military law are taught to judge advocates in training, as well as the Uniform Code of Military Justice, Criminal Law and Procedure, Operational Law, Trial Advocacy and Administrative Law.

This is an opportunity that helps someone grow as a lawyer, as a Marine and as a person. It allows you to gain the experience, but may also give important lessons to bring in real-life scenarios.

“I’ve been out to the feld,” said Robert. “I helped give advice on simulated casualties. There are so many different opportunities to take advantage of. You can learn civil law or military operational law. I learned a lot about ethics because of how many reports I wrote up during the exercise. You can be deployed with a [Military Expeditionary Unit] or even get attached to Special [Marine Air-Ground Task Forces].”

Robert says each experience has helped mold her into the leader she is today.

“If you’re nervous or unsure you can’t make it through, there is support,” said Robert. “Don’t doubt your ability. There are people out there that will tell you can’t do it, but there are also

people who will have your back. If you want it, you shouldn’t let the what-ifs deter you from pursuing your dream of becoming a Marine, moving forward and completing your goal.”

For more information regarding the Marine Corps Law Program, please contact the Austin Officer Selection Officer Marine Corps at (512) 585-0332 or scan the QRC.

We spoke to the women leading the fight in San Ant

This Mindful Monday with Mel🌿 We are bringing a