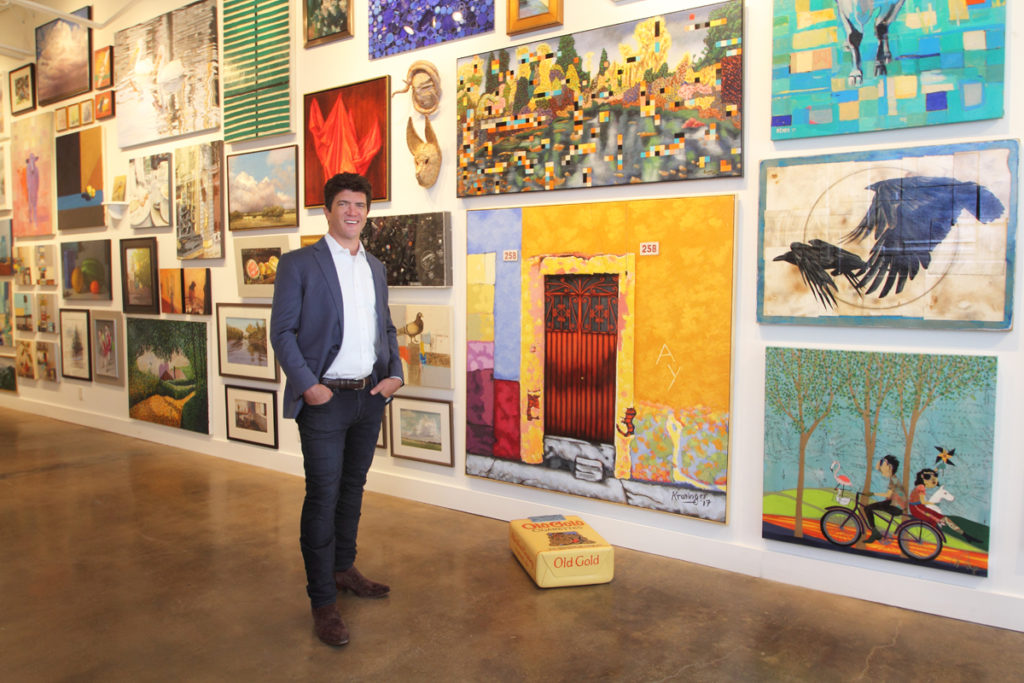 Tucked in the heart of Alamo Heights, you can find Robby Felder surrounded by a beautiful array of artwork. Felder Gallery might be new to the San Antonio community, but the Felder name is not. Larry Felder inhabited the art scene long before the conception of the gallery, but years later it is his son Robby who is the leading art aficionado in the family.

Being the son of an artist, a passion for art and creativity has been a part of Robby’s life from a young age. His mother and father originally founded the gallery, and, when the opportunity for him to take over the family business was presented, Robby knew this was the next step in his life. After a couple of relocations, Felder Gallery has finally settled and is hopeful for the future.

Not only is the business continuing to grow, but so is the Felder family. Soon the pitter patter of tiny feet will be heard within the gallery. Robby and his wife, Amory, are welcoming their first child, and he hopes to instill the love of art and creativity in her just as it had been in his youth.

How did you first get involved in the world of art?
Ever since I was a child I would “ooh” and “ahh” over creativity in others. My father was an artist here in San Antonio, so there were constantly creative people hanging around. I always looked up to them. Not only were they fun and smart, but I found it fascinating to witness their creative process.

Did you ever dabble in art yourself?
In high school that was definitely the direction I was headed with my life. Going into college, I wanted to follow in my father’s footsteps and pursued graphic art. I soon found that constantly being in front of a computer became mundane. I began hanging around fine artists and creatives, and I discovered a lot of energy and interest in that environment. I did apply a brush to a canvas a few times in my adult life, but I realized that there are people who have dedicated their lives to learning the methods to creating good paintings, and I would rather be around to support those people rather than try and become them.

How did Felder Gallery come to be?
When we were all out of the house, my parents imagined retirement down by the coast. My mom said my father had been painting in his head all our lives, so this was his opportunity to make that a reality. They then founded the gallery in Rockport. It ended up being more work than what they had in mind, but I didn’t want it to close down. I relocated the gallery to Port Aransas, which held many of my childhood memories and felt more youthful, energetic and vibrant. Later on, we made the move to San Antonio. We have been in town for almost two years, but this current location for one year.

What’s your process in choosing which pieces to showcase in the gallery?
I try to keep sales in mind when I am hanging, but it is also important to me that the gallery has a lot of energy. I want it to be a vibrant space, and, in order to do that, I believe you have to have a variety of work. When I hang the gallery, I personally want to walk in and feel fulfilled. A painting of cows or flowers might not be something I might hang in my home, but I want it all to work together as a whole here in the gallery. The worst thing that could happen is someone come in and say, “Oh, it is full of coastal landscapes.” Variety is key.

What is your role as a gallerist?
There has to be a relationship between a buyer and a gallerist. I would be ill-advising someone if I did not know them. The relationship is built when someone comes in and you begin talking about the paintings. You start to learn about someone, their likes and dislikes. When you go to someone’s house, you start to see how paintings and artwork fit into their lifestyle. You have the opportunity to see what might add value to their home and what pieces they gravitate towards. As a gallerist, I hope to be able to lead them in a direction that helps them become confident in their own thoughts and opinions.

How do you best advise a buyer?
“Buy what you like” is always a gallerist’s rule of thumb. However, I think the most memorable pieces are the ones you have really wanted for a while. I can have someone that comes in and is interested in a piece of work, but they aren’t convinced. I’m not a big pusher, so I encourage them to leave and think about it. Sometimes I think I’ve lost them, but then they come in months later and tell me they have been thinking about that piece for so long. That is always an amazing moment. They have been dwelling on it, done more research and are finally ready to buy.

What is the best part of being in this profession?
Adding something into someone’s life is the best part. You’ve gotten to know the artist as well as the buyer, and you get to see one benefit the other. In this gallery in particular, the wall is so busy with all the artwork. When you take one of these pieces and set it above a mantle with a light shining on it, it has its own space. It’s not just that moment after the sale that is the most rewarding, it is also everything that led up to it.

San Antonio is very family and community oriented. How is Felder Gallery taking part in that culture?
I went to an event with panel discussions with other artists and gallerists. One of the artists mentioned that one museum he was exhibiting with brought in a school bus of children and asked them to give their opinions on the paintings, which he really took to heart. That idea really stuck with me. I think being involved in the community is important in general, but after hearing about that, no longer did I think of kids with an ice cream cone in the gallery as a liability. We partnered with a local art teacher and hosted a children’s exhibition where they were able to exchange money for their artwork. We are repeating this next year, and, not only is it rewarding, but it gets the whole community involved.

What do you think is the future of Felder Gallery?
I think that after being in the gallery business for a while and having developed good relationships with artists and collectors, a lot of doors open up over time. I know I am the new guy here, but to artists, I’m not. Word spreads, and I have been able to connect with artists that weren’t available to me a year or two years ago. So much has led to these new opportunities and I think the future for us will be continuing to bring in more well-known artists.