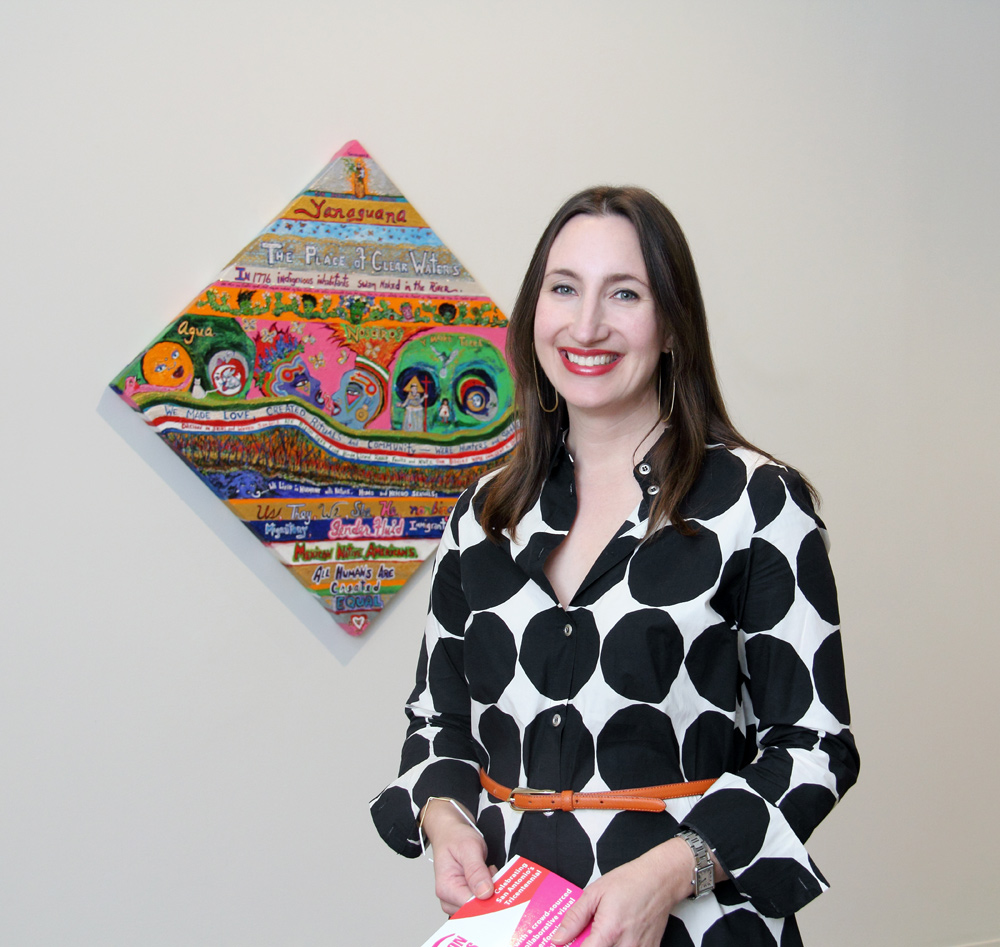 On the first day of February, a large crowd gathered at the Blue Star Contemporary for the opening of the second part of Common Currents, the massive Tricentennial art exhibit that involves six art organizations and 300 artists, who were collectively tasked with telling the story of our city through 300 new, original artworks. Each artist was asked to focus on a single year of San Antonio’s history, from 1718 to today, and each institution was responsible for 50 years of history. The Blue Star show, which is still on view, covers the period between 1768 and 1817.

Greeting and mingling with the visitors that night was Blue Star’s executive director Mary Heathcott, one of the two visionaries who dreamed up the huge collaborative project a couple of years ago. Her visionary partner was Mary Mikel Stump, the former director of exhibitions at the Southwest School of Art, who has since left San Antonio. Their brainchild, Common Currents, has now become a historic event in its own right and a fitting tribute to the Tricentennial.

What motivated the two Marys was a desire to emphasize inclusion and collaboration in the art world. And what better time to highlight the spirit of collaboration than the 300th anniversary of our city’s founding? As a result, the selection of participants in the six Common Currents shows was artist-driven, without curatorial input. Heathcott had no idea what the 50 Blue Star participants had created until it was time to mount the show.

“I am very pleased and excited,” she said at the opening, glancing at the action all around her. “All the artists are at their A game! I am impressed with the diversity and range that we have here — video, painting, sculpture, photography, performance art … This is a celebration of San Antonio history and a celebration of the wealth of artistic resources we have in our community. It’s a huge body of new work that has been created.”

Covering one of the early periods of our history, the Blue Star exhibit has works that deal with Native American themes, the landscape, the mingling of races, the secularization of the missions, the agriculture of the day, etc. Among the artists represented are such well-known names as Kent Rush, Ken Little, Trish Simonite, Kate Ritson, David Zamora Casas and others.

Four other Common Currents shows were scheduled to open later in February and in March.

Changes at Blue Star
Though the project has certainly enhanced her status on the local art scene, Heathcott had already won the respect of the community for her leadership of Blue Star. She took the helm of the contemporary art center in February of 2014 and has been busy fixing and improving things ever since. Why she took the job is pretty self-explanatory, she feels. “For anyone involved with contemporary art, Blue Star is an integral part of the story in San Antonio,” she said. ”It’s the first place that provided opportunities and platforms for contemporary artists in our community, it’s an essential hub for artists, and it was always a central reference point for me when I wanted to take the temperature of what was happening on the San Antonio art scene.”

What also appealed to her is that Blue Star had — and still has — the flexibility to respond to current concerns in art and society, something that institutions with large permanent collection seldom do. As an example, she cites Northern Triangle, from December 2014, an exhibition highlighting the plight of illegal immigrants from Central America. “It was like the major topic of the day at the time, and we were able to address it,” she noted. “That sort of scenario is what excites me the most about working here.”

In addition to exhibition planning and curating, Heathcott’s major priorities after she took the job were to strengthen the education programs and to create more professional opportunities for artists. Significantly, she created several channels through which artists from here and elsewhere can submit their portfolios to the curatorial staff and compete for opportunities to have their work shown at Blue Star. As a result, more than 800 artists have applied since 2014, and nine “acclaimed” exhibitions have been presented, exposing San Antonians to new artistic voices.

Wisely, she also hired a development director. “When I came here, the organization did not have a development staff at all,” she explained. “So, my first hire was Elaine Leahy as the development director. Together we have grown the budget significantly and diversified our funding sources. One thing Blue Star doesn’t have yet, however, is an endowment. I worked with the board on a strategic plan in 2015, and creating an endowment is part of the plan. But we are just at the beginning.” All of that, while also upgrading and renovating the building itself, which reopened in time to host the 30th anniversary of the institution.

So Much Happens Here
Born and reared in Houston, Heathcott first came to San Antonio to attend Trinity University, where she also met her husband, Maxwell Heathcott. Though she had been exposed to the arts throughout her childhood, she never thought about it as a career. What changed her mind was a required art history class at Trinity. “It was an ‘aha!’ moment for me,” she recalled. “It connected to a lot of my interests, such as the study of civilization, anthropology, literature. I discovered that everything happening in the world is reflected in the visual arts.”

After earning a degree in art history and a brief stint at the San Antonio Art League Museum, Heathcott moved to Chicago, where her husband planned to attend culinary school. While there, the young woman got a master’s degree and followed that up with several years of development work at the Museum of Contemporary Art, Chicago. The job made her realize just how important contemporary art can be in creating a dynamic cultural scene and how important it is to establish multiple community ties.

But when the opportunity arose, the Heathcotts returned to the Alamo City. “I am going to be a lifelong San Antonian,” she said with conviction. “So much happens here.”

Following eight years at Artpace, where she handled a variety of administrative jobs, including interim managing director, Heathcott is presently where she would like to stay for a long time and where her development and operational skills are much needed. At the same time, she is extremely supportive of artists’ work, and they appreciate her in return. “Mary is the best thing that happened to Blue Star,” said Zamora Casas at the Feb.1 opening. And several artists, including Trish Simonite and Libby Rowe, praised Heathcott’s leadership on the Common Currents project. “It has a lovely unifying effect,” noted Rowe, who teaches at UTSA. “I was excited to be one of the 300… We are all part of the same big exhibition, all of us showing as one, in a way.”

Heathcott’s love of contemporary art runs deep, though she is quick to emphasize that she is not an artist. Art is everywhere in her home in the Lavaca neighborhood, she said, and she would like to get more. “I am lucky that my work is also my pleasure. I love to be surrounded by artwork.”

So what advice does she have for people who have a hard time relating to contemporary works?

“Look a little deeper and ask questions,” she said. “We at Blue Star try to provide context for the works to help with the understanding. We grapple with that question — how much context is needed? We offer educational programs with our exhibits that give us additional opportunities to offer information about the ideas behind the work. And our visitor ambassadors are always prepared to talk about the artwork, too.”

The five other Common Currents shows are on view at Artpace, the Southwest School of Art, the Carver Center, the Guadalupe Cultural Arts Center and the Mexican Cultural Institute.