The Times They Are a-Changin’

Bob Dylan said it best with the title of his 1964 track, and no one knows more about change and the ability to adapt to it than Bjorn’s, an audio, video and home theater store. With its ability to keep up with ever-evolving technology, Bjorn’s continually offers customers the latest in home automation, custom installation, audio, video and home theater alongside the signature service it is so known for year after year. And no one understands the zeal, forethought and willingness to sustain its long-standing success more than vice president Kris Dybdahl. From the time he was in high school he has worked his way up the company ranks, and it’s helping him to drive the store his father opened more than 40 years ago into the next direction.

Learning more about Dybdahl and Bjorn’s early history, the Bob Dylan musical
reference resonates in more ways than one. When his father, Bjorn Dybdahl, first opened the store back in 1975, it began as an audio store. It was his love for music and high-fidelity components that inspired the start of the company. Fast forward years later: Kris Dybdahl was 16, still in high school, and sharing the same affinity for music and movies as his father. He first began working at what was known back then as Bjorn’s Disc Store. For many years, the store flourished through every recession and the effects of 9/11 on the economy, experiencing a heyday in 2007.

Following a downward turn in the economy seemingly overnight in 2008, the last 10 years have seen the store re-establish a foothold in the industry, getting back on track with a solid staff, signature service, and with Dybdahl in the wings, a plan for its next steps. His dad still plays an active role in the company’s operations, which keeps Dybdahl mindful of the balance and integration of where the store has been and the next level where he wants to take it. 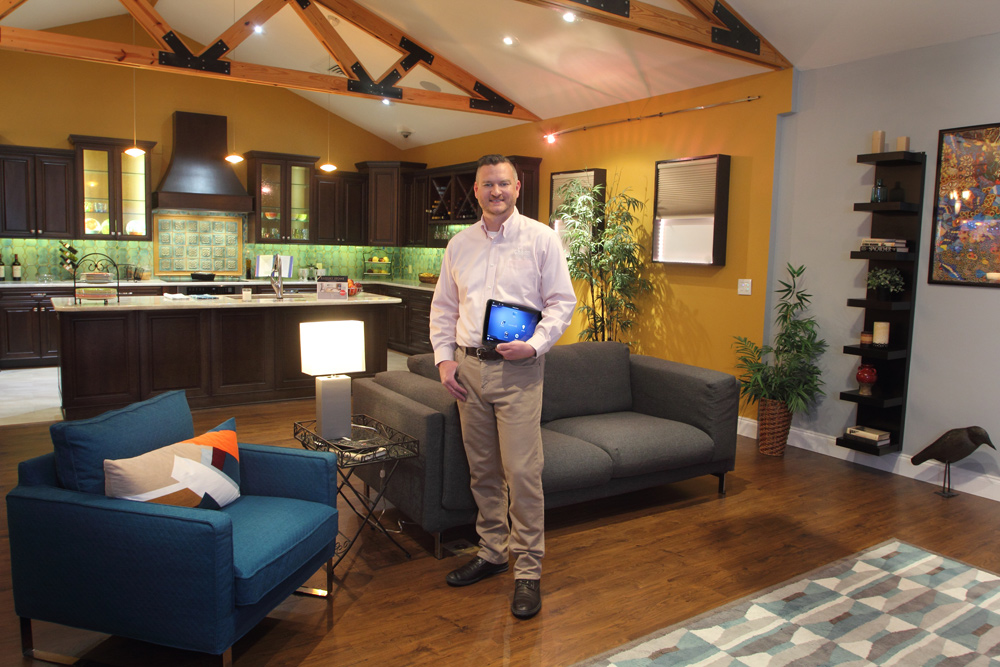 What does a typical day look like for you? Does it change day to day?
Yes, and to explain that I’ll give you a brief history of the store and myself. I started working here back when it was Bjorn’s Disc Store, and it was located off Broadway and Bitters. We sold CDs and rented laser discs and were one of the biggest renters of laser discs in the country. I would go there after school and work as a clerk, because I love music and movies. After high school I tried a little bit of college, but I learned school just isn’t for me. I’d rather be out doing things, so I kept working there and became manager of that store. From there, I went on to the office area and learned accounts payable/receivable, and when we moved to our current location, I came back to the sale side of things for a couple of years and eventually managed our small electronics store, The Gallery of Small Electronics. I then did facilities, more sales, warehouse and deliveries, and truthfully I didn’t know what I wanted to do. But finally I fell into what kick-started everything, — computers. They were coming on with the internet, and I stepped in to do upgrading for us to Windows XP. That got me into the role of IT for the store. During that time we didn’t have a website so I taught myself HTML and built our first website, and that was from 2004 to 2011. Losing our marketing person kick-started the next portion for me, which was the marketing side of things, sharing ideas on promotion and so forth. At that time I had already developed the love for the company and wanted to be included in the future. I worked alongside my dad, doing little things, and the next thing I know I’m doing commercials.

Over the years I grew into the spokesperson, appearing in commercials, and for a few years I really felt things were changing on what we needed to do to position ourselves for the future. That’s when I pushed to move forward in the company, becoming general manager and now vice president. So to answer your question, yes, I still get involved with all these things I used to do, plus trying to push the newer and next things. In fact, just a couple of months ago I was cleaning out our old location after 17 years of it being a storage location. I was there cleaning it with our facilities guy.

What do you see as the future for the store?
With our new direction it’s not a lot of retail shopping, it’s more installation jobs. We’re in an in-between time right now, I’m pushing to the future, and my dad is still here in the store sharing what he knows from the last 42 years. There are areas I like to focus on for what my dad would call the retail side, which is audio. (My dad is an audio guy.) There’s a whole audience to show what can be done with audio, whether it’s better sounding high-resolution audio, vinyl or surround sound. A couple of years ago, Dolby Surround came out with a new format called Atmos, which is the biggest jump in technology in 20 years, adding a height channel. I tend to get more excited about the smart home side. So there’s a whole sub-section of not only going after the smart home customer and installation, but audio is still a legitimate thing. And on the TV side, we will always have TVs, but it’s less of a focus. The good thing is all of it still goes together, but it’s just a new focus.

So is this the direction you see — do you want to focus more on the smart home?
Yes. It started three years ago after attending the Consumer Electronics Show, which we do every year. I saw the beginnings of smart home, and I was in awe. I understood it because of my background in IT. We’ve always done installation from day one with my dad when he would go out and install speakers. Installation was never something we really focused on, even promotion wise, but with smart home being profitable, it cemented in my mind that this is where it’s going. With things like Amazon Alexa and Google, that is what is spurring this new interest in the smart home. It’s still a small portion of the population that knows about it, but not everything until you show them.

So here in the store we’ve always had this house, but a year ago we ripped it down, specifically for smart home. We can show Amazon Alexa, lighting, locks, AV distribution and adjusting shades. We also have a second voice assistant from Amazon in here that I would love to be demonstrating, because it’s ahead of its time. Things are still being worked out on it, but I will be “demoing” it very soon. This new system uses artificial intelligence and machine learning, but it’s different from Alexa in that you can talk to it like a normal thing. “I want to turn on the lights in the kitchen and watch Game of Thrones Season 1,” versus how Alexa functions, where you must state, “Alexa, turn on the lights.” It will be here soon, and we will be having a launch party for it.

With all these changes in technology, what is your favorite new innovation?
With the smart home, I love how it makes your life easier, can save you money, and it’s entertainment. If it’s set up right, it will let you have time to do what you really want to do. What I enjoy and what the store is built on, as well, is educating the customer. We’ve always been a place where you can come and learn. We absolutely want you to buy from us, but if you don’t, that’s OK, and at least I know you’re making the right decision. We’ve always done seminars. A few years ago I started Bjorn’s University. We took a break with it to reclaim that seminar space, but it will be coming back this year in a different format. I’ve missed it, because it’s something I enjoy, and my dad does as well.

Since things have changed with what we’re doing, it’s opened up other groups to us: designers, builders and architects and women. Even before the smart home, female interest in what we do had been tracking up. We did the store originally to cater to that upswing with each room a vignette so people can see their home. I’m glad to see women getting interested. I’m looking forward to bringing in all groups, getting back to the educational side of things to bring us back to the forefront of some of the newer technologies, now that we’re set.