Just past the Brooklyn Avenue bridge on the near East Side, the street name changes to Burnet, and a copper-colored building complex comes into view on the left. That’s the attractively designed $8 million Alamo Beer Brewery, which celebrated its official public opening in March 2015. The facilities include the brewery proper, an office building and a beer hall, with a beer garden in the middle.

But company founder Eugene Simor started making his signature Alamo Golden Ale years before through a contract deal with Real Ale Brewing, a small craft beer operation in Blanco. His big break came when Ben E Keith Beverages stepped in to distribute his product all over the region. Today, you can find Alamo Beer’s ales and lagers in many stores, including H-E-B.

A native Californian, Simor holds a degree in industrial technology and worked as a sales engineer for Johnson Controls, Inc., where he was recognized with the National Sales Challenge Award and other distinctions. At the age of 30, wanderlust pushed him to leave his job to embark on a year-long journey of sailing, working on boats and visiting remote Indian Ocean islands. Back in the U.S., he eventually relocated to San Antonio and for a while ran a housing redevelopment business called the Goulash Group, before coming up with the idea of naming a craft beer after the “cradle of Texas liberty.” His current facility is only half a mile away from the shrine.

Simor is involved in a number of community boards and business organizations, and his beer hall and garden host a variety of community events. He and his wife, Neriza, have four children. 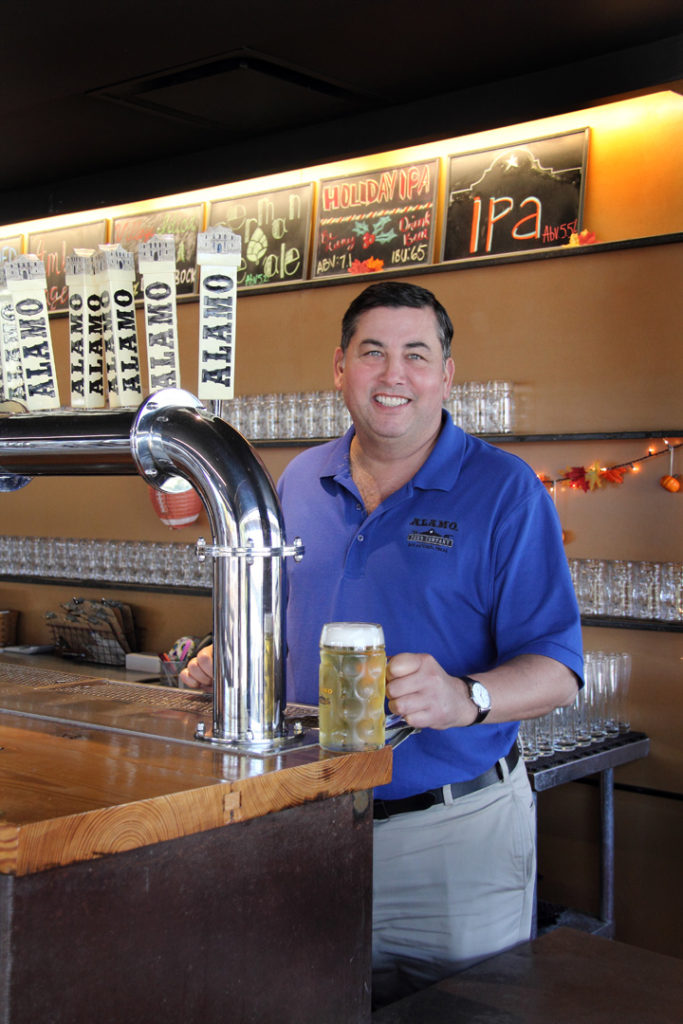 What brought you to San Antonio?

I had just returned from traveling the world and had a college roommate who lived here. So, I kind of came to visit San Antonio and never left. It’s a very welcoming community, housing was still affordable, the weather is pretty good. It just seemed like a good place to grow a business and start a family.

Were you always a beer aficionado?

My taste for drinking beer started during my university years. There was this small place which featured beer from all over the world. If you sampled all the beers from 40 countries, you received a plaque with your name on it. That was all the incentive I needed to try all the different beers. It stuck with me. Whenever I traveled, I wanted to try something new… When I came here, there were only a couple of small craft breweries, and all closed soon after. I came up with a marketing idea to have a brand called Alamo. I applied for the trademark, and it was through that process that I found out that there was a beer called Alamo from 1883 until Prohibition. But no one had claimed it since. The brand name goes perfectly with San Antonio and Texas. The story is already built into it; I don’t need to make anything up. And when you take into account what’s going on with the craft beers versus the big companies, it’s a little like the-few-versus-the-many in the Battle of the Alamo. Being independent and standing up for what you believe in is kind of what motivates the craft beer movement. In fact, our slogan is “Fiercely Independent.”

Tell us about the early years.

For the first 12 years my beer was brewed in Blanco, and I was doing all the sales, marketing and delivery in San Antonio by myself. I started real small, and I proved that my concept worked without having to spend a huge cash outlay to build a brewery right away. (For that part he used his savings.) But when time came to build the present facility, I was not a startup company. I already had existing sales, the brand was known, and I had a distributor in place. So I was able to secure a $5 million loan from the Small Business Administration and $3 million from local investors.

In addition to the name, how did you make your brand stand out in a very competitive market?

What made it popular is community outreach, which we still do. We provide beer for many charity events, and we host functions here at our facility that serve as fundraisers for the nonprofits and as consumer awareness occasions for us. Our beer hall and courtyard are open to the public, and we are family-friendly and pet-friendly. It’s become a real gathering place. We also do about 40 in-store samplings a month throughout San Antonio and beyond.

Who formulates the beer recipes?

For years, we only had the Golden Ale, but when we started here, we launched four different styles of beer. Selecting the styles was a group decision, but fine-tuning it down to exact formulations was up to our brewmaster, James Hudec, who has more than 20 years of experience, including three years of training in Germany.

I drink our Pilsner. It’s a traditional Central European-style Pilsner. It tastes exactly like what you would get in the Czech Republic.

The neighborhood and former mayor Ivy Taylor supported the building of the brewery in the present location. Has it become somewhat of a catalyst for further development in this area?

I think our project did not kick off the redevelopment of the area, but it gave it a stamp of approval. It communicated that it was OK to reach over to this side of the tracks and invest money. I think our project gave a boost to what was already happening. The group SAGE, San Antonio Growth for the East Side, coordinates and keeps track of what’s going on. Everything, from several bars and restaurants to other small manufacturers has opened. The Dignowity Hill Neighborhood Association is very active, and that, too, has led to increased growth.

You wanted to talk about women and beer.

Yes. So many of the large companies have taken the frat approach to advertising beer, and most of that is offensive to women. I think more and more women have opportunities to try craft beers. When they come in, we talk to them about what they like to drink, and we usually find one of our beer styles that will appease wine drinkers . . . Craft beer is a lot more appealing to women. They just need to take the time to discover it.

*Mr. Simor’s comments have been edited for publication.