The Moipei Triplets Gain a Following 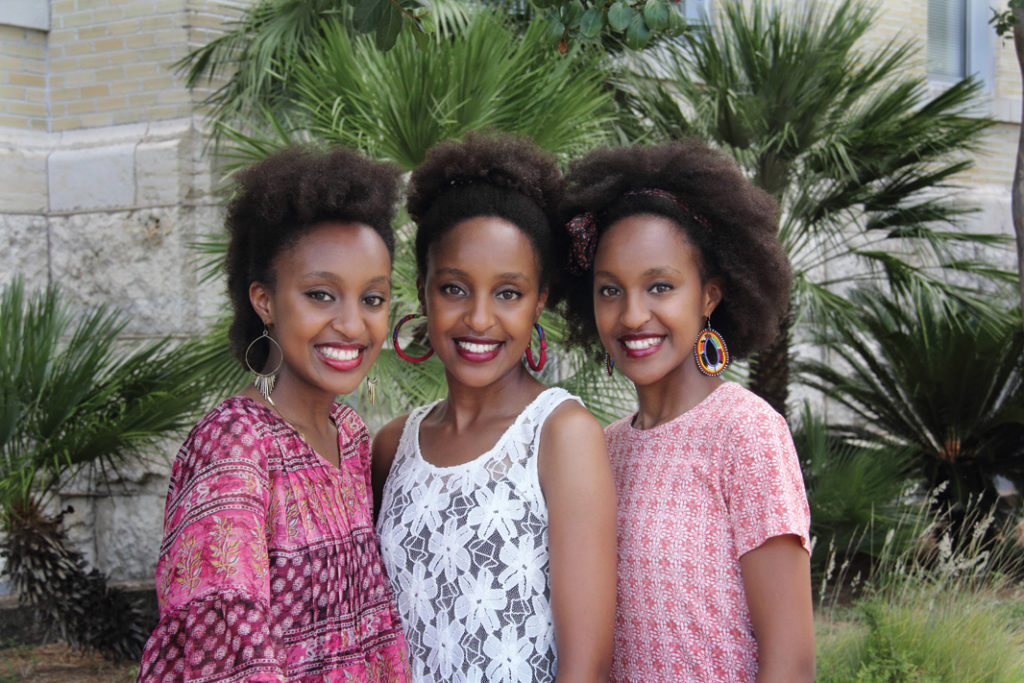 On a balmy June night, more than a hundred people packed the Little Carver Civic Center to see three young women from Kenya perform American songs, mostly numbers from popular musicals. Clad in bright red dresses and sporting curly wigs, the singers — known as the Moipei Triplets — kept the audience enthralled with their clear, smooth voices and even smoother harmonies. Songs like My Heart Belongs to Daddy, Send in the Clowns, Blow Gabriel Blow and The Sound of Silence followed each other, plus hits from Les Miserables and the recent blockbuster, Hamilton. Along the way, they threw in a bit of light humor, a playful reference to their birth as triplets, and spiced up the charming musical cocktail with the lovely Spanish classic Cucurrucucu Paloma.

For the sisters — Marta, Maggy and Mary — musical theater is a relatively new love. Upon arriving in this country to study vocal performance at St. Mary’s University, they felt a bit homesick, they explain a few days after the concert when we gather in “the guitar room” at St. Mary’s music school to talk. “That’s when you start looking for things that will help you to keep going,” says Mary. “Musical theater brought a new light into our lives.” To which Marta adds, “I was so impressed by how people could sing, act and dance, all at the same time, and do it for multiple shows a week. It was so cool, and it made me happy to watch them online.”

The sisters soon learned that there were several places in town where stage shows could be seen live, such as the Woodlawn Theater and the Majestic, where they later saw The Phantom of the Opera and Finding Neverland. But their repertoire includes other styles as well, from Kenyan traditional music to art songs, jazz, gospel and pop. “We do what sounds good to us,” notes Mary.

Now 24, the siblings grew up in a musical family in Nairobi, and for years performed with their younger sister, Seraphine, as a quartet. Their parents realized that the triplets had a special talent for music when on their second birthday, Mom and Dad sang a short prayer to them, and the kids “echoed the melody back to them in perfect pitch.”

“So, when we got a little older, we started competing in music festivals,” explains Maggy. “Our first was at age 8, the Kenya Music Festival. We won in our age group and did it again for six years in a row. That’s how it started, and we never stopped,” she concludes with a laugh. As 12-year-olds, the sisters were invited by UNICEF to represent their country at a youth festival in South Korea, which was also the first time they traveled abroad. Too young to be intimidated by the responsibility of representing their country at an international event, they “just had so much fun.” After the fest, they were chosen to be the first “child ambassadors” for Kenya and subsequently traveled to many countries in Africa, as well as to China and Venezuela, to perform and carry the torch for their homeland. More recently the quartet was honored to perform at the inauguration of Kenyan President Uhuru Kenyatta.

From Nairobi to San Antonio
What brought the sisters to San Antonio is one of those circumstantial chain of events that seems unlikely until it happens. Their family knew Father Martin Solma, the head of the Marianist Province of the United States, who had lived in Kenya for 25 years. When he revisited Kenya a couple of years ago, he brought back with him a Moipei sisters’ CD, which he played for the president of St. Mary’s. Subsequently, the entire Moipei family was invited to visit in February 2014, when the girls were on a six-state tour of the U.S. A welcoming dinner with the school’s president and the board, combined with full scholarships, convinced Mr. and Mrs. Moipei that St. Mary’s was the right school for their daughters.

Though Maggy “was originally scared” to attend college so far away from home, she and her siblings are enjoying campus life. “It’s a small community where everyone knows everyone else,” they say, practically in unison. “It’s been a real home away from home. We like to walk around campus at night, and we feel safe. The people are kind, and the food is not that different.” And they have discovered new things to love. For Marta it’s mariachi music, for Mary it’s Tex-Mex cuisine, and for Maggy “it goes back to musical theater.” The one thing they find hard to adjust to is the chaotic American measuring system, having grown up with the logical and easy-to-handle metric one.

The three tend to do everything together, sharing classes, friends and extracurricular activities. Though they can tell each other apart, Mary admits that looking at photos she is not always sure which one she is. In public, they usually elicit curiosity wherever they go. “Oh, triplets! Are you triplets?” people ask. Another question they get is, “What’s it like in Africa? Have you ever met a lion?” Well, almost. Not long ago, a few lions did escape the confines of a national park near their high school and roamed the streets for a while. One ended up killed by a car, and the other two were tranquilized and returned to the nature reserve, but the sisters did not personally witness any of that. However, they remember seeing giraffes and buffalos while walking to school and recall one instance of a buffalo staring intently at them. “It’s cool as long as he doesn’t charge,” quips Mary. “Buffalos don’t like humans.”

When it comes to music and performance, the sisters are usually on the same page, but outside of music “not so much.” Still, friends tell them that they feel like they are hanging out with a single person. None has a boyfriend at this point. Career comes first. 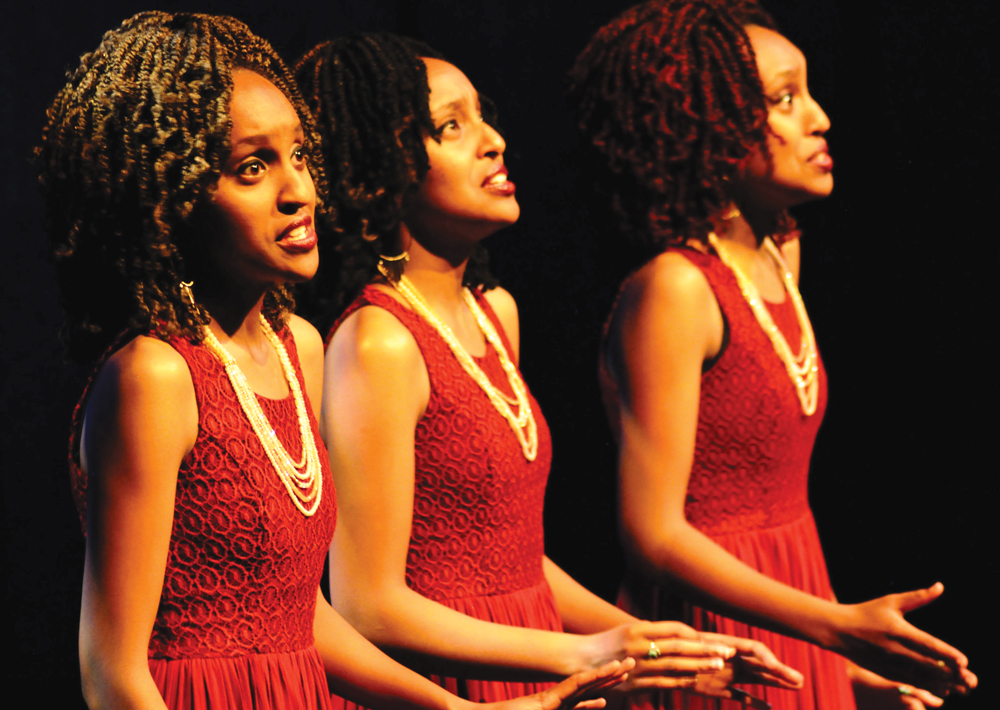 That career was given a boost when Alamo City Opera founder Mark Richter discovered their clarion voices. A friend sent him a cell-phone video of the triplets’ open-mic appearance at a Broadway Nights event at the St. Anthony Hotel. Despite the poor audio quality, Richter “heard something very special” and lost no time trying to locate the talented trio. He then wrote to their father, who had been managing them, to explain that he would like his Richter Agency to manage the girls’ career.

“They perform at an inspiring, virtuosic level,” says Richter, “and as I got to know them, I’ve found that they are delightful, smart, charming girls. They have a great future in the music business, and I hope to help them get to the next level.”

Since 2015, the group has had 25-30 performances locally, including appearances in churches and schools. “And they just sang for Mayor Ron Nirenberg’s inauguration,” notes Richter. “The crowd went crazy.” That was followed by an invitation to perform at the opening ceremony for the conference of city managers and mayors, scheduled for October at the Convention Center. Some 3,500 people are expected to attend. The Moipeis will also sing in Alamo City Opera’s September production of Speed Dating Tonight at the Buena Vista Theater. What’s more, the composer, Michael Ching, has written a new piece for his opera, especially for the trio.

At about the same time this fall, they will be having their senior recitals, which are pretty much like the most important exams for voice students. That’s where each student really gets to show off her vocal chops in a carefully chosen repertoire of classical songs from different composers and periods, in at least four languages — English, French, Italian and German. We are talking Mendelssohn, Debussy, Schubert, Rossini, Samuel Barber and the like.