A Poet and a Leader: Sheila Black

Opening a special reading at Gemini Ink on April 1, executive director Sheila Black greeted a crowd of about 30 people with these words: “This is one of my favorite programs of all the things that Gemini Ink does.”

She was referring to the mentorship program that brings together established and emerging writers in a mentor-mentee relationship that offers a precious opportunity for the mentees to receive sustained guidance on a work in progress free of charge. Black praised the current mentors — poet Connie Voisine and novelist Amanda Ward — for taking up the task and for promoting “the art of writing and the art of communication, which is what Gemini Ink is all about. 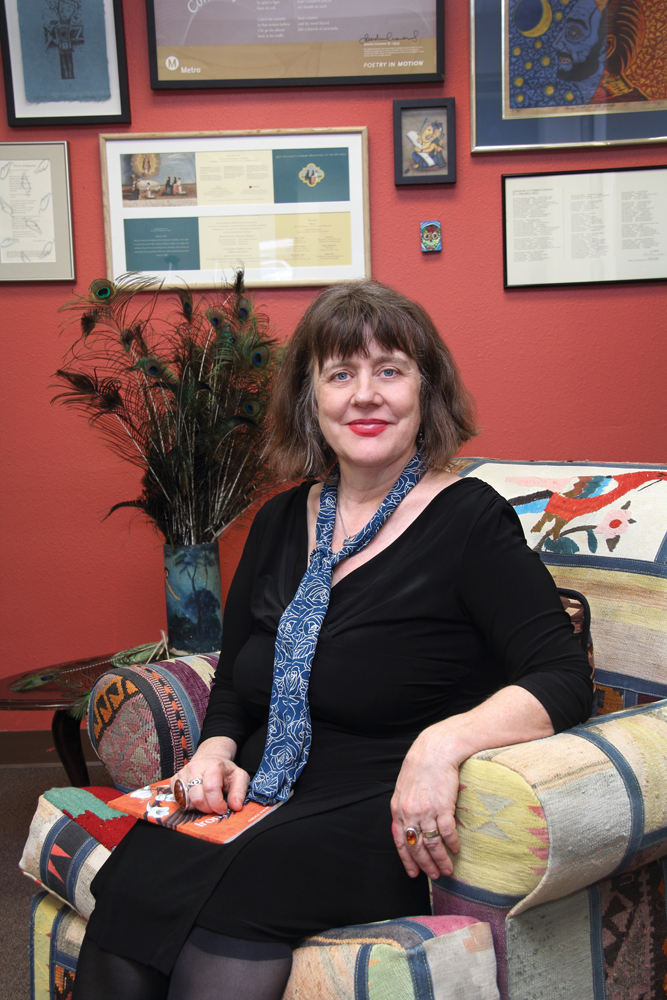 “Through writing, you become a more engaged human being; writing is essentially an endless quest into what it means to be a human being. Writers invite readers to go on that journey with them,” she explained.

Black has been on that journey for a long time, as a poet, teacher, editor and a literary arts administrator. In the fall of 2012 she moved to San Antonio to assume her current position.

In an interview with this columnist in January 2013, the new director discussed her goals for our city’s only independent literary organization that’s truly open to all who are interested in writing and literature. Almost five years later, she’s pleased to note that progress has been made across the board, from reviving the mentorship program and restructuring the main educational classes for writers, to a vastly expanded Writers in the Communities program (WIC) that sends writers into diverse community settings to work with marginalized students and adults on finding their own expressive voices.

“When I came, most classes were one-day workshops (often just several hours). I thought that was problematic,” she said. “If you are going to learn how to write, you need time to work on it. Switching to the multi-session format has worked very well. We have a robust Creative Writing Classes program now. The mentorship program is going strong, and the number of people served by WIC has gone from 401 in 2012 to 1,731 last year. Gemini Ink worked with only 10 or 11 sites back then; now we are all over the city at many, many sites. That’s a big change. We have also doubled the budget in the last five years.”

Black, who is well liked by everyone who knows her, is also proud of free readings and discussion events with notable Texas writers, which are designed to appeal to people who are “passionate readers” but not necessarily writers. In addition, the well-established Autograph Series is another successful initiative that brings nationally known authors to San Antonio to read and interact with fans at both a free and a ticketed event. “It all creates a literary-rich eco system,” remarked the director.

A new contribution to the literary scene is the summer Writers Conference, which was successfully launched last year. “I think it was a brilliant idea,” noted Black, “I am a member of the AWP (Association of Writers and Writing Programs), which has 18,000 members. I saw firsthand how writers like to get together to exchange ideas. I thought we could create something like that here in Texas. Alexandra (Van De Kamp, a colleague) and I thought maybe we could get some 30 people to come the first year. Instead, 181 registered for the conference, and more came to public events. We had 38 panelists. It was a super fun event.”

The theme for the 2017 meeting, scheduled for July 21-23, is Writing For Change, and some prominent authors and industry professionals were already lined up at the time of this writing, namely Pablo Miguel Martinez as the keynote speaker, as well as Brian Turner, Octavio Quintanilla and Marilyn Atlas. Writing is about change and transformation, commented Black. Ideas and communication can change the civic conversation.

Poet and Manager
Born in Minneapolis while her father was getting his Ph.D., young Sheila soon found herself traveling all over the world courtesy of Dad’s diplomatic career. “It’s hard for me to say where I am from; we spent so much time away from the U.S.,” she said. “When I got to college, I realized how little I knew about America.” Still, she claimed her American identity when it was convenient. As a budding high school entrepreneur, she made and sold American sandwiches in Britain because people loved them and she had access to American foods. But the young woman also saw a great deal of poverty in many places, which taught her that life could be uncertain and precarious. Beyond that, she learned to respect other cultures and understood that her native country was often seen as problematic in other parts of the world.

Yet moving around the world was not the only defining experience of her childhood. She was born with a genetic condition called X-linked hypophosphatemia, or XLH, which causes short stature, bowed legs and soft bones, according to a moving article she wrote about that aspect of her life for the New York Times. At first, doctors thought that her mother was not feeding her properly, so it took a while before the correct diagnosis was made. At 13, she had a surgery that considerably straightened her legs, and she was suddenly seen as more socially acceptable. “I realized then how deep is people’s fear of disability,” she observed. “That was ultimately my motivation for becoming an advocate for removing barriers that the disabled face every day… People are more than their bodies.” Several years ago, she co-edited Beauty Is a Verb: The New Poetry of Disability, which was designated a Notable Book of 2012 by the American Library Association and made her famous beyond the strictly literary circles.

Young Sheila discovered poetry very early in life. For a while she attended a school in Sao Paulo, Brazil, where the students were made to memorize poems. “I can still recite the verses. I was good at that, I liked the sound of poems, every word had a weight,” she recalls. In high school, she was already composing her own poems, but her life took a detour into “commercial writing” after college, when she produced a series of children’s books for a book-packaging company. It wasn’t until her mid-30s that Black returned to poetry while living in New Mexico with her husband, Duncan Hays, with whom she has three children.
­­­

She is the author of four poetry collections, including two recent ones, Wen Kroy (Dream Horse Press, 2015) and Iron.Ardent published this year by Educe Press. In 2012, the U.S. Poet Laureate Philip Levine chose Black as one of two poets to receive the Witter Bynner Award, a prestigious recognition that you cannot apply for. Levine described her as “a consummate poet of memory who seems able to inhabit all the various women she is and has been… Hers is a poetry of feeling, and the whole panoply of emotions — from love to rage — is present and earned.”

Writing is a discipline, she believes: “You set the table and inspiration will come. You have to train yourself to be receptive, to see the world around you, to be in the moment.” But you also have to read a lot, be aware of trends in contemporary poetry and be willing to revise.

Though poetry is her passion, Black also pursued a career as a development executive for two Las Cruces, N.M., organizations, including seven years with the local Colonias Development Council. The combination of her literary and fundraising skills made her an ideal choice for the Gemini Ink job. She was hired just a few days following her job interview here. Gemini’s board chair Michael Soto lavished praised on Black. “Sheila has an incredible excess of energy for all things literary,” he noted. “And the wider community is the beneficiary of her efforts to make San Antonio a more literate and literary city.”

And Black intends to “keep the momentum going. I feel like I am in a good place,” she said, simply.