When this doctor tells you to eat right and exercise, you only need walk outside the clinic door to take a step in that direction.

It’s there, in the great outdoors of a San Antonio Medical Center parking lot, that Dr. Lillian Chou and her staff at the Aurora Cancer Center grow everything from olive trees and cactus to herbs and vegetables in galvanized watering troughs and window boxes and, in fact, anywhere there’s a mound of dirt.

“If you have sunshine, you can grow food,” Chou says.

But while her patients are free to clip a sprig of rosemary, harvest a few peppers or pick a peach from the branches of her urban orchard, Chou’s gardens are more than food. They are meant to inspire sustainable living.

“There are many ways you can do your part, but the best way is an edible garden,” Chou says. “The rain and sun are what heaven gave us. The leaves are the solar panels. The plants collect water naturally.” 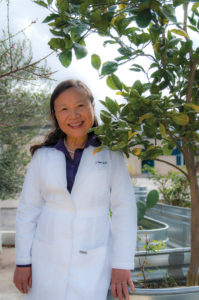 It’s a way of life for Chou that began when she was growing up in Taiwan. Her dad was a teacher, so the family of eight grew a garden to supplement their food sources, and her mother loved to cook what they grew. “In Asia, we don’t plant things just for aesthetics, even though many food plants are aesthetically pleasing,” she says. “In Taiwan, a fruit tree is also a shade tree.”

Chou came to San Antonio when she was 27 years old to attend a residency program in radiation oncology at the Cancer Therapy and Research Center, then moved to Houston, where she met her husband. They bought their first home in a nice neighborhood in Lubbock, and Chou planted peach and pear trees.

“When they were blooming, it was very beautiful. But in 1989, nobody would have edible plants in the front yard, and they hired others to work in the yard for them,” Chou says. Her husband, concerned about fitting in, chopped the trees down. “Only one pear tree escaped,” says Chou, but that didn’t deter her.

Going behind his back, she purchased 259 acres — “a sad chemical farm that grew cotton every year” — and started the city’s first organic farm, growing peaches, pomegranates and jujubes, working toward her dream of sustainability and education. Chou invited groups of students from local schools to visit the farm on Earth Day and helped them plant their own edible schoolyard gardens.

Today, she grows food on acreage she owns in South Texas (ruby red grapefruit grows well there), but also in Dallas, San Diego and near Nashville, where the farm also serves as a rehabilitation facility for people recovering from drug and alcohol addiction. “We know that nutritional imbalance can cause depression, and nature is therapeutic,” Chou says. “What could be better than farming?”

She also commutes weekly between her clinics and their “urban gardens” in Lubbock and San Antonio and still travels to Taiwan twice a year to visit her 87-year-old mother. Back at home, she plants and eats what she grows and cooks herself — lemon grass and lime leaves for pho, loquats in bread, pumpkin in oatmeal, salads with cactus, sage and aloe vera.

Though Chou recognizes gardening isn’t for everyone and encourages others to learn more about edible plants and hire a gardener if necessary, she says everyone has space, even if it’s just a balcony.

But Chou, at age 61, is a breast cancer survivor who relies on gardening for exercise as much as a healthy food source. In her practice, she talks to patients diagnosed with breast cancer about exercise and eating right as a way to battle the disease. The Aurora Clinic holds workshops and potlucks to share seeds, food and information, like the fact that loquats are good for the immune system and lungs, says Chou.

For sustainable growers like Chou, nothing goes to waste, not even the water she uses to wash dishes. Using soap instead of detergent allows Chou to use the “gray water” for her plants. All her plants are edible, including plants like garlic chives and carrots, for ground cover, and she composts as well.

On a recent day, Chou was eager to report that she had just harvested more than a dozen papayas. They grew on a plant that grew from a seed — one she saved after enjoying the fruit purchased at H-E-B.

“It’s a way of life for me,” Chou says. “Some women spend time doing their makeup, some people like to shop. But what makes you happy? If you are happy, then you have time for it.”