Artist Betsy Dudley works out of what is probably the most inviting studio that I have ever seen, and I have seen many art studios. Though there is inevitably some clutter, there is also a sense of space and peace, with abundant natural light pouring in over everything, including her airy, elegant wood sculptures and tables covered with colorful fabrics. On this particular day, she is focused on her current tapestry work, preparing for an exhibit at Cappy’s Restaurant in a couple of weeks. 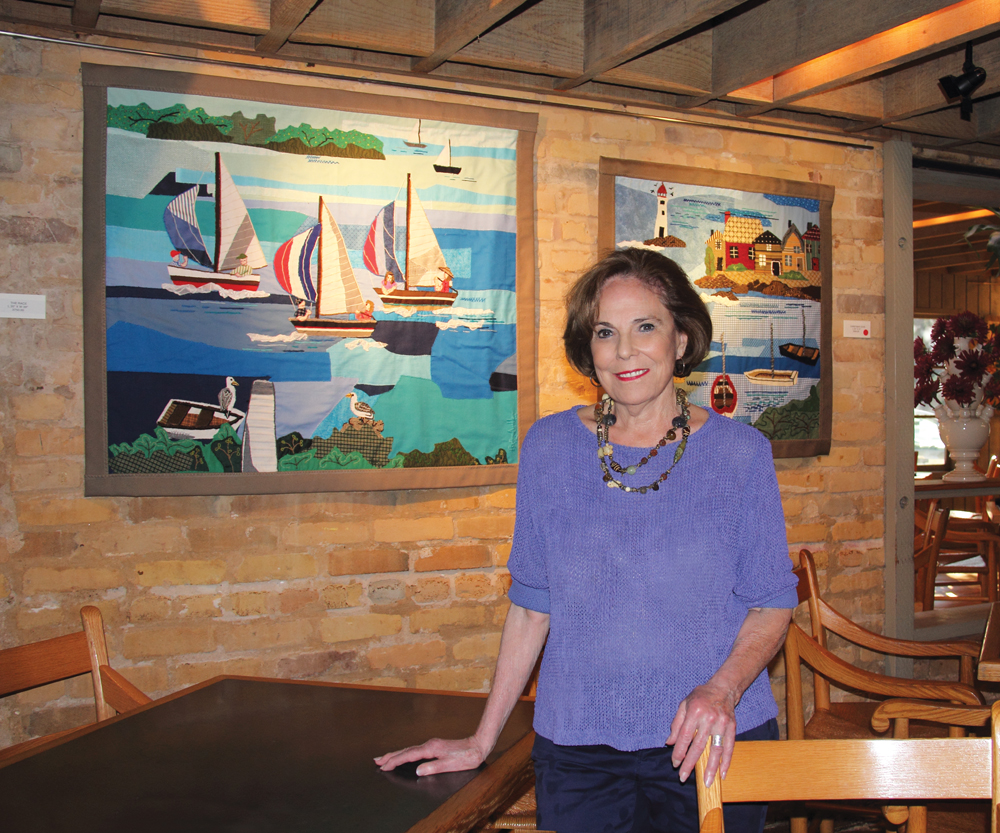 Dudley’s designs are mostly drawn from memories and life experiences, she explains, as she guides me toward a wall packed with eye-catching panels, most representing nature scenes, such as birds perching on leafless branches, appropriately titled Winter Gathering; cute critters cavorting in Into the Wood; and a beachy New England scene complete with a lighthouse. But there are also images of the Madonna and St. Francis, as well as an exquisitely designed and stitched bouquet of white flowers, which the artist says she saw in a dream. The piece de resistance, however is San Antonio, a 60-by-66-inch hanging that took her three years to complete. The composition features just about every local landmark, from the Tower of the Americas and the Alamo to river barges and The Pearl. Though it is not for sale, it will be included in the show.

The technique she uses is often referred to as “applique tapestry” with embroidery, the basics of which she learned from the master of the craft, Martha Mood, who lived in San Antonio in her later years and died in 1972. “It’s like painting except you are painting with fabrics,” says Dudley. She starts with a background panel onto which she stitches a variety of patches to add depth and visual and textural complexity. The next step is design, which requires her to shape and cut all the elements from different fabrics and then stitch them on to create the image she wants. Upon closer examination, one can see that the appliques are further creatively embroidered to produce a range of effects, much like a painter would do with paint. “It’s a lot of work,” admits the artist, who has only recently returned to doing tapestries after a long hiatus.

Though her tapestries sell well and are often commissioned by customers, what put Dudley on the contemporary art map locally and beyond was her work with wood. And that story is also a story of discovering one’s passion and of a life transformed by a new calling.

A Late Bloomer
Though she grew up among creative women — one of whom was her grandmother, who was a substantial influence in her life — young Betsy had no idea that she had any talent. Her creative side found an outlet, eventually, in the work she did with her first husband, Bill Atwell, a co-founder of a construction company that also restored historical buildings. Over time, Betsy had three children and for years served the community as a volunteer, often in art-related projects. She has fond memories of designing the coronation gowns for the Order of the Alamo Fiesta pageant and traveling to India to research that year’s chosen theme. In her early 30s, Dudley discovered applique tapestry and decided to give it a try, producing 200 of them in a rickety, non-air-conditioned studio out in the Hill Country. With no schooling in the arts, she admits that “at that point I didn’t know what it didn’t know.”

And then at age 50, she found her true calling. Dudley and her friend, the late Linda Pace, took a sculpture class at the now-defunct San Antonio Art Institute taught by prominent sculptor Bill FitzGibbons. That was it. No more dainty stitchery for her. The two women found themselves molding clay, welding metals, drilling cement and wood. Dudley liked wood. “We had a lot of broken doors, wine crates and wood from fences at the ranch, so I thought, let’s see what I can do with all that wood,” she recalls. What she ended up producing for the next two and a half decades is an impressive body of work that secured her reputation as a serious and talented artist. Sleek and decidedly contemporary, the sculptures are mostly abstract or gently suggestive of familiar shapes, often intricately balanced, oddly eloquent and technically sophisticated.

Not surprisingly, it was FitzGibbons who opened the door of success by suggesting to gallerist Joan Grona to take a look at Dudley’s work. Grona did, giving the new sculptor her first gallery show in what was one of the premier contemporary art spaces in the city. Dudley says she “was humbled” by the experience. “I loved the process of working with the wood and seeing what came out, but I never thought of myself as an artist,” she states. “My soul needed to create, but I wasn’t particularly driven to succeed and be known.” Still, she was “thrilled.”

Many other exhibits followed — at the Southwest Craft Center (now Southwest School of Art), the Blue Star Contemporary Art Center, the Parchman Stremmel Gallery, at the Sculptors’ Dominion Invitational (several times) and other places. Her stunning sculpture, Emerging, greets shoppers in the local Neiman Marcus store, while others stand in a number of churches and health care institutions around San Antonio and in other cities.

A Sense of Fulfillment
When she is asked how sculpture changed her life, Dudley’s face lights up as she admits that it gave her “an incredible sense of fulfillment. When I was in the process (of working on a piece), it was magic. Even if the process itself could be tedious at times, I had a good time anyway. Doing what you love is a way of honoring who you are.” She credits mythologist/writer Joseph Campbell for “giving her permission” to follow her bliss. “If you follow your bliss,” he famously said, “you put yourself on a kind of track that has been there all the while, waiting for you.”

With her last sculpture, Sounds of the Sea, the artist reached a long-sought goal of imparting an undulating quality to the wood, reminiscent of waves or other soft folds. That’s the one that brought her the most joy, she wrote in a catalog of her work. The piece is now in a private collection in Dallas.

Though she can’t sculpt anymore due to spinal problems, tapestry work is almost as satisfying, she notes, and it has something in common with sculpture — it’s very tactile since there are also many pieces to play with in figuring out the design. Now married for 30 years to Brooke Dudley, who is very supportive of her pursuits, the artist turned 80 recently, which prompted her to reflect upon her life and consider how far she has come. While women sculptors are still a minority in the field, attitudes have changed a lot. She tells me how her father reacted when she told him about learning to weld. “He was horrified,” she says. “He said, ‘I did not send you to college to become Rosie the Riveter.’ He couldn’t imagine me working with saws and drills. It’s not very feminine, so maybe that’s why relatively few women do it.”

Her advice to women who feel that it may be too late to start something new is simple: It’s never too late to follow your bliss.