Women in Business: Women in the Automotive Industry

Once Karl Benz strapped an engine to a three-wheeled cart in 1885, the race was on — for cars that are better, faster, safer and more efficient and look smart on the starting line.
That couldn’t suit these four San Antonio women any better. On a daily fast track to help people find the right car among the endless lots, makes and models in this city, they work long, demanding hours in a male-dominated industry.
But like Benz’s wife, Bertha, who borrowed the motorized cart to travel to grandma’s house one day, effectively capturing the public’s imagination, they have a drive to get things done and the will to get there first. 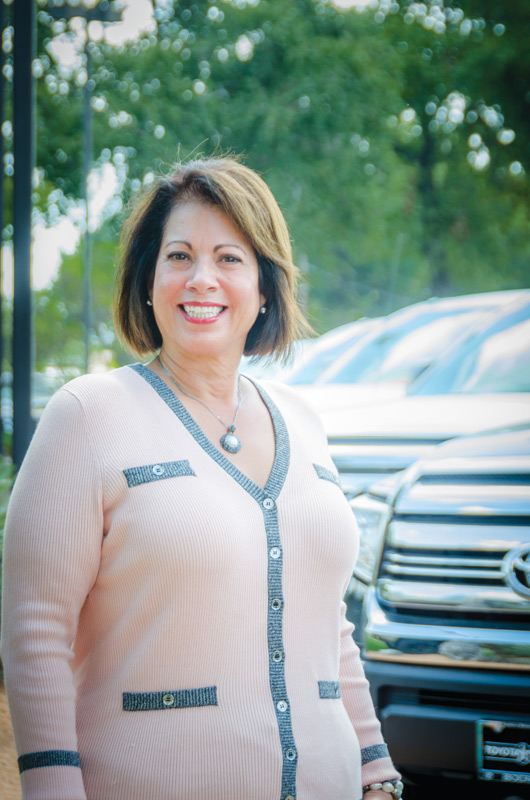 “I never thought I would make my life’s work in the automotive industry,” Carolyn Liotta says. Then a family member invited her to work at his dealership 24 years ago. “And I have never looked back.”

She was hooked from the moment she sold her first car, a pre-owned Honda Civic, for reasons that had little to do with the commission. “I loved selling cars,” she says. “It allowed me to connect with people and build relationships. I mastered the skill of making people feel comfortable with the sales process.”
What didn’t come as easy was learning about the product. In fact, the “old car dogs” made a bet that she wouldn’t last two weeks. “Challenge on!” Liotta says. “As a woman, I had to know my craft better than the guys.”

She sold cars for many years and worked her way up to become a general sales manager of a Toyota dealership.
That can-do attitude came from growing up with four brothers in a suburb just outside of Manhattan. Relocating to San Antonio 10 years ago, today she works as the customer relations manager at Toyota of Boerne, a job that requires her to know “something about everything.”

Liotta is responsible for hiring and training new sales staff and finds success by leaning on everything she’s learned over the years climbing the career ladder.

“The most challenging part of the job is finding balance, which means finding mutually acceptable resolutions when problems arise,” she says. “Safeguarding the dealership’s reputation in the community is very important to me. I want to ensure that all of our guests are treated with integrity and professionalism.”
As for those old car dogs, she says, “I know where I am today — those guys, not so sure!” 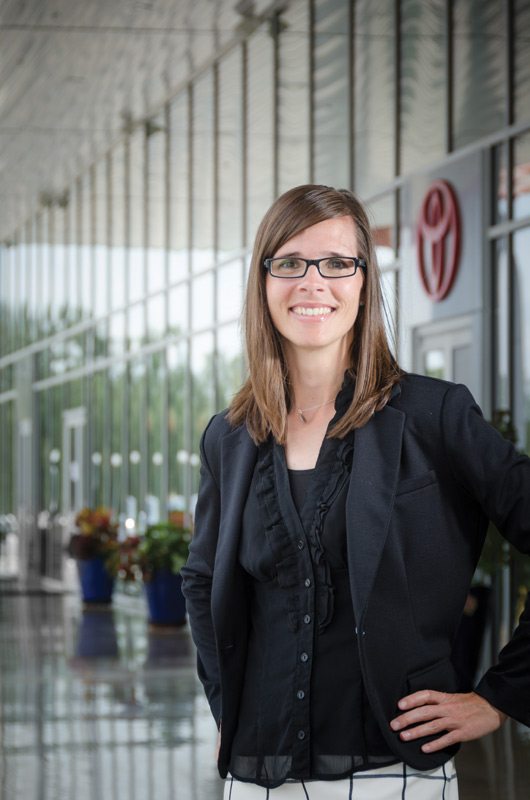 “I love to see an idea become reality and then become a success,” says Brittney Dupaul, a San Antonio native and the youngest of three girls in her family.

After playing Division I soccer for Texas Tech University, Dupaul got her automotive career start 13 years ago as a business development center agent. Though meant to be temporary, the job became a springboard to her present career when she found the industry a perfect match for her personality — fast-paced and competitive.

“I am also the independent type and like the freedom to be creative, test new ideas and make decisions,” Dupaul says. She found that freedom at Red McCombs Toyota, “and I have continued to learn and grow ever since.”

Dupaul describes a typical day as “drinking from a fire hose,” and “running a race,” and for that reason, time management is her greatest challenge. Since learning to delegate, she says, “I have been able to open up a whole level in my career. I now put as much effort and concentration into hiring the team as I do in completing tasks myself.”

It has paid off. She has risen through the ranks to e-commerce and marketing director, a position responsible for the dealership’s advertising, marketing, e-commerce, business development and sales. “It’s everything,” she says. “I get involved anywhere I am asked. I believe that if you work hard and excel, then opportunities will naturally come.”

That doesn’t mean she isn’t ready to compete when the time comes — a trait she developed as a tomboy growing up, playing every sport she could, even if it meant playing with the guys. It made her a better athlete on the field, Dupaul believes, but she doesn’t view her male colleagues as rivals off the field.

“I’ve been fortunate to have found nothing but mutual respect along my career path in this industry,” she says of her co-workers, men and women who have a passion for the product they sell and enjoy working with people. And she loves to innovate in ways that help them be effective.

“There is a difference in thinking something might be a good idea and actually taking an idea and putting it into action,” Dupaul says. “I have the opportunity to do that in my job. And even if every idea is not always successful, there is always something to be learned for the next one.” 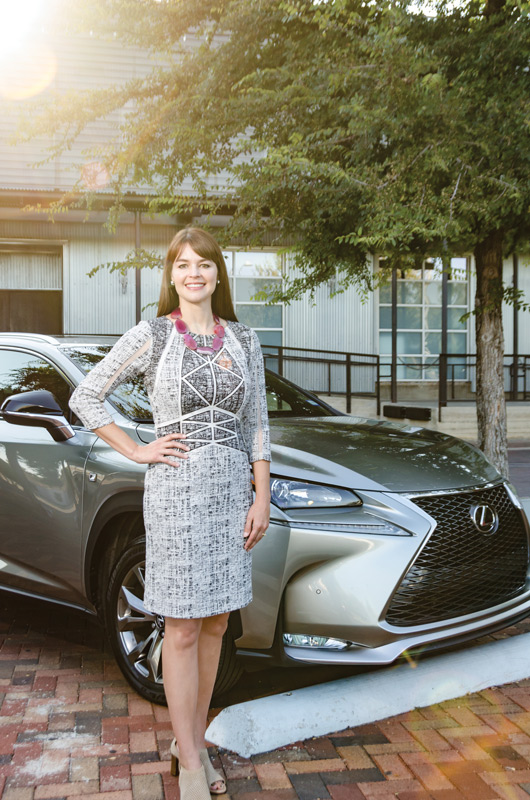 People who know Elizabeth Cox, the marketing director for North Park Lexus of San Antonio, say she’s always happy, smiling and willing to help. It turns out helping others is perhaps as much a part of her DNA as cool cars and road trips.

With a childhood that began in the Ozarks and took her all the way to England and back for college at Penn State, Cox knows a thing or two about cars, basic auto maintenance and navigating the open road.

At 18, she shipped her own car from England to the U.S., picked it up at a port in Washington, D.C., and drove herself to college. “Before I left, I was required to know how to check my oil and change the tires,” Cox says.

But it was her grandfather who inspired a sense of charity in her when he started the first Meals On Wheels program in Michigan in 1973.

Cox is marking her 15th year at the Kahlig Auto Group dealership where she began as a certified sales and leasing consultant. “Lexus wasn’t hiring, but I managed to talk with the new car manager at the time and convinced him to give me a few minutes of his time,” she says. Today, she’s on the marketing side of the business — “the creative innovator” — focused on advertising, community relations and digital marketing.

It may still be a man’s world in the showroom, but Cox knows what she brings to the table. “This is where being a woman has its benefits,” she says. “I know what is important to me when I make purchases, and I believe that women can provide a special service when it comes to consulting, advising and shopping.”
A mother of four, Cox says her family remains her greatest success. They spend time together enjoying frequent vacations driving to places like Colorado, the Blue Ridge Mountains and, recently, Highway 1 along the California coastline.

And being a busy wife and mom helps her relate to customers. “I have helped moms get into a new car because they have a baby on the way, and have helped the same moms get a different vehicle because they are giving that ‘baby’ their car for their 16th birthday,” Cox says. “I just love that.”

More than that, she adds, is the opportunity to be part of the Lexus community that supports the San Antonio area so generously. “I’m honored to be part of it.” 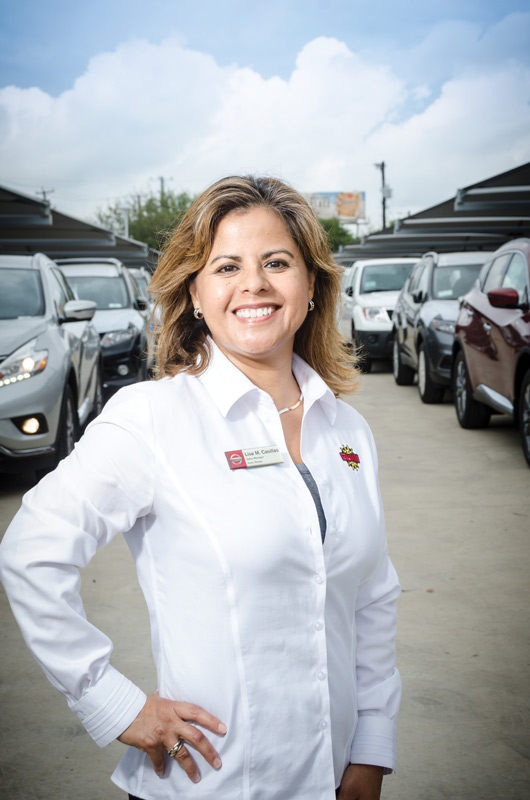 Lisa Casillas has a window on life working in auto sales. “Everyone who comes through the dealership is here because they’re moving toward something or away from something,” she says. “One way or another, I have a chance to play a part in making things better in someone’s life.”

So whether the customer is buying a new car to celebrate a promotion or his family is growing, or because of a divorce or death of a spouse, she knows the car is integral to a change in a person’s life: “Regardless of the circumstances, I have a chance to do what I can to impact people in a personal and positive way.”
It’s that idea that motivates her in an industry where “your best is never good enough,” she says. With manufacturers raising the bar ever higher in an ultra-competitive industry, Casillas finds work-life balance her greatest challenge. “There’s never much time to just rest and breathe and enjoy the fruit of your labor, because if you do that, you’re just going to fall behind,” she says.
As fleet sales manager for the dealership’s new Uber account, her typical day involves spending a lot of one-on-one time with Uber drivers helping them find cars to lease, processing their lease contract and helping them get the proper insurance.

Having worked more than 20 years in auto sales, Casillas doesn’t give much thought to being “one of the guys,” and simply enjoys the chance to observe how they playfully relate to one another.
“I spent a lot of time with my uncles growing up, and they never treated me like I was ‘just a girl,’” Casillas says. “They raised me to believe I could do anything I wanted as long as I didn’t let things make me cry!”

Indeed, women should know that they have a really strong voice in the automotive marketplace, according to Casillas, and there is no need to feel intimidated when shopping for a car. Studies show women play a leading role in 85 percent of car purchases. “That’s huge, and women should feel empowered knowing that they are recognized as a group to be reckoned with,” she emphasizes.