Margie O’Krent describes her life as a love story. She is referring to her 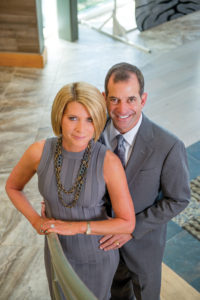 husband, Sam O’Krent, whom she met in high school, married a few years later, and with whom she has weathered life’s joys and sorrows for the past 32 years.

One current source of joy is that they are working together as co-owners of O’Krent’s Abbey Flooring Center, a company that evolved from earlier family businesses going back to Sam’s great-grandfather, who started his first business in 1915. Sam took over in 1990 and is now guiding the enterprise into its second century. Housed in a handsome three-story building on Loop 1604 — designed by Margie’s brother Stephen Kramer — O’Krent seems to offer every imaginable kind of floor covering, from ceramic tiles that look and feel like rustic or polished wood to all sorts of real wood, stone, luxury vinyl tile, cork and a mind-boggling array of carpets.

“Though for most San Antonians our name is associated with carpet, hard surfaces have become much more prevalent,” explains Margie, while giving me a tour of the premises. “The wood look in tile is big; it has a contemporary feel that people like with the added durability for active family lifestyles.” She points out that the store has a “special relationship” with Mannington Mills, a fourth-generation family business like O’Krent’s, known for the quality of its hand-crafted luxury vinyl tile and laminate. Carpet and rug brands they carry include Karastan, Masland, Fabrica and Antrim, in addition to the Wools of New Zealand products that cannot be found anywhere else in San Antonio. In some cases, customers can design their own rugs.

As a CPA by training, Margie serves as vice-president and chief financial officer for the company, though she also supervises human resources, IT, purchasing and advertising. Back in the mid-1990s, O’Krent’s joined a larger entity, the Abbey Carpet franchise group that Margie describes as a networking and buying association. “They provide us with resources, and we can pick and choose which ones to take advantage of. Over 800 stores are involved, which gives us real buying power in the industry,” she notes. It also helps with marketing and merchandising, both of which are especially important when the bulk of your customers are people looking for home décor.

In addition to working with her husband, what she likes best about the job is the chance to improve the lives of their customers and employees, as well as give back to the community beyond their walls. “We often joke that our employees are our kids since we don’t have children,” she says. “We treat them as family, and we also love our San Antonio community that has been so kind to us. Our family built a successful business here. Giving back to our community is very important to us.”

Three Careers
Though she loves it now, Margie admits that working in the family business was never considered an option for her years ago. Following a five-year stint as a CPA with Ernst & Young, the young woman felt unhappy and “stuck. I realized that accounting wasn’t for me. I was good at it, but I really needed a different path in life,” she explains. Yet going into business with her husband didn’t feel right either. She wanted to be independent. Serendipity interfered when she met a friend of her husband who was a flight attendant. Fond of travel, Margie decided to interview for a job with American Airlines and was accepted. To alleviate Sam’s concerns about the lifestyle changes the new job would force upon them, she promised to quit flying if “it didn’t work for either one of us.” But it worked. “It turned out to be one of the best decisions I made in life,” she says, her face lighting up at the memory. What followed was 25 years with the airline, though during the last 10 she barely flew a few times a year. The marriage not only did not suffer, it became stronger. It was like a new honeymoon every time the spouses reunited. 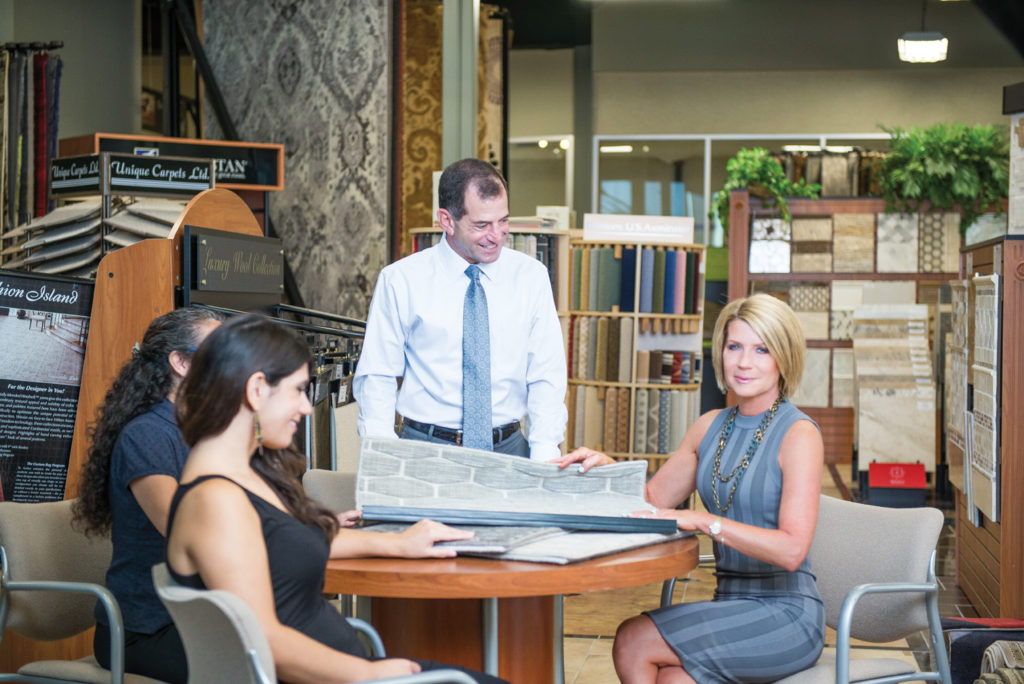 Things changed again in 1997 after Sam’s elders and mentors, his father and grandfather, both died within months of each other, and subsequently an employee was caught embezzling. His wife’s CPA skills were needed in the business. She obliged, yet continued flying, albeit not as frequently. Then something else happened soon afterward that affected both their lives. Only 36, Margie discovered a lump in her breast one day and panicked. Young and athletic, she had a hard time accepting the diagnosis. “It was a surreal moment,” she recalls.

After pondering her options, Margie opted for bilateral mastectomy rather than less drastic solutions because she didn’t want to spend the rest of her life worrying about recurrence. The ordeal took several months, but “we were done with it.” Following reconstructive surgery, her life resumed more or less normally. It was also during this trying time that the love story with Sam deepened. He went with her to every appointment and every test, supporting her all the way. Her eyes mist at the recollection of her husband’s loving support.

The Cancer Returns
Unexpectedly, in 2013 the cancer returned. It was harder to notice at first because of her reconstructive implants, but a series of sophisticated medical tests confirmed the bad news. Both husband and wife were in training for another marathon at the time, and ironically, Margie was feeling strong and healthy. This time the choice treatment was chemo, which made her sick and exhausted for months. She lost her sense of taste and smell, yet one asset she did not lose was her hair. A doctor told her about a device called “cold cap,” which worn during chemo helps prevent hair loss. Once again, Sam was with her throughout the ordeal, her steady source of strength, she says, again moved by the memory. Then wanting to lighten up the moment, she quips: “A friend told us that taking care of a cancer patient is a team sport — and we are definitely a team.”

Today, she is on maintenance therapy and in remission. Exercise, which helped with recovery, continues to be a big part of her life, as is her volunteer work, mostly with health-related causes. Remarkably, O’Krent’s was the first small business in San Antonio to install and train staff in the use of automated external defibrillators (in cases of cardiac arrest), and the couple also organize the Arthur O’Krent Golf Classic that has raised over $1 million for the local chapter of the American Heart Association. Margie currently serves on the board of governors for the Cancer Research and Therapy Center, supports the Susan G. Komen Foundation and rolls out an 8-foot pink carpet for the Race for the Cure. In addition, she serves on the board of directors of the South Texas Blood and Tissue Center Foundation, where she and Sam will be the recipients of this year’s Red & White Gala chairman’s award in October. In 2011, the San Antonio Business Journal honored her with its Women’s Leadership Award in volunteer leadership.

Encountering cancer not once but twice changes a person’s perspective on life, and it was no different for Margie. It’s a “monumental” experience that for a while wipes everything else off your personal radar, yet you eventually return to ordinary life and start taking care of ordinary things but with heightened appreciation. In that context, she quotes something her mother used to say about closeness in marriage: “You always need to keep talking about the little things. The big things will be taken care of, but if you don’t share the little things, you are going to grow apart.” These days, Margie is happy to deal with the “little things” in life.