A graduate of St. Mary’s Law School, Sean McNelis is the founder/owner of McNelis & Associates, a firm that specializes in construction/real estate law in relation to commercial and public projects. He has recently represented prominent construction companies such as Guido Brothers and Kopplow Construction in high-visibility projects, including the DoSeum, a Witte Museum addition and the ongoing Botanical Garden expansion.

His entire legal career has been in this field, starting with a couple of associate positions in construction litigation at two different firms, followed by six years as shareholder and team leader for Matthews and Branscomb’s construction law division. He is a member of multiple professional associations and a leader in both legal and various other philanthropic, art, biomedical and alumni organizations. The San Antonio Business Journal listed McNelis as one of the “40 Rising Business Leaders under 40” in 2004/2005 and Texas Monthly recognized him as both a “Texas Rising Star” and a “Super Lawyer” multiple times, including in 2015 and 2016.

In 2014, the attorney decided to venture into the retail field by opening Sporting District, a specialty men’s store at the Pearl, cleverly named after a former local red-light district by the same name. The handsomely appointed shop offers “provisions for manly pursuits through a curated selection of distinctive clothing, accessories and lifestyle merchandise befitting the tough, rogue and refined sides of the modern gent.” 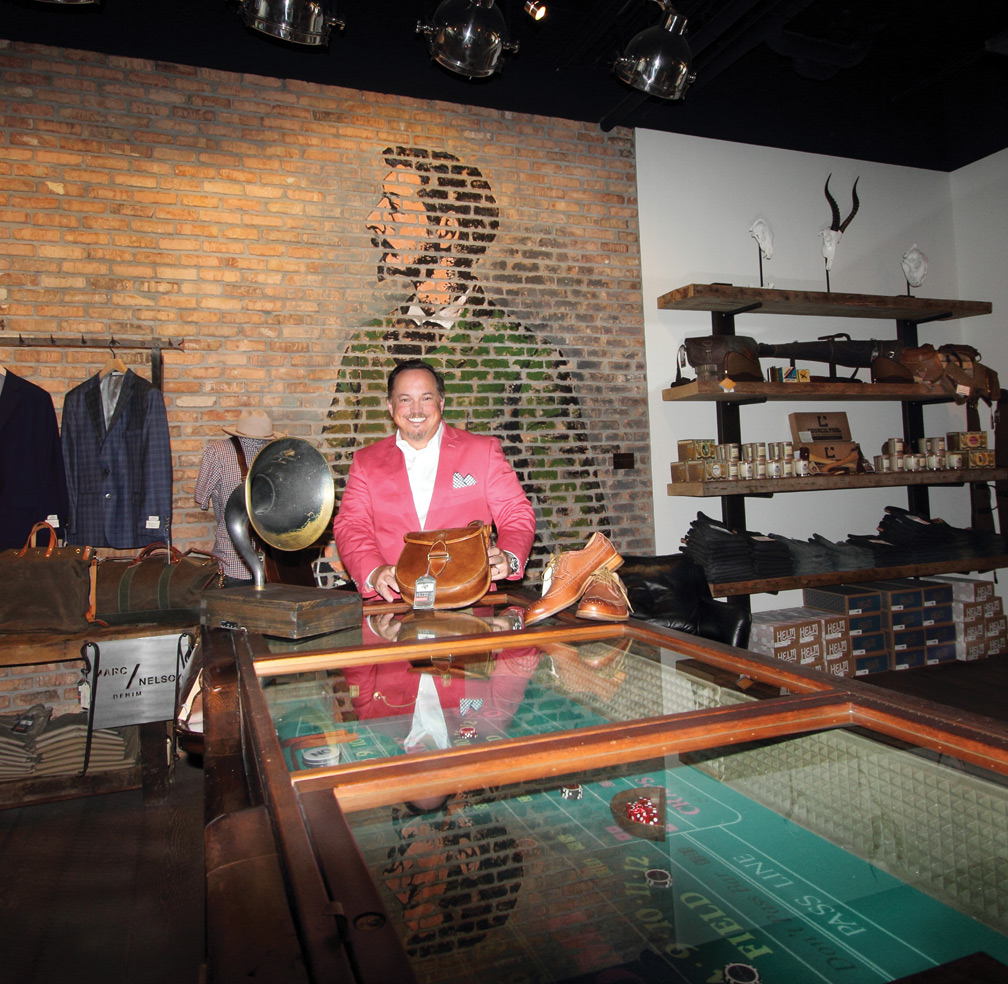 What prompted you to open the shop?
Out of the blue I got a call from the Pearl one day telling me that somebody had told them that I was interested in opening a men’s store and that they had reserved a spot for such a store in the complex. I told them they were nuts. I never intended to open a store. I hung up, but I started thinking about it and became fascinated with the idea. San Antonio needs a good men’s store to elevate its game… Within two weeks I called the Pearl people back, and six months later we were opened.

Was the space ready for you?
Oh, no! it was dirt floors and no walls. It became fun (to create our space). The floor you see here consists of 140-year-old wood boards from the old Joske’s department store downtown. As a lawyer, I had a client who had renovated the old Joske’s building, and I had heard that they had this great lumber over there, so I decided to buy it and put it in my store. This lumber came in oxcarts from Louisiana in the 1880s. I’ll tell you another cool thing. Steves & Sons was the lumberyard in San Antonio that purchased and brought the lumber originally. They painted the company’s name on some of the boards, and we have a few of the painted pieces here. And what makes it even cooler is that Marshall Steves was a partner of mine in my old law practice.

How did you choose your merchandise?
Frankly, I like cool stuff, and I knew what San Antonio was lacking. So, I decided that’s the niche we should fill. Everything in our store is Southern-made, essentially the best of the South, from Raleigh Denim from North Carolina, the best denim in the world, to Hamilton shirts from Houston, run by the fourth generation of Hamilton shirt makers. Everything in our store has a story to tell. There’s actually a person behind the product, and we know him. I was familiar with some of these brands, then I searched out the others. Right here behind your shoulder is a pair of jeans dyed in whiskey barrels from (the craft denim brand) Marc Nelson Denim in Knoxville. Nobody else sells whiskey-stained denim in San Antonio! I wanted to open a store that San Antonio could be proud of and that could hold its own against Austin, Dallas or even Los Angeles or New York… We were named one of the five best men’s stores in the South by Garden & Gun Magazine and the Conde Nast Traveler mentioned us as well. We are getting a lot of national attention, in part, because there’s a resurgence of interest in Southern culture and way of life… Also, we not only find these makers, we collaborate with them to develop new private-label products exclusively for us.

How involved are you personally in the management of the store?
Daily. I try to visit the store four to five times a week. When we first opened, I used to work in the store one or two days a month to get a feel for what the customers were looking for. I wish I could do more of that. It’s fun. Practicing law may be exciting but it’s not creative. Owning a store allows you to be very creative.

Let’s talk a bit about your law practice. What are the main challenges in figuring out a contract for, say, something like the Botanical Garden expansion?
There are a number of issues, but probably the most important one is the fair apportioning of liability between the partners. If you are working on a project that must be completed by a particular date, what happens if it’s not finished on time? It’s not fair to pass all the risk on to the general contractor, whose profit margins are comparatively low. Thus the parties have to agree in advance on risk allocation. If it’s a public-private project, that adds another layer of complexity. It’s three-dimensional chess! It may not be creative, but it’s intellectually challenging. You have to know where all the pieces fit together on a 3-D project.

It must be satisfying for you to see the finished results and know that you were instrumental in the development of a project.
I love seeing things get built. The nice thing about construction is that you can see the results that make San Antonio a better place to live. I love pointing out to my children that I had a role in that. I may not have hammered a single nail, but I created the documents that made it happen.

Recently, you returned from a safari in Africa. Tell us about that.
I went to Tanzania for a three-week classic, tented E. African safari, just nature and a few of us. We hunted Cape buffalo and sable. It is said that the buffalos look at you as if you owe them money, and they are very aggressive and dangerous. That’s the fun part. It’s all fair chase though. This is spotting and stalking hunting, so you are trailing the animal and may end up walking for six hours a day. That’s the kind of hunting I enjoy most. I like raw nature, that experience of man against the elements. It recharges my batteries. When I come back from a hunt, I feel like I have rediscovered my place in the world and am ready to start again. You know, our store’s tagline is “Provisions for Manly Pursuits.” Unfortunately, a lot of aspects of manhood have been diminished over the years. Hunting is one way to preserve some of that.

Can you describe the Dallas Safari Club you were inspired to form here?
In my spare time – of which I have none – I’ve just formed the San Antonio chapter of the Dallas Safari Club. Over 50 people came to the meeting. Our group promotes conservation of wild life habitat, anti-poaching initiatives and pro-hunting initiatives, the latter involving teaching the next generation hunting skills and gun-ownership responsibility. We hunt only post-reproductive males.