A Savory Destination of Distinction Shaped by a Family’s Love 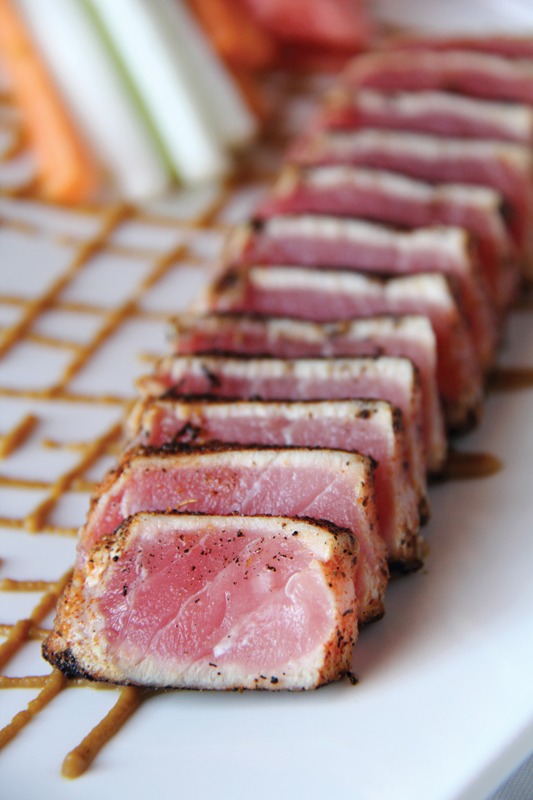 In 2011, Myron “Bill” Been and his wife, Jo Anna, opened the sleek and contemporary Myron’s Prime Steakhouse in the shiny Alon Town Centre.  With many exciting features such as an extensive bar (service begins at 3:30 p.m.), outside dining, wine-pairing and spirit-pairing dinners — both created monthly by chef Jared Heilman — it is a culinary treasure of elegance, comfort, and sublime specialties.  Having received many recent awards of distinction, it has quickly become a savory destination on the San Antonio dining map. 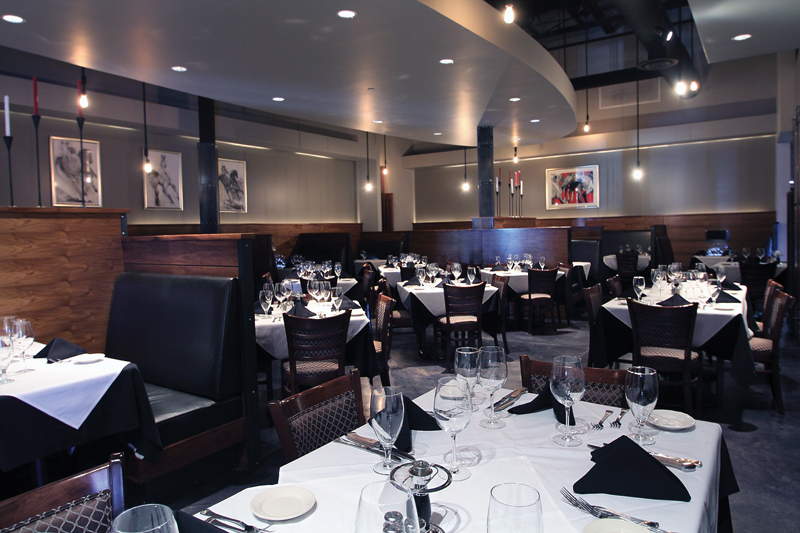 Been knows steak and has for decades.  Before opening the original and very successful Myron’s Prime Steakhouse in New Braunfels in 2003, Been’s goal was always to build a long-standing family business centered on warm hospitality and high-end beef.  He realized early on how critical a team approach with his wife would be. Thankfully, his native San Antonio bride was willing, and together, they sought to gain valuable experience in order to prepare themselves.  Been explains, “I first spent many years managing the renowned Old San Francisco Steakhouse in Dallas and then opened and managed the one in San Antonio.  Meanwhile, Jo Anna honed her skills, but on the finance side of the restaurant.”  Other restaurant management opportunities followed, and eventually they realized their dreams.

Reflecting on how their journey began, Been says, “It all happened when I dined at an upscale steakhouse in Dallas during my pre-med studies at Texas Tech in the ‘70s. I was so transformed by the experience,” he exclaims, “I returned to Lubbock and promptly changed my major to business and haven’t veered off the steak path since.  Now, daughter Jenny and her husband, Steve Franckowiak, work with us; she is the administrator for the entire operation, and he is the general manager of the New Braunfels location. Our success is in this family,” attests Been.

After a bit of research, it is apparent how stringent Myron’s standards are in serving the highest-quality beef available — Chicago USDA Prime beef, inspected as the most tender  and  flavorful beef with the finest texture.  The higher fat marbling ratio combined with the lower beef maturity constitute a Prime grading.  The aging process follows,  and Myron’s ensures their beef is dry-aged for a minimum of 14 days and then is wet-aged between 28 and 35 days.  I ordered the 8-ounce filet topped with their signature “Shrimp Myron” (plump shrimp with white wine and garlic butter sauce) draped over the top.  Each blissful, buttery bite melted into the next.  The bone-in rib-eye landed on the table next to us, and it was such a sight, I made a mental note to come even hungrier next time in order to try this 22-ounce Prime rib-eye, a carnivore’s delight. 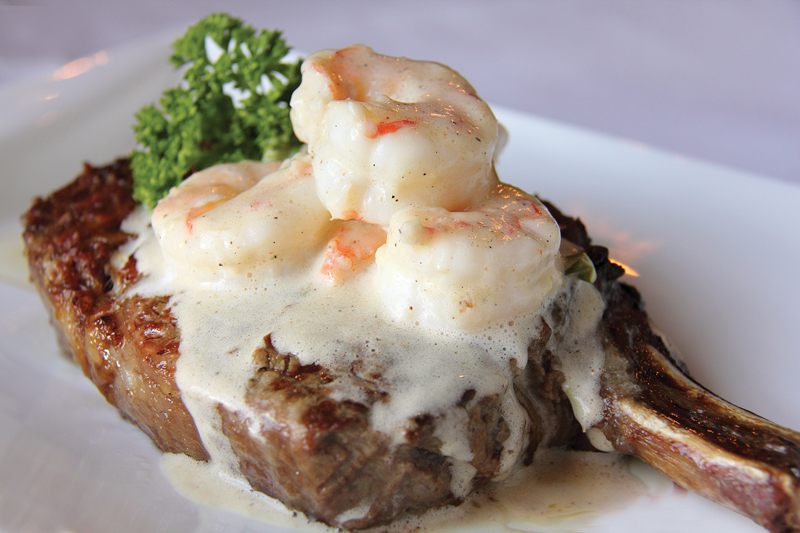 While pork is not graded in the same way as beef in the United States, Myron’s manages to source the best pork I have ever tasted at a steakhouse — I know this because I sawed off a juicy morsel from my husband’s plate.  Curious, I asked Been to elaborate on their perfectly executed pork, and he boasted, “It doesn’t even come with a sauce, per se, because we are confident it is so moist and delicious it just doesn’t need it.”  His pork theory reminds me of Texas barbecue enthusiasts who feel it is blasphemous to slather sauce on their prized meat.  I have come around in my thinking since moving to the Lone Star State and now can fully appreciate Been’s passion behind serving two 8-ounce, 1-inch-thick single bone-in pork chops piled up high and sauceless.  The glistening pork stands alone at Myron’s, but any of their delicious house-made sauces are available — with no scorn.

Coming from a long line of steak connoisseurs, I also find genuine pleasure in appreciating the sides — an art form for sure.  There are many noteworthy sides at Myron’s, but the most popular is probably the jalapeño mac and cheese.  I marveled at the creamy, cheesy sauce with tangy notes from the sharp aged cheddar, but the delayed pulse of jalapeño heat after every spoonful is why I suspect the fans are endeared.  There are other cheesy delights at Myron’s like the au gratin broccoli, au gratin potatoes, au gratin cauliflower and the au gratin spinach, leading me to believe they take their “au gratin” formula very seriously — pure decadence. 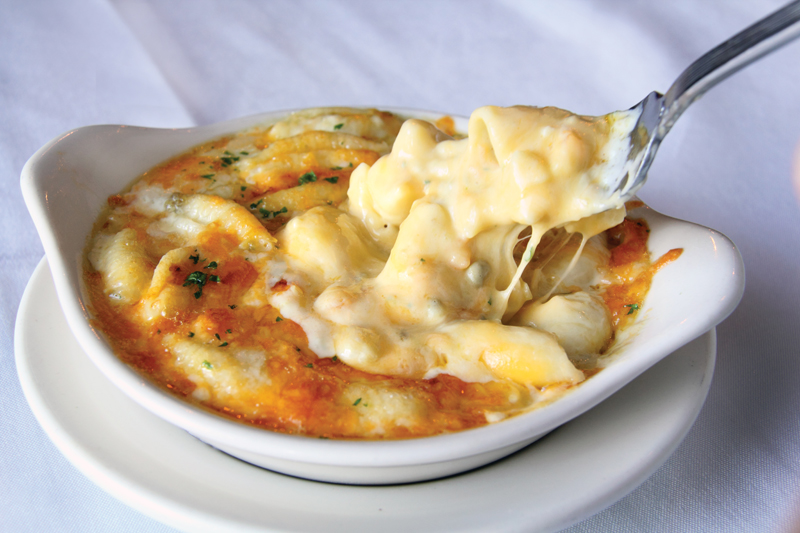 There is something special for everyone at Myron’s Prime Steakhouse, including live Maine lobster, king crab legs, the daily “fresh catch,” rack of lamb and other celebrated appetizer and entree fare from the earth, sky and sea. But what’s a memorable steakhouse experience without finishing with a lavish dessert — or two?  The classic chocolate cake was superior, arriving warm with rich chocolate ganache sauce dripping every which way. The classic bread pudding was exquisite, ushering me to happy nostalgia of the finest bread puddings while growing up in Louisiana. Other desserts caught our eye as well, but we were just too full. 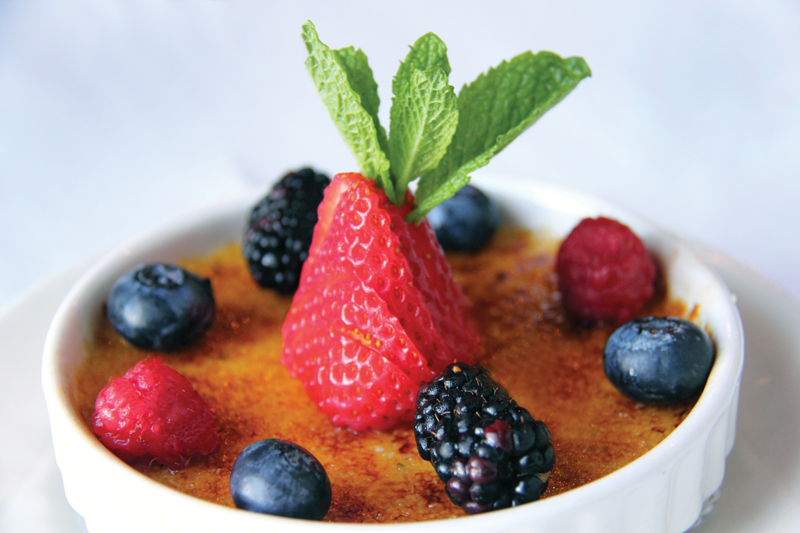 In addition to a glorious menu and attentive service, Myron’s also offers three private rooms ranging from an intimate gathering of 12 to a larger meeting room for up to 60 seats, all outfitted with AV capabilities.

Overall, after this spectacular meal and personable conversation with Bill Been, it is clear why Myron’s Prime Steakhouse in the Alon Town Centre is a compelling restaurant for all occasions. Been summarizes it best, saying, “Above all, it is the love of family that shines through and sets us apart.”  And so it is.