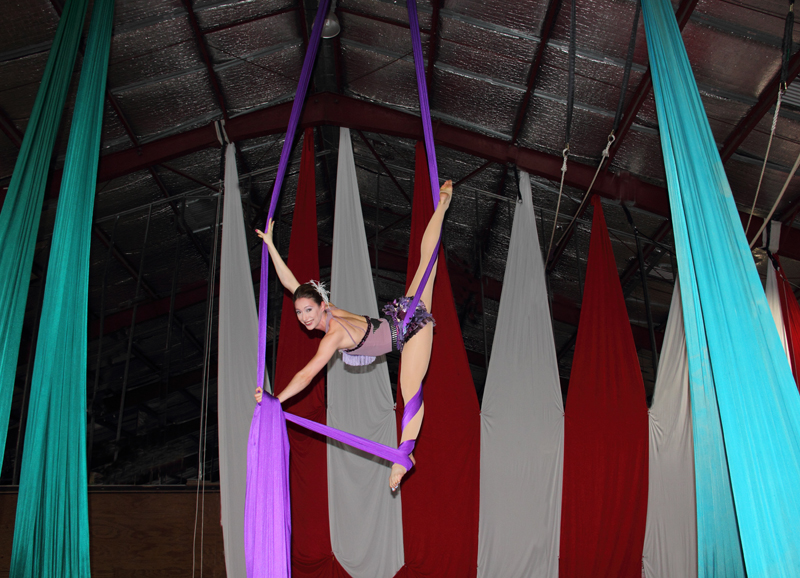 Visitors to SeaWorld San Antonio may remember Julia Langenberg as the girl who danced on and around a hoop suspended above a whale pool. Or maybe they saw her with parrots flying around her while she engaged in an aerial ballet, supported only by silk panels hanging from a top rig.

“It was like being in a dream, quite surreal,” recalls Langenberg, who did six shows a day six days a week for three years.

Today, Langenberg is the founder and artistic director of Aerial Horizon, a performing company that has dazzled audiences at the Alamodome, the McNay Art Museum, the Luminaria annual fest, the zoo, the convention center, the Guadalupe Cultural Arts Center and at many corporate events. The group has also presented a few shows at its own former space in the Blue Star Arts Complex.

It can be said that Langenberg has singlehandedly introduced aerial dance to San Antonio. Since there were hardly any other aerialists in town, she started teaching aspiring high flyers while still with SeaWorld because she “wanted to have buddies.” Then, upon leaving the marine park in 2012, the Austin native decided to stay here to build an aerialist hub. “I felt there was a need. I felt obligated to my students, and I wanted to contribute positively to the San Antonio arts scene,” explains the slim brunette, who had studied both ballet and modern dance prior to choosing aerial art. “Now we have this amazing school, with 100 students a week.”

At first sight, aerial dancing may remind you of circus acts, but it’s more akin to what the Cirque du Soleil does than the traditional circus. The best known form of the art is done with the help of silk panels attached to a ceiling rig that the artist uses to lift herself up, wrap herself in, and then execute a graceful acrobatic performance, punctuated by sudden body inversions and dramatic drops that invariably make the audience gasp. Langenberg choreographs her routines to express a theme, while basing her mind-boggling moves on fabric theory (knowledge of how the fabric can sustain certain positions). She has also brought to town colleagues who specialize in other disciplines of aerial art that use different apparatuses/devices, such as a lyra (hoop), moon (a heavy metal crescent) and halo (a double hoop.)

What she loves about dancing in the air is the sheer challenge of it. “I am attracted to extremes, and this art is all about how far you can push your body,” she notes. “You have to be extremely focused, and that excites me.”  She trains three to four hours a day to maintain the strength needed to do what she does. Being high in the air also gives her a sense of freedom that “feels completely natural.”

A couple of years ago, Langenberg received an Artist Foundation of San Antonio grant to develop an original theatrical show, which premiered in 2014 under the title of Echo.  Featuring multiple artists and devices, with original music by Jaime Ramirez, the work was designed around the theme implied in the title. The most attentive viewers probably detected echoes of all kinds — in the music, in the movements and in costuming. “The idea was to show how we echo each other and how our actions reverberate through other people’s lives,” explains the artistic director. The more casual audience members, however, might have missed some of those reverberating bits, but the show was engrossing nevertheless due to the artists’ astounding physical prowess and intensity. One theme they “echoed” very powerfully was the dedication to their difficult craft.

It so happened that Echo was seen by Roberto Prestigiacomo, producing artistic director of AtticRep theater company,  now one of the resident groups at the Tobin Center of the Performing Arts. He was impressed. “She has brought something new to San Antonio,” said the director, who has long been interested in multidisciplinary productions. “It’s unique here, though I see it in Europe all the time. It’s really great that she is here.” Always on the lookout for potential collaborators, Prestigiacomo approached Langenberg to suggest working together. The piece he developed, 14, is premiering June 9-19 at the Tobin’s Roger Alvarez Theater. Dedicated to young people like his daughter, who were born in the uncertain post-9/11 world, the work draws inspiration from classical myths of heroes who leave home to explore the unknown, encounter obstacles and wise men, and finally return home to share what they learned with their community. The hero in 14 is Maia, a 14-year-old, whose stage journey will be told through a combination of spoken word, contemporary dance and aerial art. From the description of scenes I was allowed to see, it sounds like an adventure on which audiences will definitely want to accompany Maia.

For Langenberg, who is choreographing the aerial parts, this is the first collaboration with an  established, real theater company. Her aerialists will actually be portraying characters, mythological and stylized as they may be. “I thrive on creating new material, and to do it in a new context is really exciting,” she says.

Dancing on Buildings; Waving with Whales

Growing up in Austin, young Julia took ballet lessons and eventually trained in several dance disciplines with Ballet Austin from 1989 to 2002 while also pursuing other training opportunities. She always knew she wanted to live life as a freelance artist, but in college she turned from dance to music by getting a degree in vocal performance from St. Olaf College.  Dance ultimately won the day, however. After working as a modern dancer for a few years, in 2006, she auditioned for Blue Lapis Light, a site-specific aerial troupe that, according to its website, “seeks to transform urban environments into inspired works of art.” Langenberg puts it this way: “I auditioned, got in and started dancing on buildings.”

Just like that! Photos of the dancers hanging off the sides of various edifices, sometime 75 feet above ground, floating on or around various architectural elements, take your breath away. Yes, they are attached to and supported by harnesses, but still! It looks beautiful but dangerous. “I didn’t even know that such a thing (aerial dance) existed when I was in school. Then it became my passion,” says the now seasoned aerialist. She had no fear of falling because she took the time to learn all there was to know about the equipment that made her work possible. Though now she and fellow company members hover only 5 to 15 feet above the stage, the equipment remains extremely important since keeping dancers and students safe is her top priority.

The challenges at SeaWorld were of a different kind. Falling into water may not be so bad, yet she was “terrified” of diving into it as one routine required. Getting used to her “partners,” the whales and dolphins, was also a new experience. “I became friends with the Beluga whales,” she recalls, smiling. “They had their own personalities, like dogs. At the end of the show we would wave together. You build a relationship with these animals. It was sad to part with them.”

To further refine her airborne skills, the artist took classes at the New England Center for Circus Arts, where she mastered additional disciplines, such as trapeze, halo, acrobatics, Chinese pole and others. Today, her confidence is at an all-time high as she is competing in the U.S. Aerial Championship in New York City. She is one of the finalists who will compete for the top title May 13-15 at the Rose Nagelberg Theater. The competition shows will be live-streamed, so you can watch them, too (usaerial.org).

The national and international exposure for the finalists, not to mention the category winners, will be huge. But Langenberg promises to stay in San Antonio no matter what happens: “The exposure will help us bring more artists to San Antonio to show San Antonio and America what contemporary circus can be.”