San Antonio Home: Hilltop Home with a Colorful Past

Melinda and Rob Rodriguez are a hard-working couple unafraid of adventure. They love traveling in the Far East, serving San Antonio in challenging leadership positions and living in an aerie on a mountaintop in Leon Springs.

The property has a colorful history. It is located on the west side of Interstate 10, across the highway from Rudy’s Country Store & Bar-B-Q. Early in the 1960s, members of the Leon Springs Presbyterian Church erected a 35-foot cross with a 14-foot cross member. Lights were hung on it, and church members built a road for worshippers’ use. At night, or in foggy weather, the cross seemed to be suspended from the sky with a string. On Easter Sunday, churchgoers would climb the hill to the cross for Easter sunrise services.

But the church didn’t own the property. In the 1980s, Iranian Shah and international businessman Fadhlalla Haeri was traveling on Interstate 10 and saw the hilltop. He thought it would be an excellent location for his family compound, so he purchased the property and removed the cross.

He occupied the main house at the top of the hill and added separate buildings for his three wives, a pavilion for gatherings and a school for young children.* The main house had a guard tower because the Shah was very concerned for his safety.  However, it wasn’t assassins that forced his departure. Business investments went sour and it appeared he was in debt to the IRS for millions of dollars. The Shah abandoned the property, and it was eventually sold. 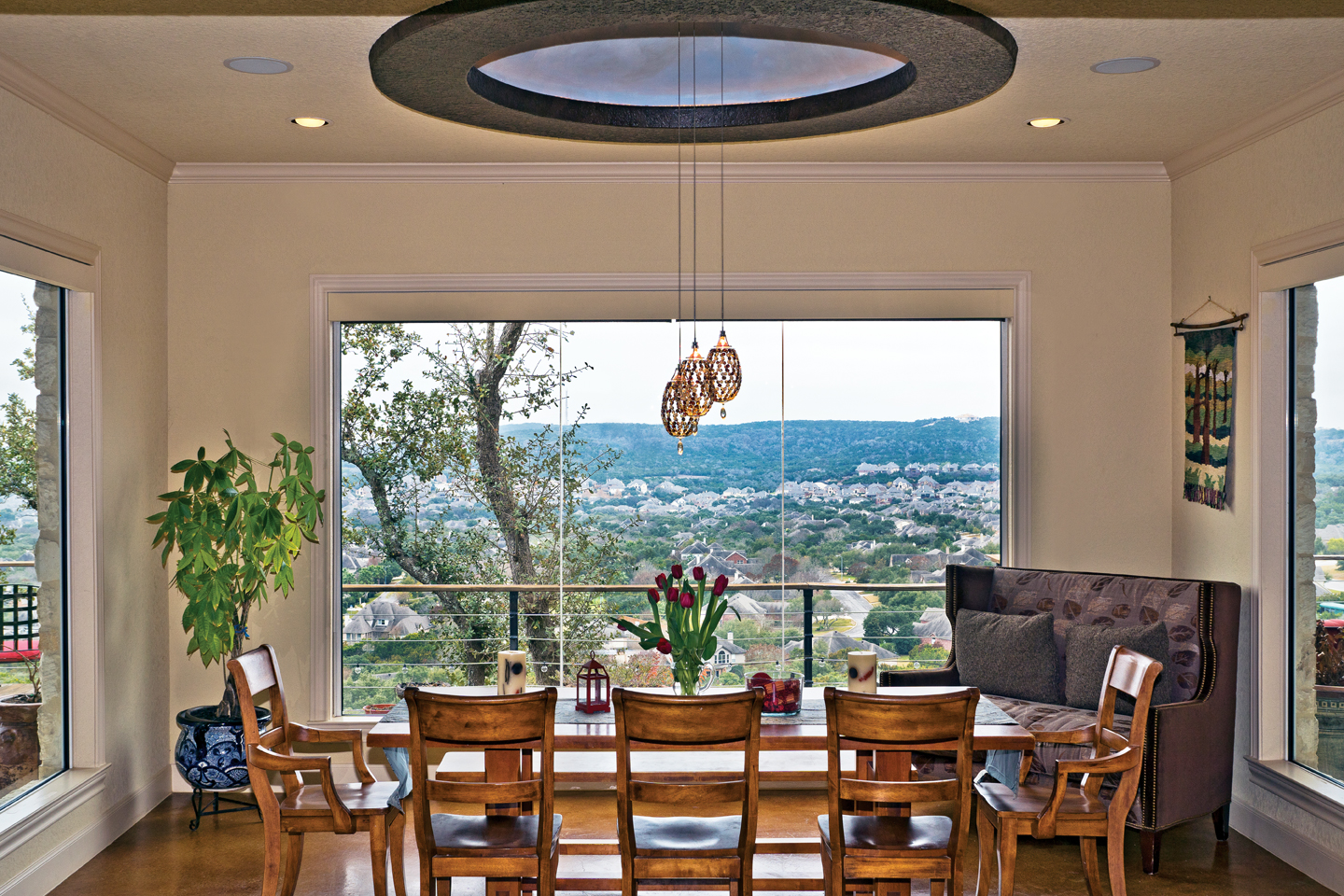 Eventually the property was acquired by Dr. Horacio Pena, a friend of Melinda’s. He was ready to sell in April 2005 and asked Melinda if she and Rob would be interested in buying it.

Melinda drove out to visit. What she saw was the original house.  “It was a box with lots of stairs,” she said. “It was not at all energy-efficient and not particularly attractive. I knew it would take a lot of work to make it really livable.” But the house spoke to her. “I’m a native Filipino,” she says. “In summers, we always left the heat of the city for the cooler temperatures of the mountaintops. This place reminded me so much of where I grew up.”

In spite of her initial attraction to the house, Melinda declined the offer. Six months later, Dr. Pena asked again if Melinda would like to purchase the house. “This time, we said yes,” she recalls. “We sold our house quickly — I thought that was a good sign — and moved here in December.”

The Rodriguezes own the top three acres of the hill. When they moved in, several of the original dwellings were still standing. “One of the houses was a prayer house and school for the Shah’s children,” explains Melinda. “ There were small homes across the hill for his other wives and mistresses. A helipad was here, too.”

The main way to the top of the hill is through a locked gate, via a very narrow, bumpy dirt road. The road winds around the hill to the top, and parking is scarce. It’s easy to see why the Shah felt safe here;  no one got in without permission. The panoramic view is spectacular.

The Rodriguezes painted and patched the old house for five years: “We knew things would have to be repaired, but we thought we could manage. Even when we had to dig a 900-foot well, we took it in stride. But when a storm took the roof off, that was it. We knew it was time to make a big change.”

“It took us a year to create a floor plan,” Melinda says. “We chose Mattern & FitzGerald Custom Homes as our builder.” One of the first challenges they faced was getting the big demolition equipment up to the construction site. “There was no way they could come up the narrow main road,” Melinda remembers. “I had to ask a neighbor on the slope below me if the trucks could go through her property and up a back road to reach us.”

The new 6,425-square-foot design is larger than the original house. “We wanted views on all four sides,” Melinda says. “We wanted a functional design for our family and for entertaining.“ 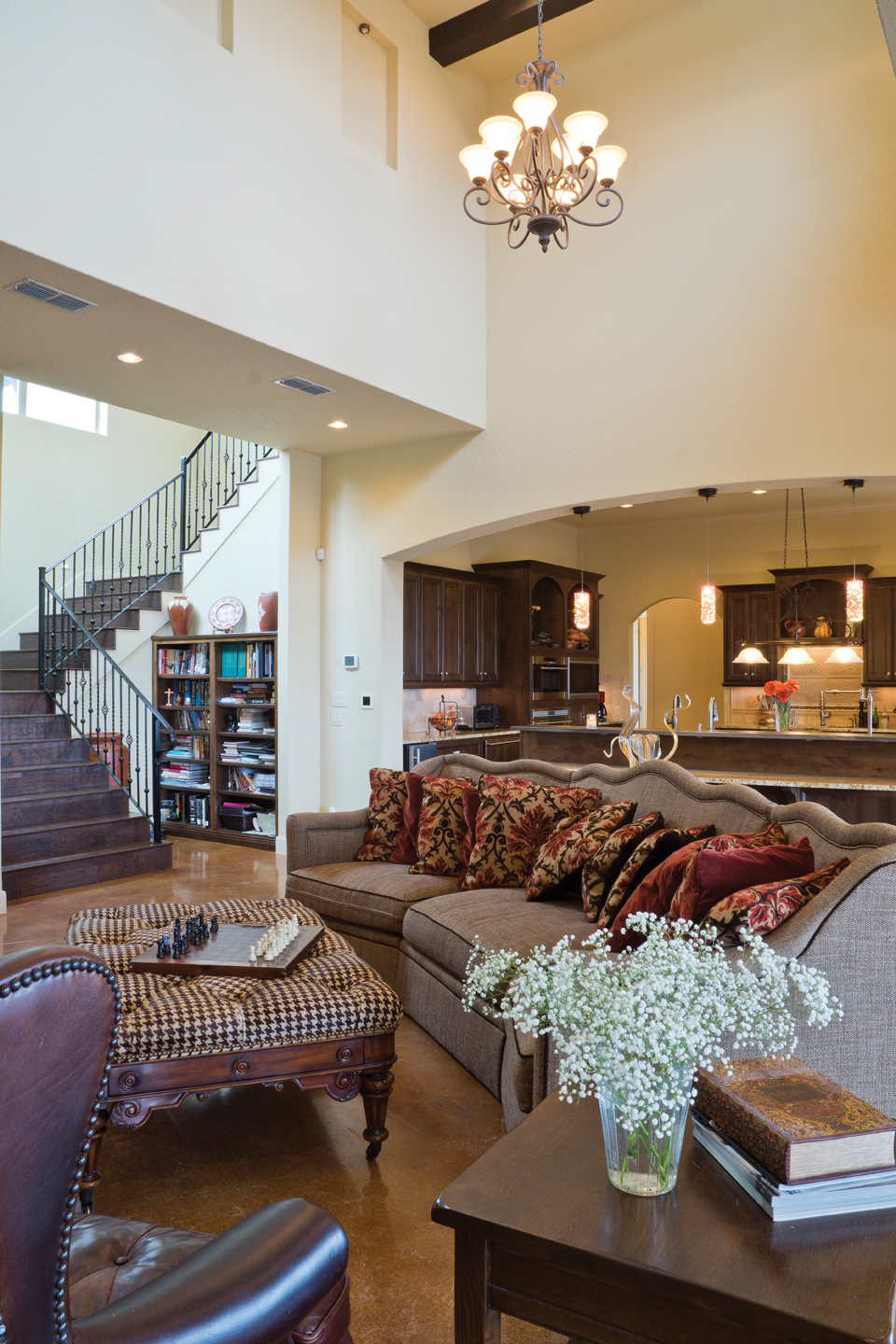 Melinda says half the house is the kitchen, and in a way, she’s right. The great room encompasses a huge kitchen, breakfast nook, living and dining area. The adjacent deck has an outdoor kitchen.

“We like the open design for the flow,” Melinda says. “When Rob starts cooking, it’s like watching someone on The Food Network. He’s very entertaining, and our guests like to stand around the island to watch him work.”

He’s got a great space to work in. The large island is equipped with a Wolf propane cooktop and disposal sink. There is a traditional sink set in the cabinetry behind the island and a farmhouse sink in the eat-in bar on the opposite side of the kitchen, overlooking the living room.

“We have every appliance you need,” Melinda exclaims, indicating the icemaker, warming drawer, steamer, traditional oven and microwave. The cabinets all offer pull-outs, and many are built to hold Rob’s spice collection. Ceiling-height cabinetry displays Melinda’s china and glassware.

A stunning southern vista entertains anyone sitting at the dining table.  While the view is marvelous, the dome above the table adds elegance to the ambience. “We wanted to look up and see the stars while we ate, but of course, we couldn’t make that work with our design,” Melinda says. “So an artist painted the sky in the dome. I didn’t want a fancy chandelier to interfere with the views, so we hung three Swarovski pendant lights from the center point.”

The master suite is built on two floors. The master bath is on the main level and overlooks the negative-edge pool and spa. Arched windows above the tub overlook land belonging to George Strait. His and hers vanities are at opposite sides of the room.

The shower is one of Melinda’s favorite things in the house. “It has a rain shower head and four jets that are positioned for short Filipinos,”  she laughs. A rectangular window allows natural light to stream in over the bather and filter through the heavy glass door.

Across the hall from the master bath is the Asian room. “It was supposed to be the master bedroom, but I wanted to sleep higher up in the house,” she says. This space serves as a sitting room, populated by a large-screen television and comfy wicker sofas.

Rob’s office is tucked into the Asian room. The pocket room features a coffered ceiling and built-in cabinets displaying his collection of miniature militia. A flight of stairs leads to the master bedroom. “When we designed this room, the architect insisted that we include a small bathroom,” Melinda recalls. “She said we wouldn’t want to go downstairs in the dark late at night to use the restroom — and she was right.”  Instead of a traditional toilet, they installed a bidet, a small, much-appreciated luxury. A pedestal sink completes the setup.

A glass door opens onto the balcony. On the right is a small guest suite and a steep flight of stairs. “This part of the house was once the guard tower,” Melinda says. “We kept the tower idea and disposed of the guards.”

At the top of the stairs is a square patio covered in Astroturf. The patio offers a 360-degree view of San Antonio, the Rim and the foothills of the Hill Country. “There is always a breeze up here,” Melinda says. “It’s a great place to watch fireworks on the Fourth of July. Sometimes we bring our sleeping bags up here and camp out with the kids.”

The Rodriguez children have their own wing, with three bedrooms, two bathrooms and a sunny play room. They have a private patio balcony, big enough for a small party with friends. “The sunset is beautiful from this balcony,” Melinda says. “I’m not sure the kids enjoy it, but I do love the peace I find up here.” 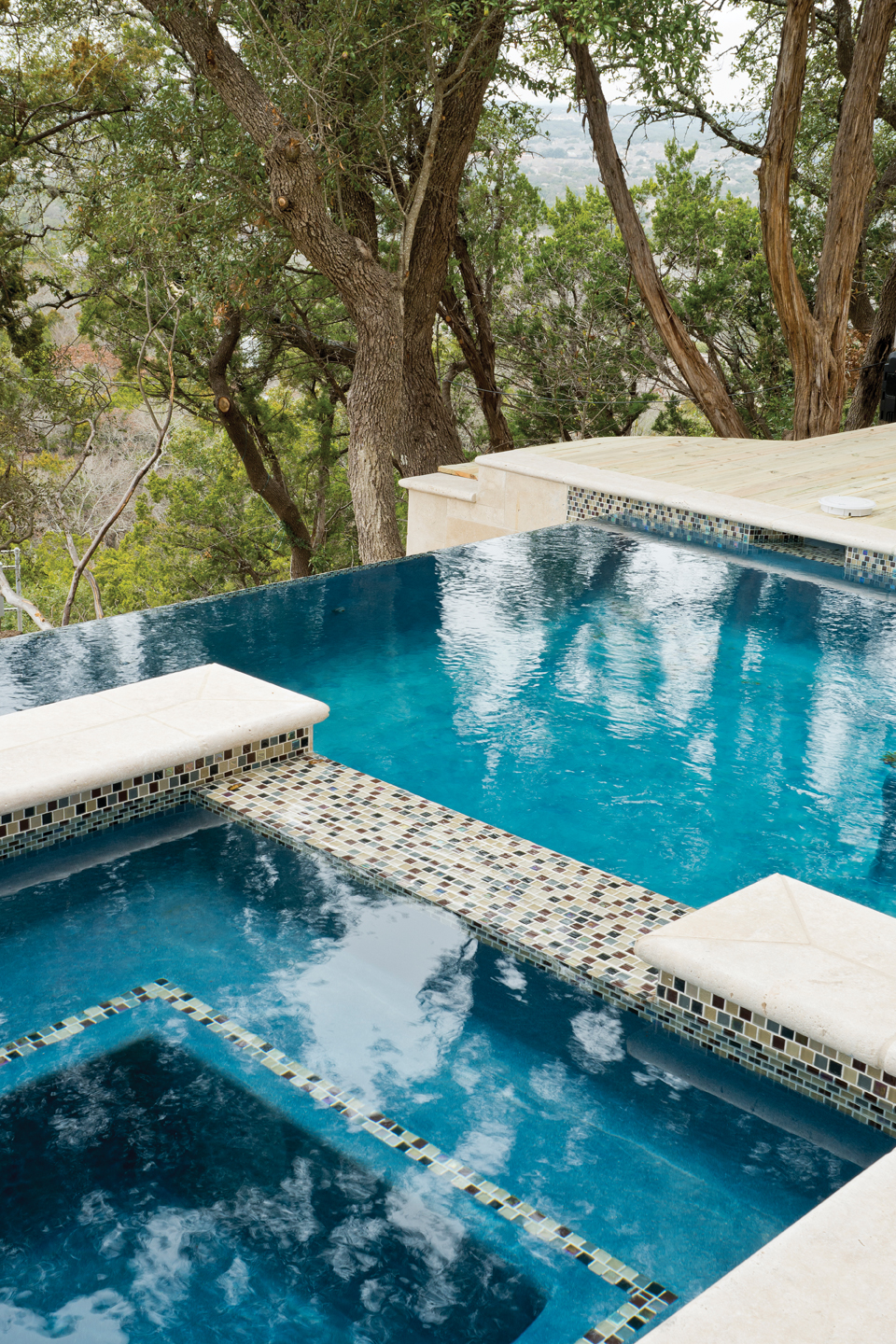 Melinda says one of the best things about the house is its abundance of storage space. “We have attic space over the kids’ rooms and over the garage,” she says. “There’s a huge pantry and a big utility room, as well as an extra guest room. We have a three-car garage, which we’ve converted into an exercise room, a home theater and an office. For once in my life, I do not lack for storage space!”

Melinda and Rob are thinking about a new project — resurrecting the cross that once stood on their property. “Long-time residents tell us it was a beautiful thing and how much they miss it. If we do rebuild it, I’m sure the construction will be another adventure,” she says.