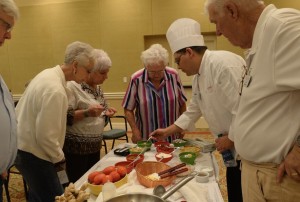 Residents of Morningside Ministries at Menger Springs were in for a treat as Celebrity Chef Bal Arneson of the Cooking Channel paid a visit to the senior living community on March 29. The delicious aroma of Indian dishes filled the room as Arneson delighted residents with a live cooking demonstration and an engaging presentation on the benefits of using natural spices in the kitchen, such as turmeric, ginger and paprika.

Guests were greeted with a delicious, gluten-free lentil cookie with almonds and chocolate chips, which Arneson later revealed to also contain a small amount of turmeric, a natural spice that is well-known in India and associated with a multitude of health benefits. After the cooking demo and presentation, residents were invited to taste Bal’s No Butter Chicken with sides of brown basmati rice and seasoned broccoli.

Arneson’s visit was part of the Compass Group’s Celebrity Chef Series, a program that features the culinary talents and expertise of chefs within Compass Group as well as recognized celebrity chefs who have partnered with the organization. Chefs travel around the United States to share their talents and insight with others, including seniors living in retirement communities. 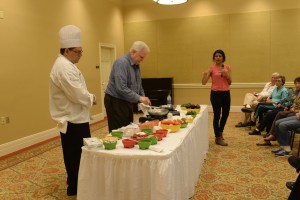 Arneson, who is also known as the “Spice Goddess” as a result of her successful TV show, estimates she has visited more than 60 senior communities and says she enjoys speaking with residents. Since Indian cooking is her specialty, she understands not everybody may be inclined to try it at first, but encourages residents to keep an open mind and learn more about the food.

“When people have more knowledge, then they will try it,” she said. “This is something that I tell my chefs and my kitchen team at Morrison’s. I am working with them very closely to educate my team so they can have a conversation… to give that knowledge. I’ve never met a resident who frowned upon that – the more information you give them the more open they are, so it’s very exciting.”

Scott Almy, Food Service Director at Menger Springs, echoed Arneson’s sentiments and hopes her visit will encourage residents to try flavorful cuisine they are not accustomed to.

“What we do is trying to enrich the lives of people every day,” he shared. “For seniors, we do that with food. And so we can do theme nights, and by bringing in celebrity chefs we’re bringing the culture and the authenticity of the cuisine in.” 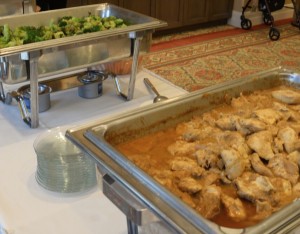 Menger Springs resident John White said he enjoyed the presentation because it reminded him of the days he would eat authentic Indian food on a regular basis.

“I was in Saudi (Arabia) for a while, and we had Indian food about three or four times a week. I developed a good taste for it, it was fantastic,” White said.

For those who have not tried Indian food or natural spices, Arneson encourages everyone to keep an open mind. “Try a little bit, and if you don’t like it you don’t have to try the whole thing,” she said.

About Chef Bal Arneson
Chef Bal Arneson is the host of the Cooking Channel’s and Food Network Canada’s programs, “Spice Goddess” and “Spice of Life,” and is internationally known for her trademark spice-infused cooking. In addition to her work as a TV food personality, Chef Bal is a published author with three bestselling cookbooks: Everyday Indian, Bal’s Quick and Healthy Indian and Bal’s Spice Kitchen.