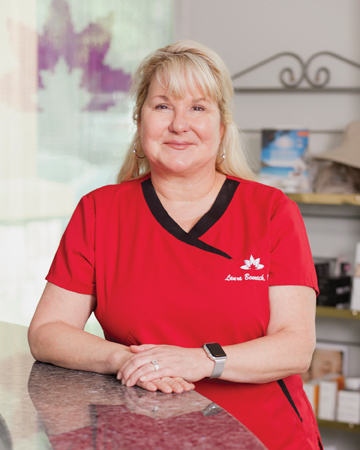 Radiance Med Spa, like its moniker, feels like a tranquil getaway. Lighted mosaic installations decorate the lobby and clinic areas. The entire decor is one of soft lighting, comfortable chairs and fuzzy blankets.  Radiance feels less like a medical facility and more like a place for pampering. It seems as if Dr. Laura Bennack thought of everything when she considered the interior design of her practice. She focuses on instilling her patients with confidence.  Once housed on Broadway in Alamo Heights, Radiance Medical Spa now makes its home in Castle Hills. The move allowed for an expanded  practice and more comfortable spaces for patients to receive and recover from treatment.

Dr. Bennack is a highly educated physician and businesswoman.  She received her B.S. from Trinity and began her professional career as a CPA.  She learned early on that she didn’t love accounting work and decided to try her hand as a tax attorney. She earned her J.D. from St. Mary’s University and went on to practice tax law.  The field was dominated by men in those days, so it was difficult for female attorneys. Finally, she left the law to go to medical school at the University of Texas Health Science Center and started her medical career as an emergency room doctor.

Dr. Bennack began to research the medical spa industry in 2004. By 2006, she bought into the Radiance franchise. At first, she was unhappy with the franchise’s business model, which didn’t require that the business owners be physicians.  In her opinion, this model wasn’t sustainable, but rather than walk away, she worked to change things. Many of the Radiance Spas in the franchise did not survive, but the ones that did were, like hers, the ones with physician-owners.

Dr. Bennack is committed to lifelong learning and training both for herself and her staff. She goes to as many conferences as she can, not only to see the cutting-edge technologies constantly coming down the pike, but also to understand the field. Conferences attract doctors from all over the world, some of them using products or doing procedures not yet approved by the FDA.  She uses this to her advantage. “I get to hear about what is going on in the industry five years before a procedure or product is approved in the U.S. This allows me to learn about it, train with it and get good at it before ever offering it to my patients,” she explains.

Reflecting on the growth she’s seen in the med spa industry since she started, Dr. Bennack says,  “It used to be that you could have registered nurses and injectors that could do their work without a doctor on site.  That isn’t true anymore.  A physician now has to see or approve anything that is done to the patient.”  She welcomes the increased attention on licensing and regulation.  She encourages prospective patients to do their own research: “You must go into a spa and see for yourself who you are going to be working with.  You want to know the credentials of the doctors and the nurse injectors, and you want to know how much experience they have.”

Dr. Bennack also recognizes the changing demographics of medical spa patients.  Mothers are coming in with their daughters. Women in their 20s, seeking preventive care, are starting skin care regimens and procedures earlier than ever.  “It is not because they seek perfection,” she says.  “It is because they want to be educated on how to take care of and maintain youthful-looking skin.”  In addition to seeing more young people in her practice, she has also seen more men taking advantage of aesthetic procedures.  “In the last 10 years, I would say we have seen a huge growth in our male clientele. About 30 percent of our patients are men.”