“Puffer fish,” said our waiter, Kyle—“but not the toxic kind,” he hastened to add. 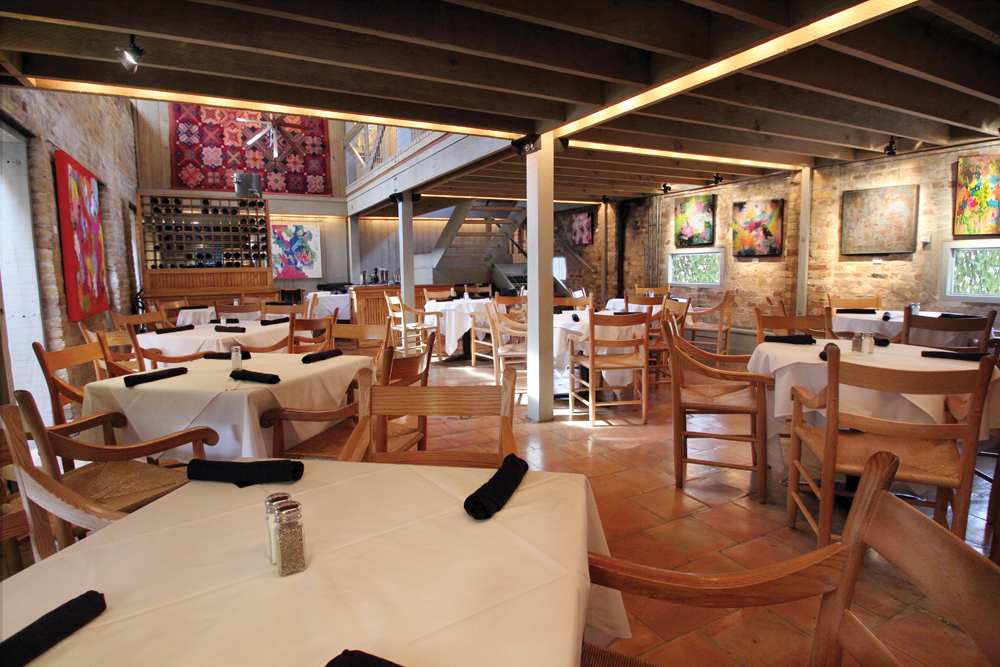 Kyle was referring to the special appetizer of the day at Cappy’s, newly risen from the ashes of a disastrous fire that had closed the popular ’09 restaurant since mid-June.  Such a rebirth might have served as an excuse for a total retooling of the menu as well, but regulars can breathe easy; old favorites such as the Heights Burger and Mustang Chicken still prevail. Specials such as the puffer fish are where chef Gabriel Ibarra can play with his food. 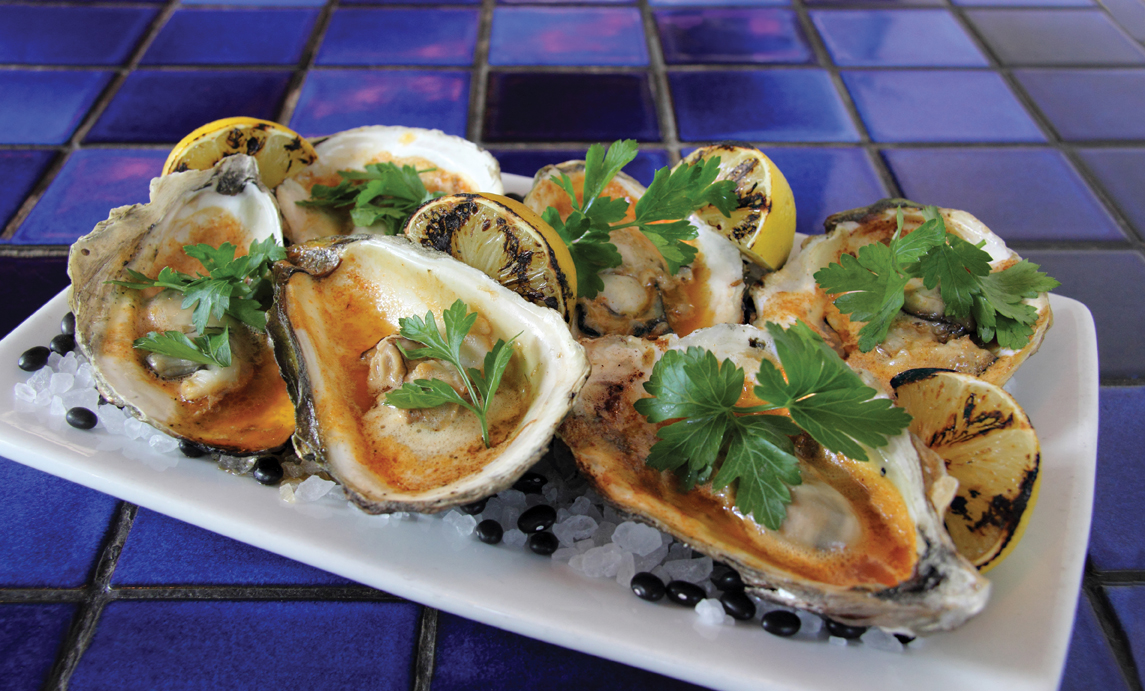 Three chubby tails, battered and fried, were served in the order. “There are bones,” said Kyle in another note of caution. But the bones were nothing more than a small spine, and it was easy to strip the flesh from either side. We also stripped off most of the accompanying sweet/sour/spicy glaze that coated the fish; it was good in its own right but for some might seem too much for such delicate flesh. A five-pepper jelly tops the ramekin of old-favorite chicken and duck liver paté; be sure you dip way down through the flavorful jelly to get a bit of the creamy and robust blend in each bite. And delight in the fact that the “toast points” mentioned on the menu are really far more appealing slices of buttery, grilled ciabatta.

Long-time regulars at Cappy’s might be able to detect subtle differences in the renewed interior; to the rest of us, it seems that nothing has changed: Warm, friendly and accented by colorful art, the place seems not to have changed at all. In this welcoming environment, the char-grilled oysters seem perfectly at home. An herbed garlic butter is their only adornment, and it’s all that’s needed to ease the half-dozen mollusks down. Oh—that and a glass of wine from the well-curated and fairly priced list. 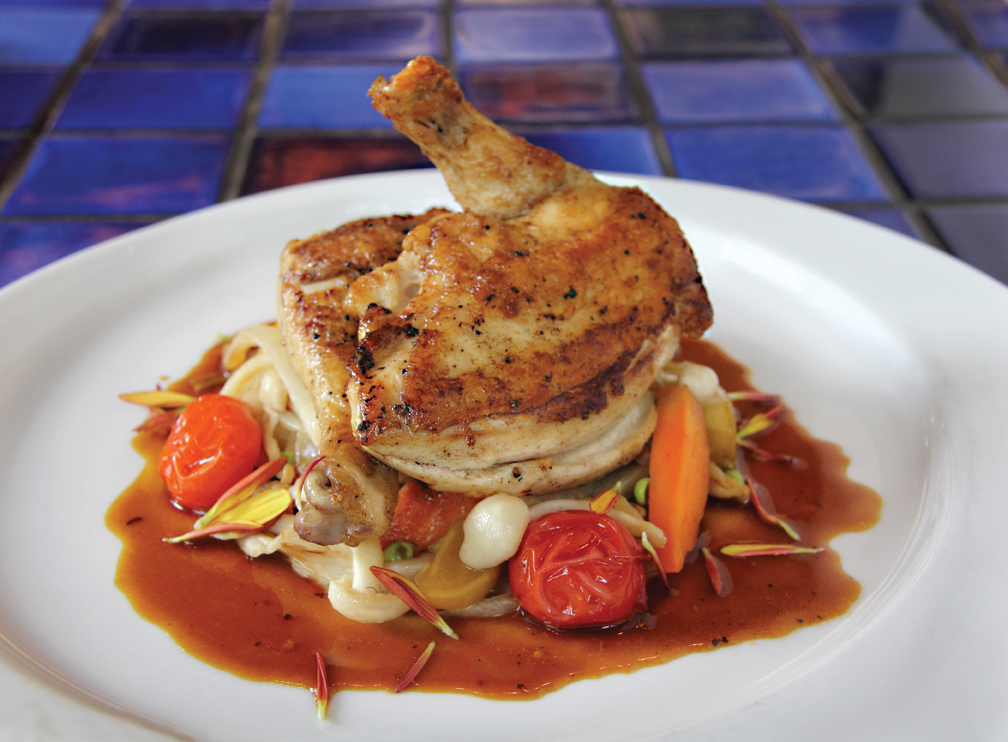 We did pick our 2011 St. Chinian to go with the entrees, but the pretty syrah/mourvedre blend was light enough to play reasonably well with the oysters. It was unequivocally beautiful with the rack of lamb with minted pea risotto and a lamb demi-glace. Crusty and perfectly medium-rare, the lamb was triumphant. Robust flavors also distinguished the pale green risotto, a notoriously difficult dish to do in a restaurant setting no matter what its tint. We found this one a touch too sticky, but did appreciate an accompanying vegetable array that included vibrantly colorful okra and green beans. It all made for a visually impressive plate that was also generous to a fault; much of this went home to be savored again another day.

There’s not much effort expended in making the presentation of the pan-roasted chicken fancier than it needs to be for such a comforting dish. Some cherry tomatoes and chunks of carrot provide a pop of color, but that’s it. Bursts of flavor also come from a couple of kinds of mushrooms and what appeared to be sliced and roasted fennel bulb. But the moist and perfect chicken is, as it should be, the star of the show here. The exotic-sounding diver scallops with seared foie gras, mofongo mashers and spicy mango coulis had tempted during the selection process, but there are times when simple seems altogether appropriate. This was one of those times.

We had admittedly also been tempted by the coconut cream pie and the warm chocolate cake with vanilla bean ice cream at evening’s end. But cooler heads prevailed, and we settled instead on a shared vanilla bean crème brulée.  As was the chicken, this dessert was just what it needed to be: crackling sugar capping velvety interior, all accented with impeccably fresh raspberries. Those of an exotic coffee bent will find many to accompany—or serve as—dessert. There are also ports, sherries and liqueurs in abundance.  Sit back in one of the meticulously refurbished chairs and enjoy your finalé of choice. 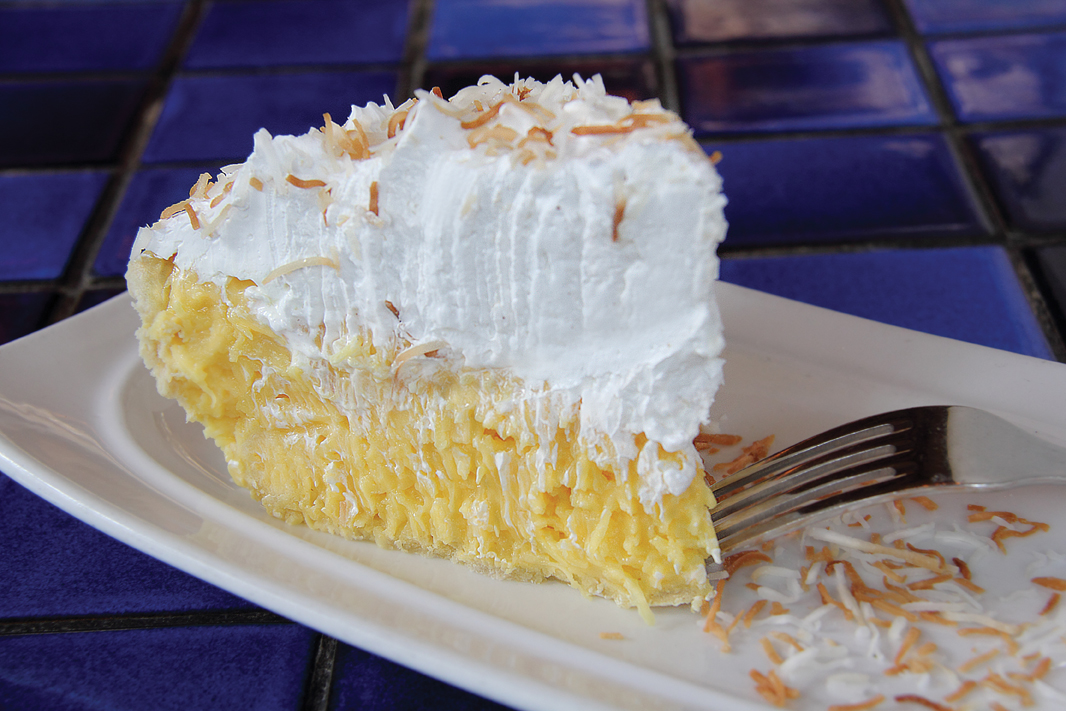 And if you haven’t yet had enough of the puffer fish phenomenon, here’s something I found on an FDA site:

The Food and Drug Administration (FDA) is advising consumers only to eat puffer fish (also known as fugu, bok, blowfish, globefish, swellfish, balloonfish, or sea squab) from two known safe sources. The safe sources are 1) imported puffer fish that have been processed and prepared by specially trained and certified fish cutters in the city of Shimonoseki, Japan, and 2) puffer fish caught in the mid-Atlantic coastal waters of the United States, typically between Virginia and New York. Puffer fish from all other sources potentially contain deadly toxins and therefore are not considered safe.

We’re assuming the mid-Atlantic source for those on Cappy’s menu, but would be secretly pleased to presume the whiff of danger that accompanies “specially trained” cutting in Japan.