A Joy and a Responsibility 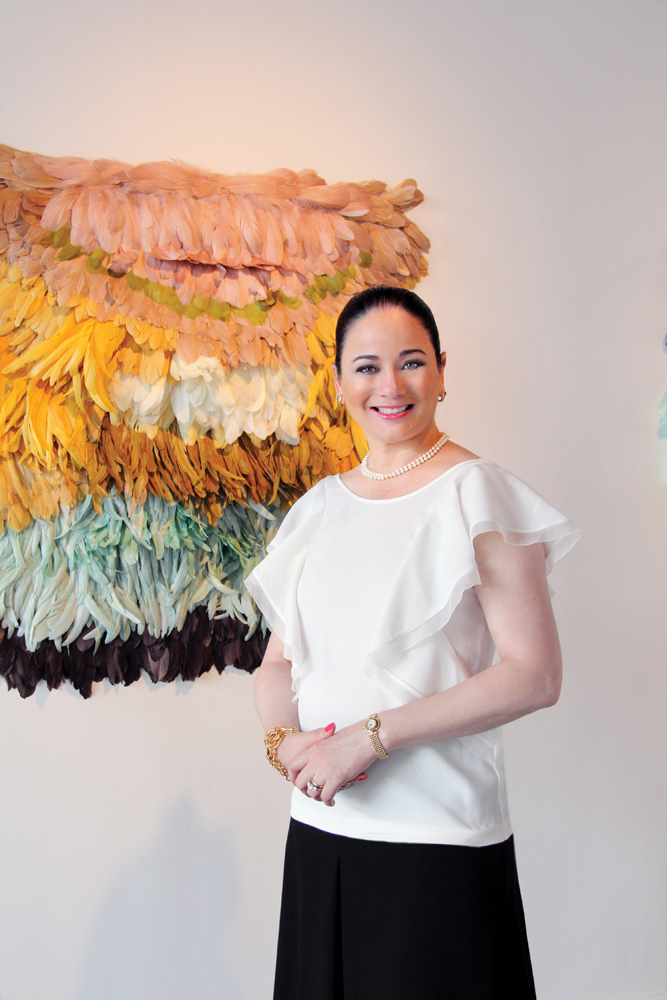 Patricia Ruiz-Healy did not develop an interest in art until she traveled to England at 18 to spend a year studying English.

“My first significant aesthetic experience happened in London,” says the San Antonio gallerist and art dealer. “I was on scholarship and lived with a nice family. As I started going to museums, I absolutely fell in love with art. Since I had always loved history, after my year in England I returned home to Mexico and became a student of art history.”

Today, her Ruiz-Healy Art is a highly respected dealership and exhibition space that specializes in post-war and contemporary art in a variety of media, from painting and sculpture to photography and works on paper. When I arrive at the gallery on East Olmos Drive, she greets me warmly and gives me a short tour of the premises. The exhibit on view features Peruvian artist Cecilia Paredes, who creates “photo performances” that amuse and intrigue the eye while commenting on the relationship between the individual and her environment. To convey this concept visually, the artist paints intricate patterns on her body that correspond to patterns on her chosen backgrounds, then photographs her painted body against these backgrounds in ways that make the two almost blend together.

“I first saw her work at the ArteAmericas fair in Miami in 2007, and it literally stopped me in my tracks,” explains the gallery owner as we settle down to talk in her office in the back of the gallery proper. “I met her in person the same day, and we got along really well. By the end of the fair we agreed to start working together.” Paredes soon developed a following in San Antonio and gained admirers in high places. Both the San Antonio Museum of Art and UTSA bought examples of her work for their collections.

Paredes is only one of a number of Latin Americans who have been introduced to Texan and American audiences by Ruiz-Healy Art, which started in 2004 by dealing primarily in Latin American art. It has since expanded to include San Antonio and area artists, such as Ethel Shipton, Connie Lowe, Nate Cassie, Ricky Armendariz, Jesse Amado, Julie Speed and a few others. In addition to Paredes, the Latin American contingent includes Cecilia Biagini and Nicolas Leiva from Argentina, Andres Ferrandis, originally from Spain, and three from Mexico – Benjamin Dominguez, Graciela Inturbide and Pedro Diego Alvarado, the grandson of famed muralist Diego Rivera. All are internationally recognized names. Beyond this roster of regulars, prominent guest artists have also shown their work here. And exhibit openings are regularly reviewed by local, state and even national art media.

“You have to be passionate to be in the gallery business,” notes Ruiz-Healy. “For me, it’s a dream job. I like being the conduit that helps an artist’s work find a home in a museum or private collection. I like introducing talented artists to the world. It’s a joy and a responsibility. It’s an exciting industry, and there’s a glamorous side to it – travel, meeting interesting people — but business can be inconsistent, and you have to have savings to survive the slow times.”

As the owner and director of Ruiz-Healy Art, it is her prerogative to decide whom to represent. This selection process is informed by her knowledge and experience, of course, but ultimately depends on her response to the artwork itself. “I have to love the concept behind the work, and the technical execution has to be top quality,” she notes somewhat hesitantly as if she had never really analyzed her method. “It also has to bring a different aesthetic, something that we don’t already have among the artists we work with. My personal relationship with the artist is also important. I like to work with friends.”

The Legacy of Chuck Ramirez

One such friend was Chuck Ramirez, the conceptual photographer who died in a bicycle accident in 2010. As the exclusive representative of his artistic estate, Ruiz-Healy has been instrumental in getting the city and the San Antonio Airport authorities to restore and relocate a series of Ramirez’s photographic light boxes, originally installed in the parking garage. On Sept. 14, a group of about 25 people and city officials gathered at the airport to officially unveil the restored artworks, collectively titled Suitcase Portraits. They now greet visitors as they exit Terminal B, “at San Antonio’s front door,” as Felix Padron, the director of the Department for Culture & Creative Development, said at the event.

For Ruiz-Healy it was something she felt she owed to Ramirez. Another project close to her heart is the planned 2017 retrospective of her friend’s oeuvre at the McNay Museum, which will travel to other cities, and she also continues to place his pieces in museums around the country. Handling the estate “takes a lot of my time, but I love doing it. I put everything else aside,” she admits.

From Ranch Kid to

Ruiz-Healy spent her childhood on her father’s ranch in the Sonora region of Mexico, the youngest of eight children. The ups and down of agricultural life in a dry landscape prepared her for the ups and downs of her current business, she says half-jokingly.  The family later moved to San Luis Rio Colorado on the border with the U.S., giving young Patricia her first opportunity to visit Arizona and California. Following the aforementioned year in England, she studied art history in Mexico City for a while until she met and married Juan Ruiz-Healy, a prominent TV newscaster who swept her off her feet. It was love at first sight, says the gallerist, love that has lasted for 32 years and produced two daughters, now grown. The couple soon moved to Miami and a few years later to San Antonio where they had family connections. Juan switched to working for a Mexico City newspaper, and the family experienced  “kind of a mobile situation” that split their lives between the two cities.

Once here, Patricia resumed her studies and eventually earned a master’s degree in art history from UTSA. (She is currently close to completing her Ph.D. at UT Austin.)  Her first studio-gallery was in a house in a residential neighborhood, which restricted the new business’ modus operandi. Openings were “by invitation,” and potential buyers had to make appointments to view her stock. To market her business, she took part in established art fairs in Miami, New York and other cities, built a network of contacts and used the Internet. Word-of-mouth spread, and the business grew “organically.”

Almost a decade later, Ruiz-Healy decided to make the leap to a public gallery when the Olmos Park space became available in 2013. “It has been a very positive experience,” she says. “Now the artists get reviewed, and the public gets to see their work.”

For the holiday season, she has invited guest curator Octavio Avendano Trujillo, a Mexico City-based art critic and curator, to put together a group show titled Why Is the Sky Blue. “I am excited to be collaborating with a younger curator, who brings a fresh outlook to creating something a little different for the gallery,” she notes. “I try to invite one or two guest curators a year. It’s important for my artists to have their work seen by other curators.”

The gallery also allowed her to spread her wings through collaborations with other institutions here and abroad, which has resulted in several high-profile exhibits of foreign artists. In addition, as a member of the International Fine Print Dealers Association, Ruiz-Healy remains active as a dealer of works by the likes of Picasso, Miró, Rufino Tamayo and other 20th-century masters.

So, what are her goals

There are two: She would like to have the opportunity to “discover” a promising new artist, and she is already planning to open a second Ruiz-Healy Art space in New York City. “That way I can be in the art market capital of the world,” she quips.

Fall Brings a Fresh Pick of Jazz, Art, and Events to the SA Entertainment Scene

Local Attractions Now Open as Alamo City Begins to Reopen Now that summer is here and San Antonio is ready to reignite its economy, several area attractions and museums have opened their doors again although with safety and social distancing guidelines in...