Folc: The Food is Both Avant-Garde and Full of Comfort 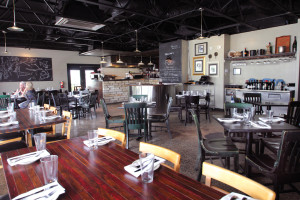 If you know where to look at Folc, vestiges of the old, cheeky-chic Ciao Lavanderia still remain. The open kitchen, at least from the dining room, appears pretty much the same. But what’s coming out of that kitchen could hardly be more different.

Chef and co-owner Luis Colon has put together—maybe fabricated is a better word—a menu whose categories (Fowl, Sea, Land and Earth) are nothing if not inventive, and the line between appetizers and mains is, fashionably, a touch blurred. (Hint: Logically enough, you can tell what’s meant to be a small plate by the smaller price.) The wine list, put together by Cecilia Barretto (she previously owned the wine shop, Vinously Speaking, in the Medical Center area), also defies expectations. All of this might initially seem challenging to those unfamiliar with Colon’s artful style — he did do a stint at Alinea, Chicago’s temple of avant-garde gastronomy, after all. Fear not: There are also comforts.

And we might as well start with one of them. At first glance, the pork schnitzel would appear to be one of the menu’s least ambitious offerings, mentions of hardboiled egg and capers notwithstanding. But it’s so impeccably done, right down to the crackling coating, the grilled lemon, and the beautifully dressed greens on top, that one can’t help but wonder why the dish has never seemed so good elsewhere. (We haven’t tried the fried chicken, but some consider it, too, to be Platonic in its perfection.) There are fewer points of reference with a plate such as the fried sweetbreads with coffee mayo, but here Colon’s rendition surely sets the standard as well. 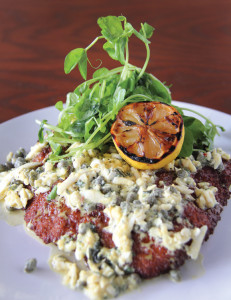 Coffee mayo is a favorite tool of the kitchen; it also appeared at the center of an unadorned plate of sliced Virginia ham. A few of the pieces might have seen better service in a broth (more on that later), but a Virginia-born dining companion pronounced the taste worthy of the Commonwealth’s seal of approval. Slabs of sturdy toast, grilled to produce just a hint of char on the ragged edges, are another part of Colon’s arsenal. They were served with a masterful duck terrine studded with carrots and pistachios, and they often serve as a base for toppings the likes of ricotta with pea tendrils (another kitchen fave) and a savory salt cod concoction.

Blending Land, Sea and Earth was one evening’s special consisting of lightly sautéed grouper and morel mushrooms over which a solicitous waiter poured a savory ham broth. Wisps of lacy and lightly licorice-like chervil, an herb seldom seen hereabouts, lent an air of vanishing spring. By publication time, a new menu will have moved squarely into summer mode, so we suspect that those other harbingers of spring, asparagus, may have been replaced by something more seasonal. Too bad, for these unabashedly fat and carefully trimmed spears, presented with button mushrooms and peas in rich cream sauce and adorned with more chervil, were one of one evening’s highlights, serving to direct attention away from a deviled bone marrow dish that didn’t rise to the same level. And yet, on another occasion, an appetizer portion of marinated hamachi with micro herbs and a fan of Asian pear was both handsomely plated and deftly seasoned. Maybe Sea trumps Land—logical if you think about it.

That wine list, by the way, yielded pinot noirs from both Chile and France that were supple enough to go with pretty much every dish. The dessert menu offered up a moist butternut squash cake plated atop a lightly sweetened squash purée and accompanied by a scoop of lush, house-made cajeta ice cream, all dusted with dehydrated brown butter. (Dehydrated meringue is another of chef’s tricks.) Next time, we intend to try the double chocolate cookie with beet sherbet and chocolate powder. 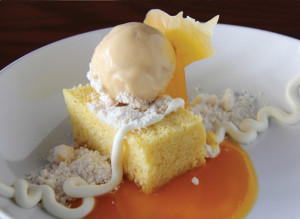 Some of that same alchemy can be found next door at sibling establishment Park Social cocktail bar, helmed by David Naylor, an alumnus of Alinea’s The Aviary bar in Chicago. Any of Folc’s plates can be had at the bar, and though the drinks listed on Naylor’s menu will seem as unfamiliar as most dishes issuing from the kitchen, their execution is impeccable. And you can always start slowly with a classic Manhattan or Negroni, building up steam and courage from there. Planned for the future is conversion of an intervening space into a “fine dining” venue, at which time the complex will graduate from double- to triple-threat status.