A Woman of Many Talents: Christie Beckham loves the theater 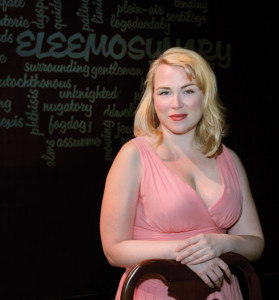 Actress/director Christie Beckham believes in the power of the Tsar Bell. That 20-foot-high bronze bell sits on a pedestal inside the Kremlin for tourists to admire and touch if they want to return to Russia. “I touched the bell,” says Beckham, who first visited Russia with fellow theater students from Texas Christian University. The magic worked. Nine months later, she was back in Moscow, this time thanks to an intensive acting program organized by the National Theater Institute. While there, the young actress spent a semester studying at the famed Moscow Art Theater. “I was able to study with fantastic teachers,” says Beckham. “Our acting classes were actually in Stanislavsky’s house. We saw a beautiful production of The Seagull; I didn’t understand a word, but I loved it. But most importantly, I learned the Michael Chekhov (nephew of the great playwright) technique of acting, which I still employ and also incorporate it in my directing. It focuses on how you can achieve emotions and affect the energy between actor and audience by manipulating your body. It’s a fantastic technique.”

Today, Beckham practices and teaches the Chekhov technique mostly at the Classic Theater of San Antonio, which she joined in 2012 and where she also serves as director of education. This spring, she won critical praise for her portrayal of Portia in the Classic’s production of The Merchant of Venice and later traveled to Dallas to appear in playwright Sheila Rinear’s work Bound by Truth, part of the 365 Women a Year Playwriting Project that showcases plays about extraordinary historical and contemporary women. She is the recipient of two Alamo Theater Arts Council’s Globe Awards for best actress in both comedy and drama. “The Classic has the most professional productions in town,” says the actress, “the best actors and designers. We have fantastic artists here, so it’s a great place to apprentice with more experienced artists. I also like what they do, not only excellent productions of classic works but also modern classics. I think it’s important for the community to have a place like this. It helps make San Antonio a world-class city. Luckily, I got cast in The Firebugs (in 2012), and they liked me.”

As an actress, she enjoys developing a character through research and through the “physicalization” process during which she comes up with specific ideas about the character’s hair, clothes and gestures. When she was a student, directors rarely cast her in the ingénue roles, she notes. No Cinderella or Ophelia for her; she got the character parts, which turned out to be a good thing. “It taught me how to use my voice and body language to make my character more dynamic, to get noticed and steal a few scenes along the way. Now I am playing the long game. I want to do really good work in my 40s, 50s and 60s.” She has also developed a new love for Shakespeare. While in Moscow, she got “imbued” with the reverence her Russian teachers had for theater and their own classics. Playing Shakespeare makes her feel connected to history and generates in her that same feeling of reverence. It may take months of preparations, but the result is worth it. Classic’s co-founder and co-artistic director Diane Malone couldn’t agree more: “As an actress, Christie is extraordinary. She can do anything. She can make Shakespeare’s language sound like her native tongue. And she has a wicked sense of humor. She knows how to find humor in her Shakespearean characters.”

Multiple hats
Acting is just one of the things Beckham is responsible for, however. A “self-starter,” she’s in charge of the educational programs and social media publicity and lends a hand with grant writing as well. In fact, for our interview we meet at the theater before a rehearsal of yet another play, Eleemosynary, which Beckham is directing for one of the educational projects. Called Aim High, the initiative gives high school and college students an opportunity to work with a professional company. Another program that she developed from scratch, Shakes Alive, sends Classic’s artists to high schools to help students with their studies of Shakespeare and other classics. The students are then invited to see the company’s shows. There are also free nights at the theater for youths, sponsored by Rackspace Hosting.
“I did a survey last year, and 70 percent of the kids had never seen a professional theater production before,” she comments.

“Actually, you’ll be surprised how many adults in San Antonio don’t know that there’s high-quality professional theater here. I sure hope to change that.

“We need to bring theater to the people. If they see something awesome, it may induce them to seek more. Social media helps spread the word. But (with our educational programs) we are also building a foundation for young actors who want to stay in town and help the Classic to become really great. I am excited about that.” Beckham left a growing career in Dallas to move to San Antonio in 2007 “for a guy” whom she eventually married, though the union did not last. It took her a while to find her thespian niche here, but she eventually found it with the young and adventurous Overtime Theater, where again she wore many hats, eventually including that of executive director. That gave her the opportunity to build up the company and to work directly with new playwrights in developing scripts. “I am all about building things,” she says. Of course, she acted, too, and in fact, earned both Globes for plays by James Venhaus that she helped develop.
Though she likes it here and intends to stay, like many performing artists, Beckham also holds a day job as the office administrator for the HemisFair Park Redevelopment Corporation, where she has been put in charge of planning the opening bash for the new children’s playground area. Should Russia come calling again, though, she’ll be ready. “I touched the bell again before leaving the second time,” she says with a laugh. “I really believe in this bell thing.”