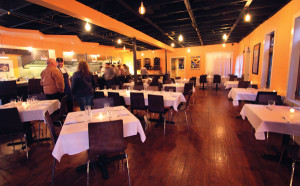 The Cinderella story of the last few years, at least in the food world, has been the move of many a fledgling restaurateur from mobile truck to fixed location. Though there must be some folks content with the gypsy life, the urge to settle down has got to be a powerful one, and when a chef makes a go of it, there’s a certain sense of we-knew-you-when. It’s as if we had collectively contributed.

One of the biggest recent successes has been New Orleans native Pieter Sypesteyn’s transition from his perennially popular Where Y’At “New Orleans Gourmet Street Food” truck (which remains active, in this case) to permanent digs at the old Carmens [sic] de la Calle space on Mistletoe. The place cleaned up nicely, taking on a coat of unrepentant coral color paint in the process, and it seems to have been packed from day one. Sensibly, lunch service retains a casual vibe with orders taken at the counter and po’boys wrapped in paper—just as they were when handed down to us from the truck window.

The Peacemaker, you’ll be happy to know, is as good as it ever was, its fried oyster and bacon powerhouse pairing still accented with pickle, lettuce, mayo and, if you take our advice, a jolt of the Crystal hot sauce found on every table. The surprise, at least to this eater, is that the more humble-sounding fried chicken liver po’boy is right up there with it in quality; don’t let its modest price tag fool you. And don’t think, as we once did, that the hot roast beef with gravy ‘boy is somehow less authentic; many call it the original version, and consider it as iconic, in the sandwich world, as the muffuletta (also on the menu) with its classic layering of cold cuts dressed with olive salad. A bowl of deeply satisfying gumbo makes a perfect partner to any and all of the above. Red beans and rice, more mellow seeming than most, are another superior sidekick.

But it’s at night, when service is more formal (yet very cordial) and the coral color is reduced to a more gentle glow, that the chef’s aspirations really shine on their own. We could eat the fried boudin balls ‘til the cows come home, reveling in the crisp crust that cradles an interior of succulent Cajun rice and pork sausage, delighting in the simple slaw, and relishing the house-made bread and butter-style pickles. The charbroiled oysters may be a more luxurious-sounding starter, but they sacrifice no flavor in the process of becoming fancy; the challenge here is to make sure you consume every last drop of the scintillating sauce they come adorned with. Go ahead, order the full dozen. 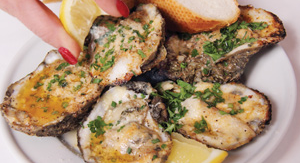 If it appears as a special or has made it onto the fixed menu, we also suggest — no, insist—that you order chef Sypesteyn’s bone marrow ravioli. In less competent hands the plush packets, capped with crab bathed in brown butter and decorated with pea tendrils, might seem cloyingly over-the-top — but not here. This rates as a favorite dish of 2014, and that’s even before we consider the accessory croutons and sweet potato nuggets. And though chicken dishes rarely end up near the top of our best-of list, the Chicken Pontalba at Cookhouse merits an exception. The bird itself is perfectly cooked, but almost as impressive are the precisely calibrated cubes of ham and Brabant potato that accompany it and the roseate sauce choron (a tomato-tinged Béarnaise variation) that pulls the plate together.

What little we got of a plate of tomato artichoke “canoli” (cannelloni is likely closer to the proper term) one night was impressive. “Each bit is a surprise,” said its fierce defender, and we’ll have to take her word for it, knowing that it counts on a combination of house-made pasta, tomato confit, artichoke hearts and goat cheese to make its magic. We can more confidently comment on the panéed pork cutlets, topped with more crab meunière and served with tomato grits and wilted spinach. The creamy grits may have needed salt, but everything else was impeccable; in retaliation we didn’t share a lot of our plate, either. 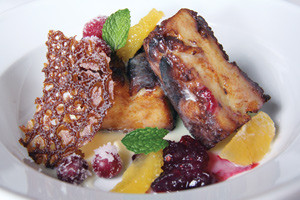 Aside from salt, about the only other complaint we have has to do with meringues: humidity is not their friend, and the piped orbs we were served alongside a perfectly poached pear with Creole cream cheese, toasted almonds and a stiff chocolate sauce were chewy. Sturdy is the adjective that comes to mind when contemplating the bread pudding, but the term is meant only in the best sense. And if we tend to think of white chocolate as being less worthy than dark, another exception apparently must be made; white chocolate sauce is just the thing needed in this instance.

The Jim Cullum jazz band offers entertainment on an occasional basis at Cookhouse. Cullum’s son, Chris, another food trucker putting down roots, is scheduled to become a more permanent fixture when he opens next-door Attagirl, an analogue to his popular Attaboy burger truck. Sypesteyn is already sharing the use of barbecue pits, left behind by the former Jamaican jerk place, for doing his own bacon. To both reformed truckers, then, let us say this: Keep on truckin’. With or without wheels.