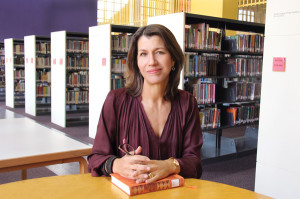 Back in 2013, during the first San Antonio Book Festival (SABF), Katy Flato served as moderator for a panel discussion between authors
Stephen Harrigan and Bob Thompson, who had both written books about hunting elusive legends. It was her role to address the audience first.

“So I welcomed them and then I said, ‘I am Katy Flato, the director of the San Antonio Book Festival,’ and they all started clapping. That’s when it hit me — we actually got it done!” says the now more seasoned director. “It was so heartwarming. We had been running on a very fast track to get the fest off the ground, a mad dash really, and it was actually happening, and everyone seemed to be jazzed up to be there.”

Though the audiences were relatively small that first year, the number of visitors more than doubled in 2014, and some 10,000 are expected this year. The 2015 event takes place on April 11 at the San Antonio Central Library and the Southwest School of Art across the street. Modeled on the Texas Book Festival in Austin and presented by the Library Foundation, SABF is a one-day free happening featuring readings, panel discussions, book signings and sales, music and food, as well as children and teen activities. Expected to take part are some 75 authors, whose books cover a range of genres, from fiction and poetry to all types of nonfiction, including cookbooks. Excluded are self-help, religion and self-published materials. In order to be invited, however, a writer has to have a new book to promote and sell.

“We want to keep it fresh, exciting and current,” explains Flato. “Other writers, especially Texas ones, may be invited to serve as moderators. Since we are in San Antonio, we have our own personality and goals,” she adds. “We like to have books on military issues, the border, immigration, water and the environment.” The person in charge of selecting and contacting the authors is literary director Clay Smith, who did similar work for the Austin fest. He is “everything” to the festival since he knows the publishing industry well and has personal connections with writers and their agents. “He puts together a well-curated, multicultural, diverse program every year and figures out trends and themes for our panel discussions that are current and interesting,” says the director.

Writers, trends and new events
Current publishing trends — such as soldiers’ accounts of the wars in Iraq and Afghanistan, growth in young adult literature and new translations of world literature classics — will be reflected in the roster of writers and panel discussions. The 2015 invited writers include Phil Klay, the National Book Award winner for his war novel, Redeployment; the Marine-turned-novelist Michael Pitre, author of Fives & Twenty Fives; and Helen Thorpe, whose nonfiction work, Soldier Girls, deals with women’s war experiences. Two translators, Tomas Morin and Marian Schwartz, will discuss the challenges of literary translation, while young adult literature will be represented by Isabel Quintero and our own Naomi Shihab Nye, who just published a new novel for youngsters titled The Turtle of Oman.

Other participating San Antonio writers are David Liss, Sheila Black, Jan Jarboe Russell, Diane Gonzales Bertrand and possibly others. NPR’s Fresh Air book critic Maureen Corrigan, the author of a new work focusing on the importance of The Great Gatsby, will also be here, and many more. (At the time of this writing the list was not yet completed.)

And there are new events, too. As the director, Flato oversees a fairly large group of Library Foundation staff and festival volunteers who are all pulling together to enhance the fest and make it fun “for the well-read and those who need to learn to read well,” as she puts it.
One interesting new event is Pitchapalooza, a competition conceived by Book Doctors Arielle Eckstut and David Sterry, who describe it as “the American Idol for books.” Anyone with an idea for a book gets a one-minute chance to pitch that idea to a panel of four judges who offer a critique, with comments on marketability and more. At the end, they choose a winner who later receives an introduction to an appropriate agent or publisher. We bet this will be a popular event. Also new will be a documentary film screening and a new pre-fest fundraiser called the Literary Feast, featuring Shihab Nye and Lawrence Wright.

Not surprisingly, Flato grew up reading and loving books. One novel she remembers well is The Mill on the Floss by George Eliot, her first serious book. “I was just mesmerized by it. It was the first time that I was taken by the actual writing style instead of just following the plot,” she recalls. The young woman earned a degree in English from Colorado College in 1981 and later found work at Texas Monthly magazine, where she started as an editorial assistant but eventually rose to the position of managing editor before leaving to have her first child. For three years she also served as the editor of Domain, Texas Monthly’s now-defunct lifestyle supplement. In fact, she met her husband, San Antonio architect Ted Flato, while supervising a photo shoot for that publication. The couple have two daughters.

Though she is not a writer, she missed working with writers, she says. To alleviate the problem, she became a volunteer SAPLF board member and threw herself into organizing fundraisers, readings and performances, featuring well-known literati and entertainers. Since 1995, Flato has directed the foundation’s Copyright Texas program, a free series of presentations by regional authors. That work earned her an Imagineer Award from the Mind Science Foundation. Her other community interests include Planned Parenthood and KIPP San Antonio, a college preparatory charter school. “I have been on the SAPLF board for 20 years,” she says. “The book festival was a natural growing step for us to do together (the library and the foundation). It’s a way to invest in our library system and to promote it.”

Since starting work on the fest, however, she hardly has time to read anymore. The various responsibilities keep her busy pretty much year-round, though the heavy lifting doesn’t start until January. One of those responsibilities that is close to her heart involves educational outreach. Last year some 300 underprivileged children were brought to the event to enjoy children’s activities and receive lunch and a free book. Another outreach effort involves writers going to speak to students and educators in schools and other child-centered organizations.

So, what’s the best way to experience the festival?
She is ready for this question: “Go online, print the schedule, study it, and plan your day. Otherwise you’ll miss something that may interest you. There are even apps to help you create your own schedule… If people just get to the festival, they will be swept away. My challenge is to get them there.”
For a list of authors and schedule of events go to www.saplf.org/festival