Their germ-killing robot is a scientific breakthrough 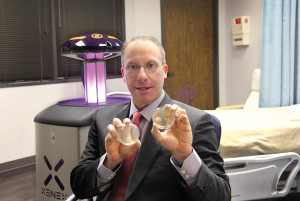 Before my interview with CEO Morris Miller, Xenex technical director Rachael Sparks volunteers to show me Eden, the company’s innovative disinfecting robot that emits high-intensity UV light to kill germs in hospital rooms, operating rooms and other health care facilities. Eden looks like a compact cabinet on wheels, out of which rises a mushroom-like “tower” when the machine is in operation. Sparks presses a couple of buttons, and we rush out of the room to observe Eden through a glass wall as it emits bright pulses of light. It takes only minutes to disinfect an area. Xenex was founded by scientists Julie Stachowiak, Ph.D., and Mark Stibich, Ph.D., in 2008 in Houston. Looking for investors and business expertise to help them develop a viable company, the two were introduced to Miller, the co-founder and former managing director and co-chairman of Rackspace Hosting. With Miller at the helm, the company relocated to Austin and later to San Antonio and reincorporated as Xenex Disinfection Services in 2013. The first version of Eden became commercially available in 2010. The technology that makes the robot work uses the nearly inert, nontoxic gas xenon, which emits powerful, broad-spectrum ultraviolet light (UVC) when activated by electrical discharge.

A lawyer by education, Miller is also the founder of Sequel and Cutstone Ventures, through which he invests in and acts as adviser to numerous startups and established technology companies.

How did you originally connect with Drs. Stibich and Stachowiak?
They were looking for help to bring their idea to market. They were working on this idea of a germ-zapping robot that they thought could work, but they had never actually put it into practice other than in their garage. They came to meet with me here in San Antonio and presented their idea. I asked them about their mission, and when they shared that with me, I was sold on it.

Was there already some solid research to support their ideas?
I think there was solid research that had been done on light devices sold on the market at the time. Almost all those devices at the time and still to this day are based on mercury light bulbs. Mercury light bulbs produce a narrow spectrum of UV light, and they were not very powerful. Ours is the first xenon-based system, which is broad-spectrum — 25,000 times as intense as sunlight — so they believed that it could be far more effective in disabling pathogens.

How was your first robot tested?
In 2010 we had the first workable robot that Mark and Julie took to the M.D. Anderson Cancer Center, where they ran trials, and those trials proved that it was 20 times better than standard methods of cleaning and disinfecting the rooms (traditionally done with bleach.) When we saw that — “20 times better” — we asked M.D. Anderson if they would publish that finding. They got it published in the Journal of Infection Control and Hospital Epidemiology. Then we asked them if they were going to buy it (the robot), and that was the true test. Once they bought it, we knew that they believed in the efficacy of the robot, and that’s when we started building the company in earnest.

What germs does the Xenex device destroy?
If you think of germs as a hierarchy, C. difficile is the hardest germ to kill. That means that if we can get C. diff on the top of the “mountain,” we can get everything under it more easily. We get C. diff in four minutes, which means we can get everything else faster, including things like Ebola. The military, at the Langley Air Force Base and at Fort Bliss, bought the robots as their No. 1 response should Ebola show up in soldiers returning to the U.S. Both hospitals where Ebola showed up in the U.S. were equipped with our devices, and the disease did not spread.

Are hospitals using it in conjunction with traditional cleaning and disinfecting or by itself?
That’s changing. Some hospitals do their standard cleaning with bleach, which was the best thing that existed for a long time, and then follow up with the xenon robot. But at M.D. Anderson, they don’t even use bleach anymore. They just use some kind of surfactant (detergent) to clean the removable dirt and then use Xenex for disinfection. More hospitals will realize that they can skip bleach, which will save them time and money.

How many health care facilities are using the Xenex robots?
It’s approaching 300.

How about San Antonio institutions?
The University Health System has six robots; the VA here has several, and Morningside Ministries got one robot at first and had a huge success with it within a short time. So they bought two more. They had a huge reduction of infections. People think these infections hit only the elderly — not at all! We had a situation in a California hospital where a mother came to deliver her baby, and both mother and baby got MRSA. The hospital did everything it could to prevent the spread of it, but within the next two weeks two more mothers and newborns fell ill. The hospital followed all the established guidelines for disinfection, yet the number of infected mothers and babies eventually grew to 60. In desperation, the infection preventionist called us. A robot was dispatched with a qualified technician. Within two days they disinfected the entire labor and delivery suite, and they didn’t have a single additional infection.

People don’t realize that HAIs (Healthcare-Associated Infections)kill more people than auto accidents, breast cancer and AIDS combined. That’s why I was excited to talk to your magazine. Mothers make the majority of health care decisions, and they need to know that there’s a solution to this problem. Talk about harnessing the power of the community to make a difference! We need to spread the word about it.

Where are the robots manufactured?
(Gestures toward the inner side of the building) About 100 feet from you. Almost every part is U.S.-made, and they are all assembled and engineered here.

Mr. Miller’s comments have been slightly edited for reasons of space and clarity.