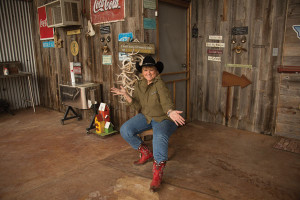 In March 2013, Sondra Grohman attended the National Association of Women Business Owners (NAWBO) local gala, where six high school girls with an interest in entrepreneurship were recognized as finalists in the business plan competition sponsored by the organization’s teen mentoring program.  The evening included a fundraising auction, so Grohman placed the highest bid on a diamond pendant and chain, thinking she was contributing to NAWBO. But when student Lorena Rangel won the top prize for her business plan, Grohman walked up to her, handed her the necklace and said, “I want you to give this to your mother.” Everyone was impressed. The gift came on top of the $10,000 scholarship donation Grohman had already made. “The purpose of the program is to mentor the girls, teach them basics about business and business etiquette,” explains Grohman, owner of Shining Star Energy, who is one of the mentors. “We have 13 schools and work with 140 girls a year. Lorena’s parents don’t even speak English, but both she and her sister have won the top prize. Clearly, the parents are doing something right.”
This kind of generosity is nothing unusual for Grohman. For the past 15 years, she has been helping youths through the San Antonio Stock Show and Rodeo’s Junior Livestock Auctions by buying the animals the young people raise and bring to the auctions. Last year, she was the top buyer. “I identify with these children and their struggles because I, too, worked on a ranch as a child,” she says. “My dad was a meat inspector for the city, but he loved the dirt and was able to buy a ranch for cheap. There was no running water and no electricity. And we all had to work very hard. We were a very frugal family. So I want to be the wind beneath these kids’ wings. I want to reward their dedication. It makes me feel like I am making a difference in this world, one child at a time.” Grohman’s other community commitments include the Dress for Success organization, where she’s a board member; the Valero Alamo Bowl Shining Star Energy Youth Football Clinic that she sponsors for hundreds of underprivileged youths; and a wounded warriors project dubbed Red Boots that she’s developing on one of her two ranches. In addition, she’s deeply involved in religious and missionary activities, but more about that later. 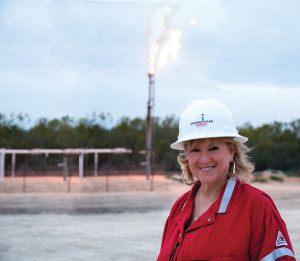 All of this was made possible by the discovery of oil on her Shining Star Ranch, which happens to be located in the Eagle Ford Shale area. Not knowing anything about the oil industry, Grohman summoned a team of professionals, including a geologist, a petroleum engineer, a mapping specialist, a financial adviser and lawyers, to help her navigate through the storm of offers she started getting from potential drillers. Then, she went one step further by visiting oil fields and various companies to learn about all aspects of oil and gas production.“I wanted to see how they do business from company to company, so I could compare,” she says matter-of-factly. With that knowledge under her belt, she communicated with the other 14 people who owned mineral rights under her land, suggesting how they, as a group, should go about negotiating with the drillers. Impressed by her hands-on approach, the group designated her their representative, and that’s how Shining Star Energy was born. Grohman eventually chose Chesapeake Energy from Oklahoma City, one of the largest oil and gas producers in the United States. When getting in touch with the corporation’s top guy proved difficult for her professional team, the enterprising lady picked up the phone herself, talked to his secretary and finagled the man’s email address from her. Then she wrote him an email with “marriage proposal” in the subject line, describing how she was seeing their potential future collaboration. The CEO was intrigued enough to respond within eight minutes. His subject line read “Yes, ma’am indeed.” The two ended up negotiating a $15 million deal plus $2 million for a religious retreat she wanted to build.
Though that CEO is now gone, Grohman continues to work with Chesapeake and monitor operations on the ranch. “I love my dirt, and I love my oil patch. My job is to make sure that the contract is followed and the land preserved,” she notes emphatically. Just recently, she flew to Oklahoma City to negotiate a deal for nine more wells, bringing the total to 26.

A woman of faith
Born and bred in San Antonio, young Sondra was an athlete competing in swimming, diving and track and hoping to become a PE teacher. Disappointed that she failed to make the cheerleading team (“My first major blow in life”) her senior year, she opted for a distributive education program (DECA) that gave her the option to leave school in the afternoon to work. After securing a job as a statistical clerk for the Federal Aviation Administration, she saw her interests begin to shift in the direction of business and entrepreneurship. Another disappointment reared its ugly head when a teacher decreed that she, a girl, could not be the president of the school’s DECA club even though she was duly elected by the membership. “But I wasn’t caught up in the title of something,” Grohman recalls. “I knew I could make a difference to that club, so I volunteered to be vice president and got into the trenches and worked.” 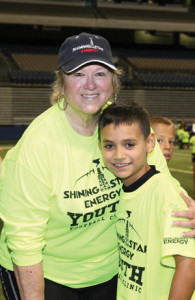 She got married right out of high school, had four children and worked alongside her husband for 28 years in building their family’s successful auto dealership business. Unfortunately, the marriage eventually ended in divorce, and Grohman found herself in a confusing and painful situation. “I was somebody’s wife, I was in the automotive industry, and suddenly none of that was there anymore. I had to figure out what to do with my life,” she says. What helped her to regain her balance were spiritual retreats run by the ACTS ministry, the acronym standing for Adoration, Community, Theology and Service. Slowly, she began to see the light at the end of the tunnel. One day, she promised God that if He would see her through her hardship, she would use the ranch to glorify Him. And she kept her promise. The ranch now hosts training programs for ACTS team leaders that the owner directs and funds. And she is active in other aspects of the ministry, including working with incarcerated women. “I have served thousands of women in helping them to gather their priorities and renew their lives through their faith journey,” she wrote in an email. On the practical side, while reassessing her position, Grohman eventually realized that she could go into business selling commercial deer hunting on her property. Nine long years passed before the “weird” phone calls about oil drilling rights started. At first, the calls scared her until she understood what was going on and took things into her capable hands, as described above. Eagle Ford Shale play is here to stay, she states, for at least another 60 years.  Young people should go into petroleum engineering because that’s where the jobs are.
A lifelong Roman Catholic, the businesswoman spreads her charity and efforts well beyond San Antonio. In Peru, she supports an order of nuns who run a school for disabled poor kids, and she has also served as missionary director for Feed My Sheep, a program that provided food and medical supplies to the impoverished population of Piedras Negras in Mexico. As if all of that weren’t enough, she’s now planning to develop a special recreational operation for wounded warriors and their families on her other, less developed ranch. As the daughter of a WWII “disabled veteran,” as they were referred to back then, she feels she’s the perfect person to provide this nature refuge for today’s hurting warriors.