The Monterey Serving up irreverence along with imaginative food 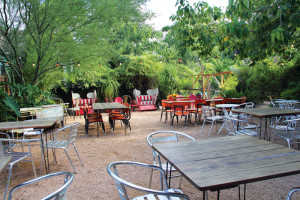 We can thank El Monty, as the restaurant is known by its familiars, for forcing us to endure San Antonio’s sweltering summers (and its attendant mosquitoes) out of doors — as that’s where most of the seating is at this otherwise extremely intimate (and willfully nonconformist) restaurant.

We can also nod appreciatively toward a menu that ventured far and wide — from offbeat-Asian dishes featuring sliced pig’s ear in spicy oil, to Brussels sprouts made safe for repeated consumption. There were quirky pickles and a boastful list of owner Chad Carey’s favorite rieslings. We are also grateful that, on Monty’s off days, Carey allowed debut chef Quealy Watson to play with his food at the Hot Joy pop-up — now a wildly successful brick-and-mortar nearby.

All of that but the attitude (and the temperature) has now changed. With the opening of Hot Joy, Monty’s menu became a little old — despite its status as a springboard. In response (we’re assuming), Carey changed its focus and hired a new chef, Luis Segovia, a CIA grad who has also worked at Andrew Weissman’s Sandbar and Il Sogno. The rieslings have gone, but the sherries that shared cellar space remain — along with the pickles. (We are especially fond of pickles in almost any form.)
You might otherwise be hard-pressed to recognize the food as issuing from the same kitchen. Smoked sausage corndog with house-made mustard? Fried creamed corn? A brisket burger with griddled onions and bacon mayo? But closer inspection (and a little eating) reveals that all the irreverence is not gone. And most of the flavor remains — augmented by slightly higher prices, however.

Strategically placed fans do manage to make outdoor seating moderately tolerable in July (though those pesky mosquitoes seem always to be able to find the quiet eddies), and a can of local Imperial Black IPA further aids and abets. Ordering a bowl as refreshing as cubed watermelon made tart with chile-lime powder and mixed with slivered jicama, mint and crumbled feta (we’d prefer bigger pieces) is a good defensive move. This is a perfect summer solution and one that could easily be knocked off at home — but why would you when it can be served to you by a waitress as proudly emblazoned with tattoos as the beer list is with craft brews? Bowls being a preferred method of serving, another might now arrive — just a little too soon, but that’s another thing that has not changed. In ours there was charred squid of remarkably yielding texture (with squid, it’s either quick cooking or long braising — nothing in between), slivered mango, more julienned jicama. The dressing will be just chile-zingy enough, the squid plentiful, the fruity mango in just the right proportion. There was an Akaushi beef special on this one occasion, but we were discouraged by its $28 price tag (otherwise, the most expensive item was smoked pork ribs at $18.50). 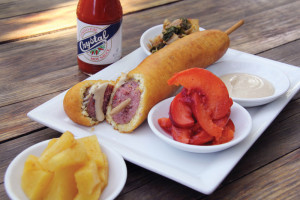 But had we been so inclined, Carey is now touting “expensive wines by the glass,” a claim made technically possible by the installation of a Coravin wine system that dispenses wine by piercing the cork with a fine needle. (An inert gas is then pumped in, forcing the wine out, and the cork “heals” much as you or I would.) A glass of 2011 Sina Qua Non Grenache from California, at only $60, would then have made beautiful music with the beef — though in truth, if we were spending this kind of cash, we would likely prefer a little air conditioning. Call ahead for interior seating should any of this be on your agenda. Other wines of more than passing interest are the 2012 Mollydooker “unabashedly huge” Blue Eyed Boy from Australia at a mere $11 a glass (maybe with beef tongue tacos), and the simpler, but more refreshing, Moulin de Gassac Picpoul de Pinet (at just $8) wedded to grilled shrimp aguachiles but playing around with the campechana El Monty of shrimp, bay scallops and fish collar on the side. Gotta keep that irreverence going.