Hemisfair is her backyard: Andi Rodriguez loving life in the Alteza 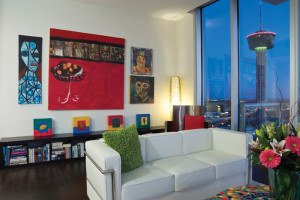 Remember years ago when the idea of high-rise living in San Antonio was just a wistful dream? Downtown living was for tourists in hotels; urban flight was in full swing. But now the city’s population is on the move again, and this time it’s heading downtown for apartments and luxury high-rise living. Andi Rodriguez is the epitome of a San Antonio woman who has made this urban lifestyle her own.

Andi lived in downtown Chicago for many years before relocating to the San Antonio suburbs. “I had no car in Chicago; I walked everywhere!” she exclaims. “I loved that vibrant downtown lifestyle, and I really missed it when I moved here.” At the time, there weren’t many places to live downtown. In 2012, the Alteza residences opened above the Grand Hyatt Hotel. This was just what Andi was waiting for. “I am a big proponent of downtown San Antonio,” she says. “I’ve worked here for years, and it just made sense to live here, too. Alteza offered the security I wanted, and the amenities were a plus. The concierge acts like a personal assistant — they can take care of anything I need.” What about those complaints that there’s no grocery store nearby? “I’m 10 minutes from the H-E-B at McCreless and only a few minutes from Central Market,” she says. “I’m near lots of convenience stores, in case I just need milk or eggs. And the hotel will send up food if I’m just too tired to cook or go out.”

High profile fits high-rise lifestyle
Andi doesn’t have a lot of time to sit back and enjoy the amazing view from her balcony. She’s been a writer and columnist for the San Antonio Business Journal since 2005 and currently works in the San Antonio Independent School District as the bond communications manager for the district’s new construction projects. She also serves as a planning commissioner for the City of San Antonio, dealing with land-use cases, and she holds executive trustee positions for various nonprofit boards.

“I’ve worked downtown since 2007,” Andi says. “I walk everywhere, and I’ve never felt unsafe. I know enough to be aware of my surroundings. My son, who is a high school senior, loves living down here. He goes to First Friday events, has had two internships down here and meets his friends on the River Walk. I don’t worry about him being out here alone because I know he’s safe. Living downtown has encouraged independence for him, and I know he can handle himself.” Andi gestures out her window: “Look at that. Hemisfair is my backyard! When the development there is complete, Hemisfair will become another Central Park, full of green space and places for recreation. I have all the amenities of a suburban backyard with none of the work. I just walk out there and enjoy.” 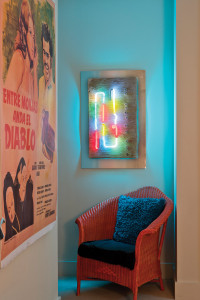 Fresh start
Andi made a conscious effort to start fresh when she moved into Alteza. “I had two red chairs and a mosaic table I’d made,” she says. “I brought a few books and some art I’d collected. Other than that, I approached this space as though it were a blank canvas. “It was cool to start fresh with so little,” she adds. “It feels very light, like I’m living light because I don’t have a lot of space or a lot of stuff. “Living lean is such a good lesson,” says Andi. “As Americans, we have so much stuff. How much of it do we really need? I had to decide to let go of many things, and I’ve found it freeing. I have little that needs polishing or dusting, and when I want to, I can lock and leave the apartment without a care.”

Local art on display
Visiting Andi is an exercise in security. Alteza has its own secure garage with private access, separate from the Grand Hyatt parking structure. Visitors wait in a small lobby for Andi to come down in a condo owners’ elevator, accessed with a security card. Security cameras in the elevator monitor residents’ safety. Beyond Andi’s front door is her “little piece of heaven.” She is a staunch supporter of local artists, and you see their work throughout her home. Entering the apartment, the first piece visible is a large picture by Beck Whitehead, chair of paper and book arts at the Southwest School of Art. “This is made of hand-pressed paper,” says Andi. “I like the texture of the paper and the colors she used.”

Across the hall is a small painting of Andi and her friends by contemporary artist Franco Mondino Ruiz. He also created the large painting in the living room of a couple walking a tightrope. “I love what this says about relationships,” Andi says. “Franco’s use of color is striking, and the building he painted reminds me of the Duomo in Florence, Italy.” Below this painting are several Beck Whitehead box paintings mounted above a low bookcase. Scattered around the room are other works of art by Lloyd Walsh, Dan Adams, Marc Hogensen and Kathy Sosa and an Eames chair. One of the most interesting art objects is a spring chair of a genre called “found object art.” “I found this in an art gallery 15 years ago,” Andi says. “It’s repurposed tractor parts. It’s probably the most comfortable chair in my home.” The living room is sparsely furnished with a low white leather sofa and two red chairs. Three bar stools provide extra seating when needed.

Where’s the dining table? “I don’t use a formal dining table,” Andi says. She usually eats at the kitchen bar if she’s home for a meal. “If I’m entertaining, I have a large foldout table in storage that I bring up and put in the empty space by the windows. I pull up the bookcases for bench seating, and we use the other chairs. I can fit eight to 10 people around the table — it’s cozy and fun,” she says.
The south-facing balcony is floored with Astroturf recycled from the Alamodome. “When they refurbished the Alamodome, they threw out all this good artificial turf,” Andi says. “I picked up enough for my balcony. Look closely, and you’ll see it’s marked with one of the yard lines.” 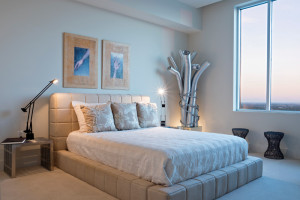 A short hall leads from the living room to her son’s room, where more local artists’ works hang. Andi was able to purchase six familiar faces from Sarah Brook Lyons’ 1005 Faces exhibit; they are displayed in this hallway. Over the bed is a chalk artwork by Tony Ortega titled Impala Lowrider at Chichén Itzá. Two old reproduction movie posters hang on the opposite wall. The guest bath is an example of fine workmanship. The shower walls are of stone tile; the cherry vanity features a granite countertop. The granite tile floors make for easy care. While the bathroom is beautiful and low-maintenance, the star of the space is a piece of tactile art by Robert Tatum. Titled The Color of Blind, it is urban art designed to be touched as well as viewed. Sunshine from the plate glass wall lights Andi’s bedroom. Her platform bed, dressed in beige and white, “feels very architectural.” And even though she has little time for it, a large flat-screen television hangs on the opposite wall. “I don’t even have cable,” she says. “If I have any time for viewing, I use Netflix.”

The master suite serves as a tiny gallery. Andi displays two photographs layered with wax over her bed. The photos are of hands in different positions. On another wall is a Waddy Armstrong canvas and one by her favorite artist, Alberto Mijangos. “Alberto documented his fight with cancer through his art,” she says. “He made his life and death into art.”

The spacious master bath has a beautiful tub and a wonderful view of Hemisfair. The glass-walled shower even provides a look at the park. Andi’s walk-in closet shows her to be a master of organization. Shoes are stacked in plastic boxes with photos of each pair on the end, so locating the right pair is easy. Her blouses are filed by color, as are her skirts. It’s all designed for quick grab-and-go dressing.