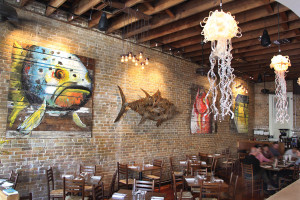 Draped nets and fishing floats and tempest-tossed lifesavers … the temptation must be great. I refer to the décor of so many knee-jerk seafood joints around the world — the aquatic equivalent of the serape-and-sombrero motifs that once defined Mexican restaurants.

In San Antonio, though some find it a tad too stark, Sandbar at Pearl blazed a path in the undraped design of restaurants with seafood as a focus. And now comes Starfish, a stylish new place at the entrance to Southtown. Sitting at the right hand of Azuca’s Latin-themed bar, Starfish is the creation of Diego Fernandez and his father, René, chef and owner of Azuca. There are no nets to be seen, nary a shellacked starfish in sight. Yes, there are a few vaguely nautical elements on the exposed brick walls, but otherwise the burden is borne by a series — a school, perhaps—of blown-glass light fixtures apparently inspired by the Portuguese man- of-war, a seductive but seriously poisonous sea creature. We will try not to read too much into that. The menu itself is inspired by the sea but not limited to it. Fernandez the younger is CIA Hyde Park-trained and has experience at restaurants that include a Ritz-Carlton in Florida — not a bad place to soak up some seafood savvy. Dishes have already changed some since the recent opening, but remaining favorite appetizers include a lightly cured catch-of-the-day crudo that is almost upstaged by its accompaniment of “compressed” watermelon. The Hawaiian poke (poh-kay, in case you’re wondering) of marinated ahi tuna with seaweed and cucumber can come across as somewhat soupy but is otherwise fresh and appealing.

The surprise starter, however, is the chef’s vegetable escabeche, enlivened, in one iteration, by beet-tinged cauliflower and studded with fava beans. It will vary depending on market availability, but your resolve to order it should not waver. I’m imagining that the bread salad (it would be called panzanella in Italian) will continue to evolve; at first sampling the bread wasn’t torn as promised, and the cheese also didn’t conform to its description (it’s now listed as “artisan” cheese, allowing for necessary substitutions). But with its handsome heirloom tomatoes (in season only, please) and tomato vinaigrette, this is a dish that should be experienced. Variations on a French bouillabaisse can be also be expected because of availability of fish; in Marseille, where the stew-like dish originated, all manner of so-called “trash” fish are used — but it’s just these otherwise unlovely components that make for a magnificent broth. For my taste, Fernandez may have abstracted this dish just a little too far, presenting a visually handsome bowl that’s not full-fathom deep. It is, in other words, too fine — though the tomato and fennel bouillon has hints of something intriguing. On the other hand, maybe it just needs another name on the order of Biga’s “Close-to-Bouillabaisse.” 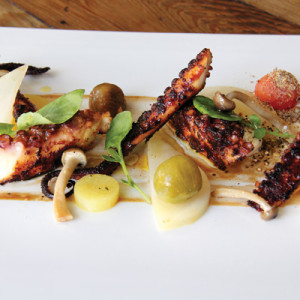 Shrimp were featured in that Mediterranean fish stew, but they show even more impressively in a homey dish with American roots: shrimp in grits with a chorizo vinaigrette. Lush and creamy, the grits would make a Southern grandma proud, and the chorizo adds just the right touch of Rhett Butler. Tiger shrimp are also fine in a Thai stir-fry with buckwheat noodles. Here, we only hope for a little more-typically-Thai cool-hot contrast to enliven the noodles and the roasted peanut sauce. One additional dish with watery origins — above, not below — is the duck pot pie served with a pomegranate reduction; it’s on the list for another time. The award for most-improved dish on the menu must surely go to the key lime tart. Originally presented in a unique, rectangular form that unfortunately emphasized the crust, it has been re-imagined as a more conventional tart with a torched meringue topknot, and it’s now a stunner. There were inventive aspects to the bitter budino, too, but despite a disc of toasty popped quinoa and some appealing rose gelée, the chocolate itself wasn’t emphatic enough — it’s our vote for the next dish to get a modest makeover.

In the meantime, there’s much to occupy the beachcomber, including a cocktail list that features the likes of a strawberry martini with Bombay Sapphire, Pernod, lemon and a house-made strawberry syrup.