All the right moves

Ballet San Antonio comes into its own 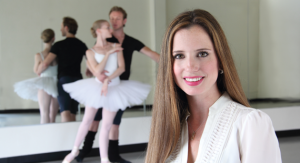 Ballet San Antonio’s president and executive director Courtney Barker has long wanted her company to play a part in the revitalization of downtown, and this fall a big part of that plan is becoming reality. Together with the San Antonio Symphony and the new opera company, BSA will be one of the main resident companies at the Tobin Center for the Performing Arts, the $203 million venue that transformed Municipal Auditorium and the adjacent riverbank into a state-of-the-art performance complex. “It’s extremely exciting,” exclaims Barker, whose office is in the Radius Building just across the street from the Tobin. “It feels like we are entering a new era for the performing arts, especially dance. Up to now, few venues in the city could accommodate major ballet productions. And now we’ll have a really good one. It’s a huge platform for our company, and we are ready to show San Antonians what a true professional ballet company they have.”

We are having this conversation in early August, almost a month before the Tobin’s Sept. 4 inaugural show that will, of course, include BSA. The dancers have already started rehearsing for the celebratory program, which includes excerpts from Swan Lake and Scheherazade as well as the gypsy dance from the opera Carmen. But there’s a lot more to come. With the 2014-15 season, BSA is asserting itself with all the right moves: richer and more challenging programming than ever before, high-level collaborations, a larger company and new additions to its artistic staff. The season officially starts Oct. 16 with Dracula, a beautifully crafted ballet that premiered in 2012 to great acclaim; continues with the perennially beloved Nutcracker and offers two new works in the spring — Romeo and Juliet and Donizetti Variations. While the first two productions have been choreographed by BSA artistic director Gabriel Zertuche, the last two are creations of legendary choreographers — respectively, Ben Stevenson, who built the Houston Ballet to what it is today, and the iconic 20th-century dancemaker George Balanchine.

“We are proud to give our dancers the opportunity to work with choreography by these world-renowned masters and to present these works to the public,” says Barker. “Getting the rights to the Balanchine work is huge for dance in San Antonio. We had to go through an application process with the Balanchine Trust to prove our artistic accomplishments, which included sending them videos of our recent productions. They’ll be sending former New York City Ballet principal Philip Neal here for a month to stage the piece.” Stevenson, who now lives and works in Dallas, will also dispatch experienced former stars to coach BSA through the rehearsal process for his Romeo and Juliet before he himself arrives to put on the finishing touches a week before the opening.

This artistic growth has been made possible by getting out of debt and expanding fundraising efforts. Since Barker took the helm of the organization, the budget has tripled, corporate sponsorships and donations have increased, and the company has grown to 32 members whose contract has been extended from 20 to 30 weeks per year. In addition, Barker has helped BSA gain more visibility and reach out further into the community. Last spring, the company held its first free Ballet in the Park show in Travis Park that exposed some 1,200 people to the art form. Through its Learning That Moves You program, it also gives a lot of free tickets to Title 1 schools (disadvantaged youth) and presents lectures/demonstrations in area schools. One program the president is especially happy about is BSA’s partnership with the Boys & Girls Club through which professional dancers teach free ballet classes to the kids on a regular weekly basis. The initiative has recently been recognized by the American Ballet Theater’s Project Plié that aims to increase diversity in the ballet world. Thus, outstanding San Antonio students may get a chance to study at ABT’s school in New York during the summer months.

Her dream job
Following in her mother’s footsteps, young Courtney started dancing early but “did not take it seriously” until the age of 12, when she enrolled in the Vladimir Marek Ballet Academy on a scholarship. It was intense training with classes six days a week. At 15, she was accepted into the Washington, D.C.-based Kirov Academy’s summer intensive program. Though the prestigious school invited her to stay for the entire year, her parents nixed the idea. Three years later, the now adult ballerina joined Ballet San Antonio, then under the leadership of founder Mayra Worthen. Back then, the company focused mostly on the holiday production of The Nutcracker, allowing her plenty of time to pursue a degree in communications at UTSA and later to work as a Realtor to supplement her dance salary.

“I learned a lot from my time in real estate,” says Barker, who still has the graceful bearing of a ballerina, “people skills, elements of finance and, of course, sales and marketing — all skills that help in my current job. In a way, I am still selling.” The difference is that she’s now selling ballet, arguably the most spectacular and beguiling of all the performing arts. “I always knew that I wanted San Antonio to have a full-time professional ballet company and that I wanted to be part of it. So I am really working in my dream job.”

Barker’s first nondancing role at BSA was that of community relations director, quickly followed by a promotion to executive director and an expansion of duties with the addition of the title “president” in January 2012. At that time, the board also announced the appointment of Zertuche as artistic director. In a few short years, the two have made huge strides in expanding BSA’s scope. Married to a Brit whom she met 11 years ago in San Antonio while both were in line at a Subway restaurant, Barker is the mother of two young children, one of whom — her daughter Nina — is “already practicing her arabesques.” The dancers call her Nina-ballerina. Though her husband, Matthew, had never seen a ballet before he met her, it didn’t take long to turn him into a devotee. “Early in our relationship, I forced him to come watch me dance in ballet class,” admits Barker. “He was amazed by how difficult and technical it was, and he has since turned into a huge fan and advocate of ballet. Not only does he attend performances, he has even volunteered (or maybe I volunteered him) to help backstage.”

She believes that most people would respond like Matthew did if given a chance to see a good performance. In fact, ballet’s popularity has been growing throughout the United States. Today, almost every big city has a professional resident company. “I want my community to have the opportunity to be exposed to this as other people in major cities across the world are,” says Barker.