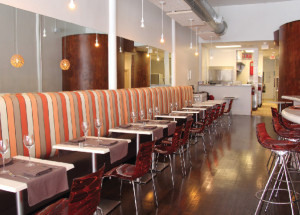 Behind an unassuming storefront on an only marginally more noteworthy block of lower Broadway lies an unexpected surprise: Saveurs 209, a thoroughly French restaurant run by a genuine French family — in rigorously French fashion. Transplanted Parisians Sylvain and Sylvie Nykiel operate the front of the house here; their daughter Caitline helms the kitchen. The Nykiels themselves are as annoyingly trim and chic as the spare restaurant, a simple white space enlivened by chair seats in unabashedly orange Lucite. Table settings are carefully considered with stemware appropriate to each wine by Villeroy & Boch and, should you need one, steak knives by the lauded French firm of Laguiole. (More on that below.) Nor does the menu deviate from things French, with appetizers on the order of a mousse de foie de volaille (chicken livers) with oyster mushrooms, and seasonally influenced entrées (bowing here to the American use of the term) such as monkfish with lemongrass. That this is not hearty bistro food is emphasized even more forcefully with the arrival of the first plate.

The “carpaccio” of St. Jacques with champignons de Paris and a dressing of walnut oil is lovely and lapidary in the manner of a classic Chanel suit, the overlapping leaves of translucent scallop and matte mushroom, lightly scattered with finely chopped chive and hazelnut, making for a stunning composition. But as with Chanel, the perfect accessory — say a simple silver circle pin (nothing as pushy as an Hermés scarf) — is often required. And such is the case here: The bright silvery acidity of a squeeze of lemon or a soupçon of zest might be one avenue of approach and would help lift the dish considerably. Couture references are risky, to be sure, but let’s push on: If the scallops were Chanel, the magret de canard with beet and palette-knife daubs of puréed potato might qualify as Balenciaga — Fall collection, of course. Just a little freer, in other words. Beet and duck play nicely together, but garnet betterave beats saignant duck in one respect: texture. Though the duck, capped by an unashamed layer of scored, crisp fat, was impeccably cooked and immensely flavorful, it would have been un peu resistant to an ordinary knife. Laguiole to the rescue and all was well. Other enticing main course possibilities included a bronzini with fingerling potatoes and an Angus tenderloin with polenta.

The wine list at Saveurs is as proudly Gallic as everything else, and it offers both bottles and glasses that have been chosen to work seamlessly with the cuisine — think essential shoes and bag. A glass of Macon Villages was listed as a pair for the scallops, and its citrus/almond character was altogether complementary. Though Bordeaux was suggested as a match to the duck by Nykiel pére (and likely would have been perfect), its $18-a-glass price tag was a little daunting. (This is as good a place as any to mention that though prices in general don’t reach Parisian levels, nor are they marché aux puces; plats principaux run from $26 to $39. Lunch is understandably more gently priced and perhaps a good place to start.) I chose instead a Côtes du Rhône Villages by Ferraton and was perfectly happy. It was the unexpected appearance on the list of a white Chinon, a rarity in these parts (the appellation is more known for its reds), that influenced my final menu selection.

Before noticing the Loire Valley bottle, the meringue-based Pavlova with seasonal fruits had been foremost in mind, but an abrupt switch to the plateau de fromages (amusingly asterisked with a “may contain milk or cream” note) seemed perfectly justifiable given the wine. I was pleased with both. 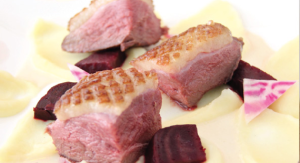 The Les Chanteaux blanc is a wine produced from 100 percent chenin blanc grapes, and its floral/mineral qualities tag it as distinctly French — and worlds away from the jug plonk of yore. Of the four cheeses on the board, two were as unique as the wine, two (the bleu d’Auvergne and the Petit Basque) more readily available at local sources such as Central Market. Concentrating on the exceptional, the Valençay is named for a town in central France, and its pyramidal shape, the top lopped off, is said to have been influenced by Napoleon. A young goat cheese, its clean, fresh and lemony taste was perfect with the wine. The Vacherin Mont d’Or was even better. This is an ultra-unctuous cow’s milk cheese often simply eaten with a spoon from its wood-strip container. (It’s a winter cheese and will soon be off the menu.) Fortunately, the container was not presented, and I was able to depart with a degree of decorum.

Decorum now suggests this conclusion: Saveurs presents a unique opportunity to explore an aspect of French cuisine San Antonio has not seen enough of. A willing audience should also give the chef an opportunity to build upon an already solid base. This is San Antonio, after all, and we take the notion of (robust) tastes seriously.

Women on the Move: Ann Reeder

After nearly 15 years at Spectrum Reach, Ann Reeder is pleased to join the teams at The PM Group and SA Yes as a Special Projects Manager.  Reeder’s experience includes advertising and marketing, event planning and project management.  Prior to working at Spectrum,...

BEAUTY: Love the Skin You’re In

For most, Winter weather means dry, dull skin. To keep up with changing seasons, routines, diets, and stress, it’s important to make sure your skincare routine stays updated! There’s not a one-size-fits-all solution for skincare woes. Luckily, there is a whole world...

Travel: ​A Trip to the Wayback

​​The Wayback, Austin ​​The tranquility of the Texas Hill Country is minutes from town but miles from ordinary. By Carly Summers & Jenna McElroy  ​​ ​​When traveling from San Antonio to Austin, I always take the scenic route to enjoy the Spring wildflowers,...