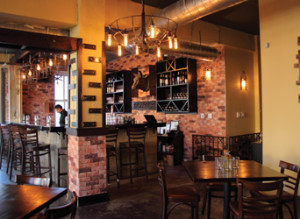 Let’s talk tortillas. No, not that kind; the tortilla española, a ubiquitous presence in the country’s many tapas bars, is Spain’s answer to France’s quiche and Italy’s frittata. Except that it’s at once simpler and more profound than both. In its Platonic form, the dish begins with potatoes and onions poached, for lack of a better word, in copious amounts of olive oil. The mixture is then drained, mixed with beaten egg and allowed to stand for a few minutes so the egg and potato can get to know one another. The tortilla is then fried on both sides with much nervous-making flipping. It can then be cut into wedges or squares and served with a tomato salad, a simple tomato sauce … or just a toothpick. Which brings us to Barraca, a new restaurant with a Spanish lisp in the Blue Star arts complex. Barraca (the name means cabin in Spanish, though the place aims for a touch more urban sophistication) bills itself as “a Spanish-influenced tapas bar,” and in an era of anything served in small portions being called a “tapa,” we could use a real one. The tortilla accordingly feels right at home, and, after a shaky start, the chef/owner is beginning to get it right. I’m not convinced by the spicy, salsa-like tomato sauce served underneath — leave that for a breakfast taco de papas, which is basically an excuse for salsa. And I could do without the goat cheese and the chorizo, though they add a note of luxury. Potato. Onion. Egg. Olive oil. Get those right, and little more is needed. Barraca is tantalizingly close.

The urge to embellish traditional dishes has to be almost irresistible to a chef, especially one working in a different culinary culture. Spain’s classic paella, a product of rice cultivation around coastal Valencia and, at least initially, of simple seafood or hunter/gatherer components such as rabbit or snails, has many variations in today’s global kitchen. Seduced by the eponymous Paella Barraca, I didn’t try the seafood version, which I suspect is the most true-to-original-form. As with much of the menu, modest shifts in ingredients have occurred since Barraca’s opening. An earlier version of the Barraca paella (all paellas are more than enough for two people) contained leg of lamb and duck, in addition to mussels, pork belly and chorizo. Currently, the duck is gone and the lamb has traded leg for shank. It’s an impressive pile, and the parts are both generous and individually good — though the shank is a touch dry. I seriously doubt that you could find such an eclectic combination in Spain, but assuming all the ingredients play well together, go for it — with one note of caution: In Spain, the dish is all about well-flavored rice with accent ingredients. Though Barraca’s rice is correct and its texture good, the tables here are turned; there’s just not enough of it. (We Americans do this to pasta dishes, too, tending to overwhelm them with sauce.) A more-pillowy platform for all the bounty would be appreciated. (BTW, I had initially thought that Barraca’s fideo paella must be a South Texas variant cooked up by the chef, but it turns out to have Spanish roots as well.) 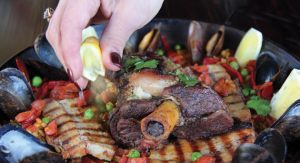 Back to the top of the menu and pintxos — really just a smaller version of tapas. Sadly, the anchovy piquillos have gone away; Americans seem to have a love-it-or-loathe-it relationship with the small silvery fish. But the smoked marcona almonds are a surefire crowd-pleaser and go well with a simple Spanish white wine such as the Legaris Verdejo; the spiced roasted olives seem to call out for the cabernet/tempranillo blend, Bodegas “C” from Spain’s Jumilla region. (Barraca’s wine list has been undergoing changes, too, but it continues to seem well-priced and is one from which it has so far been safe to order even the lowest-priced wine.) Other tapas of special note include those piquillos again (small, sweet Spanish chiles that are roasted and marinated), stuffed with duck carnitas and served with a fig balsamic sauce—all to impressive effect, and the croquetas of jamon serrano and goat cheese that are nearly classic until you get to the serrano chiles and the ancho vinaigrette. The patatas bravas, or “fierce” potatoes, are another classic served a little differently by Barraca, but worth trying regardless. Mussels and clams in a tomato-saffron broth are well-flavored, but the serving is a little sparse. The grilled coca, Spain’s pizza equivalent, comes topped with whatever the chef can conjure, so you’re on your own here.

If suggestions to the chef are accepted, let me put in a word for a plate of Spain’s exceptional hams and sausages beyond the usual serrano and chorizo. The same goes for a selection of its cheeses; there is much more out there than manchego. From the current menu, let me suggest to you the irresistible churros, the extruded, doughnut-like fried dough served with cinnamon-cardamom sugar and a stiff chocolate sauce. And also the crema catalana. This Spanish version of a crème brûlée is cooked on top of the stove but has the same caramelized sugar cap. Barraca’s version is perhaps less firm than one might expect, but the cap is sheer, shattering perfection, and the contrast is oddly thrilling. Have it with a glass of the moscato d’asti — even if it is from Italy.