A Passion for New Music 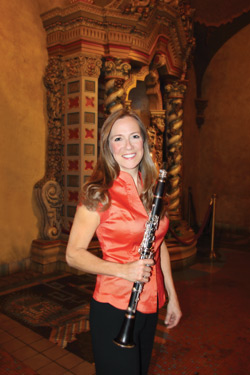 Last November, clarinetist Stephanie Key threw an early surprise party for the 50th birthday of her cellist husband, David Mollenauer. Months before, she had contacted one of the best-known contemporary music composers, Aaron J. Kernis, with an ambitious request: Would he consider writing an original piece for cello in honor of Mollenauer’s milestone celebration? Though busy with two other, larger commissions, Kernis agreed and sent the finished score to San Antonio in October. Unbeknownst to Mollenauer, the piece was scheduled to be performed at the January concerts of the SOLI Chamber Ensemble that besides Key and Mollenauer consists of violinist Ertan Torgul and pianist Carolyn True. “At the party, Carolyn said to David, ‘Look, I found this piece for cello and piano from Kernis,’ and she handed him his score, sat at the piano and started playing the opening,” recalls Key, for whom the entire experience was highly emotional. ”I watched his face as he looked down and saw the dedication. It was unbelieving, like, is this really for me? He was completely shocked. I was weeping at that point. I had been thinking about that moment since March. To be able to give him the music written for him that he will be able to play for the rest of his life was so wonderful.”

On Jan, 13, Mollenauer, accompanied by True, got a standing ovation after he performed Kernis’ challenging Second Ballad at Gallery Nord, a piece the composer described as ”lyrical, passionate and dramatic” and, we would add, almost romantic in its sweep and richness of sound. The work was part of a program titled Present, which itself was part of the group’s 20th anniversary season built around the theme of past-present-future. Like all SOLi concerts, this one was repeated the next day at Trinity’s Ruth Taylor Concert Hall. In addition to Kernis’ composition, the program held another commissioned work, Four Score, by Houston-based Anthony Brandt, as well as numbers by Libby Larsen, Thomas Ades and San Antonian George Cisneros, all of them living composers.

Key, who co-founded the ensemble with Mollenauer and served as artistic director until recently, couldn’t be happier. “We felt that we accomplished what we wanted to do,” she says. “Through the responses of the audience we know that we have represented the composers well. We poured ourselves into the performance, and the audience got it.” Indeed. Interestingly, while symphonic orchestras complain that audiences dislike the music of today, SOLI has been quietly winning the hearts and minds of a very supportive and enthusiastic audience. The ensemble is the only group in San Antonio dedicated almost exclusively to contemporary classical music and to commissioning new pieces. Since its inception in 1994, it has commissioned 40 works from both established and emerging composers, including Paul Moravec, Robert X. Rodriguez, Tim Kramer, Stephen Mackey, Alexandra Gardner and others. In 2013, the quartet won the Adventurous Programming Award jointly given by Chamber Music America and the American Society of Composers, Authors and Publishers. It has also received multiple grants from entities such the National Endowment for the Arts, the Aaron Copland Fund for Music, the local Russell Hill Rogers Fund for the Arts, the Tobin Endowment and the city of San Antonio.

“For me, the fire was ignited in college,” explains Key about her love of new music. “I was excited to play a new composition for a competition at school, something that had never been played before. I wanted to be a composer’s voice. (She won the competition.) And that’s also what is firing up this ensemble. Whenever possible, we like to bring the composer to San Antonio to work with us. We prepare the piece to the farthest point that we can before the composer comes, and then we work on the finer details. One thing that always strikes me is how grateful they are for the amount of time and love we put into the preparation. “Contemporary music is a tough animal, even for musicians,” she continues. “They often don’t understand it. I talk to young musicians who don’t even know the names of the best living composers. Yet living composers are the ones who are experiencing what we are experiencing; their work reflects our time. Can you imagine living today with the medicine or technology of the 19th century? So much has changed in those fields and all others, and we go along with the changes. I wish we had the same curiosity about the changes in music.”

You will play the clarinet
Growing up in a musical family, Key hoped to play the oboe until a school band conductor judged her hands too small for that instrument and decreed the then-10-year-old “will play the clarinet.” As it turned out, that was the right choice. “I love the clarinet,” says Key with a broad smile. “I love its soulfulness, its versatility, the colors and sounds I can produce with it.” It’s also beneficial for her health. “I used to get migraine headaches,” she adds, “but the controlled breathing that’s used in playing the clarinet made the headaches go away.” Her family moved to San Antonio when her father, Rhoderick Key, became the dean of fine arts at UTSA in 1981, and she considers the Alamo City her hometown. Though for a while young Stephanie entertained the idea of studying anthropology, music won in the end because of its unique ability to create connections between players and listeners. After years of playing in school and with the Youth Orchestra of San Antonio, she was off to Boston, where she earned a Bachelor of Music degree from the New England Conservatory of Music, following that up with graduate work at the California Institute of the Arts. It was during that time that she met her future husband at the Aspen Music Festival.

“I was smitten right away,” admits the clarinetist with more smiles and chuckles, but both were dating other people at the time. It took a few more years before the two eventually married in 1995 here in San Antonio, where Mollenauer had a job with the San Antonio Symphony. Later, Key also joined SAS, where she is presently assistant principal clarinet. It didn’t take the couple long to discover that they enjoyed performing together. The first chamber concert they played as a quartet, even before they had settled on a name, took place at University United Methodist Church. They remember rehearsing at a friend’s house. True and Torgul joined a couple of years later, replacing the original pianist and violinist. For years, they presented their concerts exclusively at Trinity but expanded to other locales in the past decade, such as the Blue Star Contemporary Art Center and Gallery Nord. Come next season, SOLI will become the only resident chamber ensemble at the new Tobin Center for the Performing Arts.

As the artistic director for 16 years, Key handled much more than what the title implies, including marketing, fundraising, outreach and all sorts of practical matters. She was glad to pass that baton to Torgul and see the duties become more evenly divided between the four members, she says. The organization also has a supportive board, chaired by Carina Gors, owner of Gallery Nord. Considering her passion for new music, has she ever considered composing herself?
She turns pensive for a moment before answering. “Composer Joan Powers said to me once, ‘You have to compose. It will give you a different perspective,’” she starts tentatively, then more affirmatively: “That may be the next story. For now, I know I can take someone else’s music and do something creative with it It’s such a gift to be able to play music.”