The generation gap does not have to be crossed with a leap of faith. Mentoring is a way to build a bridge between seasoned employees and those just coming on board — a two-way crossover that strengthens communications, encourages knowledge and idea sharing and is built on the foundations of trust and mutual respect.

Lynn Weirich, co-founder of Business Financial Group (BFG) and past president and co-founder of the San Antonio chapter of the National Association of Women Business Owners ® (NAWBO), uses a different method for mentoring, one that has proven successful in her 12 years with BFG. “I have learned to start with an open mind and consider each mentee as someone with unique experiences and talents,” Weirich says. “Sometimes the talents are undeveloped or unrecognized by the mentee. If so, it’s my job to help her discover and hone those skills and talents.” Weirich’s entrepreneurial spirit was kick-started by her mother, a full-time nurse. Her mother was a professional working woman who took pride in her career, serving on the boards of numerous nursing and community programs and helping to form an alumni association and scholarship fund for students pursuing nursing degrees from her alma mater. As busy as she was, her daughter never felt like she had to stand in line for her mother’s attention. “She always placed her family above everything else,” Weirich says. “But she also expected us to respect her ambitions and desire to do things she was passionate about.”

Weirich then found her passion for financial planning by accident. While working in an information technology role in a large corporation, she was recruited by a life insurance agency to help the company incorporate the personal computer into its sales processes. Weirich learned about what people did in insurance, eventually falling in love with the business of helping people achieve personal and financial goals.

Others are born into their passion. Madeline Anz Slay, president of Madeline Anz Slay Architecture, PLLC, and president- elect of NAWBO San Antonio, was surrounded by the plans and drawings of her contracting father. “My father always told me that I could do whatever I wanted to do,” Slay says. “Even though I was going into an industry that was mostly male dominated, my dad made sure I knew I was capable. I looked up to him as an entrepreneur. He was someone who succeeded and who always told me I could do the same.” Slay’s first job was with the architecture firm Rehler Vaughn and Koone (RVK), where she was eventually promoted to associate. It was with RVK that Slay says she was exposed to every moving part of the architecture industry, from measuring to managing.

“RVK let me experience all the facets of running a project,” Slay says. “And when I told them that I wanted to go out on my own, they supported me, taking my accomplishment as a success on their part.”

One of the lessons Slay took from her mentee position into her ownership role was the value of relationships in the workplace. While at RVK, Slay watched the seamless business operations that came from clearly defined roles for each partner. “Each partner was the best at what he or she did and what roles they had, which made for proven expectations,” Slay says. “The lack of ambiguity built a great working environment on a foundation of trust and mutual responsibility.”
Weirich also took the foundation of her business from a lesson learned from a former mentor. After a lively discussion on business philosophy, a past boss told her that she shouldn’t be working for someone else and should consider owning her own business. The boss’s confidence and trust inspired Weirich to do just that. “I worked for him for the next seven years, and he gave me many opportunities to learn different aspects of running his business,” Weirich says. “We both benefited from the mentoring relationship in the end. I was motivated and eager to learn while I worked with him, and I benefited because I was preparing myself to lead my own business.” Weirich and Slay took what they learned as mentees and applied it to their business practices, both with employees and clients. They agree that when it comes to mentoring, you must have an open mind, consider each mentee as an individual with distinctive proficiencies and, most importantly, understand that as a mentor, it is your responsibility to realize and sharpen their gifts.

Amanda Ashley, once an intern with BFG and Weirich’s mentee, is now operations coordinator in the employee benefit services division, thanks in part to this approach. “Based on my strengths and interests, [Weirich] developed a career path that will eventually have me in a position where I assist in developing the best strategy for our clients,” Ashley says. “It will be my way of continuing to help people protect their financial futures.” Another important job of a mentor, according to Weirich and Slay, is to make sure everyone in the company is involved in the mentee’s development. By getting other employees involved, you not only enrich the mentee’s experience, but you also build relationships within the company.

Sometimes to work on mentees’ talents, it takes telling them where they can improve. Weirich and Slay emphasize the importance of feedback on work. “I make sure my mentees understand the importance of doing whatever they can do to learn as much as possible,” Slay says. “Everything they do is an experience, absorbing it all and taking something from it. That one bit of knowledge or that single experience can be the deciding hiring factor in this competitive job market.”

Ashley agrees, saying that being told to simply “sink or swim” cannot only be intimidating for a mentee but also has the potential to build mistrust. “With BFG, I encountered a philosophy of teaching individuals from the ground up each component of their jobs, adding more and more responsibility as they progress,” Ashley says. “Having that experience made the job seem less intimidating and gave me comfort knowing I would be supported as I attempted new tasks. It was a ‘We’ll teach you to swim’ approach rather than the ‘Throw you in and see if you swim’ approach.”

A Mission To Mentor

Weirich’s and Slay’s passion for educating extends beyond the walls of their businesses and into the communities they serve. In 1999, Weirich helped launch an entrepreneurial mentoring conference through NAWBO San Antonio called An Income of Her Own® (AIOHO). The conference aimed to encourage young women to stay in school, open their minds to entrepreneurship possibilities and introduce them to a variety of industries and careers. Since the program began, NAWBO San Antonio members have helped grow the program to the nine-month mentoring and educational series of events it is today. The collaborative effort between NAWBO San Antonio members, school representatives and administrators, community leaders, local universities and corporate sponsors is focused on helping women achieve financial independence and career satisfaction. Women business owners who have sponsored AIOHO events this year include Beth Coyle, CEO of Coyle Engineering Inc.; Katherine Shields, a McDonald’s franchise owner; Blanca Welborn, owner of Med-National Inc.; and Slay. The 2010 AIOHO awards luncheon, which is the accumulation of the nine-month program, features more than $20,000 in scholarship awards. The event, on April 9, is open to all community members.

“As a mentor, the greatest benefit is paying it forward,” Slay says. “Whether it be teaching them how to draft a design plan or simply letting them sit in on an important meeting, you know you have made a difference in their life. You know you helped someone just the way someone helped you.” 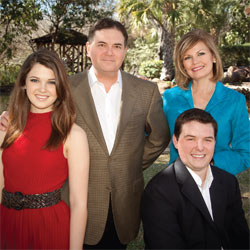 A black and white photograph of a young girl in a strapless full-skirted white dress, posed against a garden gazebo, hangs over Lynda Alston’s desk at ChildSafe. The viewer may think the young girl’s back is to the camera for artistic purposes, but it is primarily to... 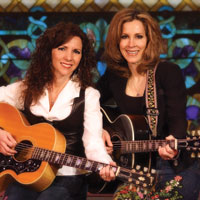 They Did It Their Own Way: Lisa and Roberta Morales

At a recent Songwriters Circle at Casbeers, petite singer/songwriter Lisa Morales unleashed such a powerful voice that musician Davin James was prompted to quip, She's sure got a big voice for such a little girl. Everyone chuckled in agreement. She has the kind of... 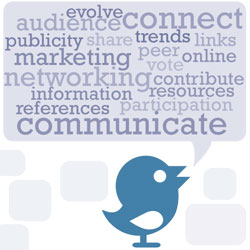 Are you on Facebook? Do you get a couple of invitations a week to join LinkedIn? Do you tweet or have a profile on MySpace? For millions of people the answer is “yes” to at least one of these questions. In addition, untold millions use e-mail, companies are developing...