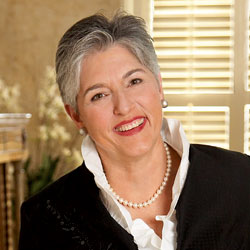 Linda Hardberger has her sights set on a watery horizon. “In a year and a half, we’ll be back on that boat,” she says with firm determination. She is referring to the 42-foot craft on which she and her husband, Phil Hardberger, spent more than a year sailing the waters off the East Coast, the St. Lawrence Seaway and the Great Lakes, back in 2003 and 2004. It was supposed to be the start of retirement for the couple. But, as most people in San Antonio know by now, he was urged by many local leaders to run for mayor, so the Hardbergers came ashore and returned to the city to embark on a campaign that was undeniably one of the more captivating in recent times: an experienced, respected (and older) candidate running against a fresh, progressive (and younger) rival.
Nobody who knew Pari back in her hometown of Lafayette, La., would have pegged her for a job in television. Growing up, she was a rather plain tomboy who wasn’t the least bit interested in doing anything she couldn’t do in jeans and a T-shirt. Except Linda Hardberger, wife of the elder candidate, was not what you’d call captivated. “I was really angry when he decided to run for mayor,” she says. “I thought we’d decided that retirement — the boat — that was what we really wanted to do.”

But, she says, she understood and accepted his decision to come out of retirement to enter — and win — the mayoral race. Now in her second term as first lady of San Antonio, she’s channeling her frustration into finding ways to make the best out of her husband’s role to elevate ideas, issues and projects that combine her passions with her vision of San Antonio’s future. The experience helped Pari see herself through the eyes of others, and it boosted her confidence. By the mid-1990s, she’d reported for stations in several markets and was working in Austin when she learned that a station in San Antonio was interested in her, not as a reporter, but as a news anchor. Linda Morgan Hardberger grew up with a broad worldview. Born in Mexico, she was the daughter of American media correspondents. As a young girl, she also lived in Italy and Spain, coming to the United States as a teenager to attend boarding school. Her parents’ profession couldn’t have prepared her, though, for the sudden, worldwide media attention cast on her as a survivor of the S.S. Andrea Doria, which was struck by another luxury liner, capsizing in the Atlantic in 1956 on its route to New York. Much has been written about the event, and historical accounts still center on Hardberger’s unlikely and dramatic rescue. Hardberger, however, has decided she will no longer discuss the experience publicly, though she will admit that it still finds ways to touch her life. Throughout their marriage, Linda Hardberger had been content to let her husband live the adventurer’s life for the two of them. While he relished the challenge of trans-Atlantic voyages and daring expeditions, she preferred the quiet, predictable stability of a curator’s life, working more with objects than people. The boat was symbolic of much more than the start of their retirement. “Philip has chosen several different things to do over his lifetime,” Hardberger explains. “Other than getting married and moving

to San Antonio, the boat is the first thing he’d done that involved me.”

Besides the idea of concentrated one-on-one time for two people who had led pretty different lives, the boat also meant that Hardberger would have to make peace with any fears she had about being out at sea. “Fear is feeling like you’re not in control,” she says. “With my background, being on a boat all the time was a little nerve-wracking at first.” But she learned how to maneuver the boat, how to read navigational charts and how to chart a course. “I felt like I knew where we were going, and there was a real sense of accomplishment,” she remarks. The couple agreed that they would never lose sight of land on their maiden journey. Once on the water, the experience transformed Hardberger. “There was a moment of ooh, 24/7, within a few feet of each other at all times,” she laughs. “It was fabulous, it really was.” Life on a 42-foot boat is going to be tough if you can’t work with your mate. Hardberger discovered that she and her husband had to work together, something they’d never done in their years of marriage. “You can’t run a boat unless you’re a team,” she says. “You’re each dependent on the other; if you don’t do your part, he can’t do his part, and that’s not the way we’d lived our lives.”

She marveled in the new experiences and found that she liked a little adventure after all: “I really loved going from place to place and meeting all of these wonderful people along the way.” Unlike acquaintances formed in other areas of their lives, she explains, friendships were made on the common love of boating. “Three days a week we’d go in and tie up — I like fresh food. You meet people who anchor by you. You look at where they’re from, and you talk about the journey. We met a plumber from Port

Author and a Hollywood producer. The language of entry wasn’t art or politics, it was boating,” she says.

On dry land until her husband’s second term as mayor ends in 2009, Hardberger immerses herself in her passion for the arts and her love of urban living. Currently the director and curator of the Tobin Foundation for Theatre Arts, Hardberger has a career that has intimately connected her to the Tobin family’s renowned art collection since the 1980s. Private but not reserved, Hardberger had to push her personal envelope to take on the role of first lady. She had never before been defined by her husband’s professional interests and social obligations. “I like people, I’m just not good at sitting down at banquets next to someone I’ve never seen before,” she says. “I was accustomed to making my own choices as to what I wanted to support and what my social life would be, and all of a sudden that was not as open a choice as it had been before.” Hardberger accompanies her husband to events, guessing that they are out four or five nights a week. She marvels at the experience of being with the person everyone wants to talk to. “I’ll walk in first and people will say ‘hi,’ but then they see Phillip behind me, and suddenly I’m not the person they want to talk to. It can be hard on the ego sometimes.” She describes the public’s expectations of the wife of a political leader as “a thin line. There’s one group of people who want the traditional candidate’s wife,” she explains. “The other group wants women to stand up and be their own person and do their own thing, but there’s still not enough acceptance of that.”

At the beginning of her husband’s first mayoral term, Hardberger had some ideas — however vague — about how her husband’s job might intersect with her passions. “We started talking about the things I care about, like art, urban spaces and community gardens,” she says. Hardberger discovered that her husband’s job gave her a platform she didn’t have before. “We’ve come up with some pretty good projects and visions for the city,” she says. One such project was the Main Plaza redevelopment project. To Hardberger, a public common space that was central to both government and commerce seemed essential. “Growing up in Mexico and Europe, plazas and piazzas were always a big part of town life,” she says. Opposition to the project, which focused on vehicle traffic, surprised her, but she understood it: “We’re very wedded to our cars, and we hate to close streets, but I think if it’s done right, it will be a lively place and a big success.” Hardberger is also behind a community gardening project in the city. Although she doesn’t garden, she’s a lover of fresh food and a proponent of forming close-knit grassroots communities in urban spaces. With 23 garden projects in the city to date, Hardberger says the benefits are far-reaching.

“You get people outside, getting to know their neighbors, being active and eating good food,” she explains. Hardberger hopes that as the program grows, it will extend into pubic housing and area schools. If Hardberger has her way, her husband won’t consider running for other political offices, and she won’t be here to see the city change as a result of her husband’s mayoral legacy. “In a year and a half, we’ll be back on that boat,” she says. This time, she’s looking forward to losing sight of land and exploring distant seas. “I’d love to sail the Adriatic and the Mediterranean,” she says. “I’d like to have 10 more years on the boat.”