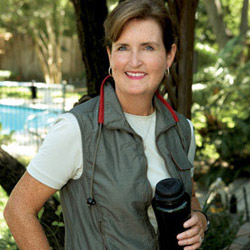 Like her father, Suzanne Cheever Goudge never assumed she would work for her father out of college. With her bachelor’s degree in accounting from the University of Texas in hand, she applied at various accounting firms, but elected to stick with her first love, the family banking business. San Antonians know the locally owned and operated business as Broadway Bank.

“At that time (1976), women were just on the verge of getting into business,” says Goudge. “I’m not sure I would have liked being the first woman accountant to work at a large firm. I definitely think my career in finance has been a little easier than what some of my contemporaries experienced because of my special circumstances.”

Those special circumstances are a result of her grandparents’ quest for a little hometown convenience. Her grandfather, Col. Charles E. Cheever, Sr., was stationed at Ft. Sam Houston as a lawyer. He and his wife, Elizabeth Cheever, lived in Alamo Heights. While walking in their neighborhood one day, they lamented that there was no bank close to where they lived. All the banks were downtown.

Seeing this void and envisioning San Antonio’s future growth, the couple went to the local library and researched how to open a bank. They got it started in February 1941, with World War II looming on the horizon. Col. Cheever was sent to Europe to work as a judge advocate for Gen. George S. Patton, leaving his wife, Betty, to deal with the newly launched bank and raise their two children, Charlie and Jane.

Goudge says her grandfather made a deal with the other investors that if any of them were unhappy with the arrangement, he would buy them out. “Most of the bank’s customers were in the military and had been shipped overseas, so the default rate skyrocketed for auto loans, savings deposits dropped, and my grandmother had to deal with some very unhappy gentlemen on the board of directors,” says Goudge.

Everyone assumed that upon his return, Col. Cheever would work at Broadway Bank. After all, he’d become the majority shareholder after he ended up having to buy out most of the other investors. Surprise, surprise! Enter USAA, another local financial services company that was founded by and for military officers. “They made him an offer he couldn’t refuse, so he took a job with USAA (as CEO), and my grandmother still had to deal with Broadway Bank!” Goudge laughs. Col. Cheever served in this position from 1953 until 1969.

When Suzanne’s father, Charles E. Cheever, Jr., graduated from law school, the job offers he received didn’t promise a good living. His parents invited him to come work for the bank. He did just that, working his way up to become CEO and chairman of Broadway Bank. He retired in March 2006, having passed the CEO and chairman responsibilities onto to James D. Goudge, who also happens to be Suzanne’s husband of close to 30 years.

They dated in college at UT-Austin. Suzanne was an accounting major; Jim focused on finance. They married shortly after graduation. She went to work for Broadway Bank; he went into lending at National Bank of Commerce. Jim was working at Kelly Field Bank in 1989 when Suzanne’s father lured him to Broadway Bank to become the head of the lending department.

Ironically, Suzanne was the head of investments. “Here my degree was in accounting, and I ended up working more in finance. I really should have gotten a finance degree like my husband,” laments Suzanne. After her third child was born and Jim began working at the bank, Suzanne went on flex-time and later became part-time. However, their paths didn’t cross much at the bank because they worked in different areas.

Does the couple leave work at work? “I’m embarrassed to say no,” laughs Suzanne. “We talk about work all the time at home.” Even if she could choose her career path all over again, she would choose the banking world. “Maybe I could be a teacher, but really, I just love it [banking]. My husband and I are both math people.”

Today she’s on the bank’s board of directors and several committees, including investments.

Broadway Bank is now the largest independently owned bank headquartered in the San Antonio metropolitan area. It boasts $1.7 billion in assets and operates 32 locations in San Antonio and the surrounding area.

Although her work at Broadway Bank has certainly been important, Goudge also derives much of her satisfaction from volunteerism. “It just comes natural to me,” she says. “I enjoy being involved and making things happen.” Even before she had small children, she was involved with the Junior League of San Antonio. She’s worked with United Way of San Antonio on women’s leadership and was an investment committee member for the Sunshine Cottage School for the Deaf. And then, in 1994, while juggling work, four children and chairing the Zoo Ball, she had an epiphany.

“I occasionally came home for lunch for a little peace and quiet, a little ‘me time.’ I was listening to a tape by a psychiatrist who was talking about volunteerism,” remembers Goudge. “She said if you’re going to spend time and energy volunteering, it should be related to your children or family in some way. It was at that moment that I decided Suzanne Goudge needed to make herself a little ‘personal policy’ about extracurricular commitments.”

After that, she moved her focus and energies toward organizations that involved her children. “My mother had always been involved with the Girl Scouts, so I was no stranger to it. And with three girls, it was a no-brainer,” she says. From Girl Scout troop leader for all three of her girls, to serving as the PTO president at one time or another for virtually all of her children, she has adhered to her policy.

In addition to holding many positions with the Girl Scouts of the San Antonio Area and Alamo Heights Independent School District, Goudge has also worked with the Alamo Heights School Foundation, serving as a board member and as president in 2002.

Sticking to her policy has also introduced her to the world of junior and high school sports. “I was never really athletic growing up, so I’m even more proud of my kids for getting involved and excelling,” says the woman who confesses to shyness until she hit college. She’s currently the “team mom” for the cross-country team and girls’ soccer team that her daughter is on at Alamo Heights High School. “It’s hectic but a lot of fun. I always tell parents that if they want to know what their kids are up to, who they’re hanging out with, what their teachers are like, then they need to get involved,” she advises. “It’s such a great way to get to know other parents, tap into a natural support network and have fun with your children.”

With only two children left at home, her 18-year-old son and 16-year-old daughter, and a 21-year-old daughter still in college, Goudge hasn’t even started preparing for an empty nest. She ran for and was elected to the Alamo Heights ISD Board in May. Not a political animal, she refused to campaign for the position, even after an opponent entered the campaign. “I was hoping if they want me, they’ll elect me,” she says. Although she doesn’t have any formal background in education, as a school board trustee her financial acumen is put to good use.

Part of Goudge’s success and sense of fulfillment comes because she consciously leaves herself open to new experiences and ideas. “I think husbands and children push you,” she reflects. “They make you try things you never thought you could do because they have nothing to lose by urging you to do it. They’re so honest. Whether it’s telling you that you should change your hair or daring you to try rollerblades, they will help you to discover something new about yourself.” She’s found if you’re open to trying it, you’ll “have a lot of fun in the process.”

The magic Goudge has created within her family is kind of a “watch, learn, do” formula. “The thing about getting involved in your community is that you inevitably drag your kids with you and they end up helping,” she notes. As a result, her children are confident in their own abilities. For example, her son is the student council president and recently set up a blood drive at Alamo Heights High School, where he’s a senior. “It’s so amazing to watch your kids develop leadership abilities and do great things,” says Goudge.

“You never know what kinds of lessons your kids are picking up day-to-day from you and the experiences you expose them to,” she says. All of her children do some kind of volunteering, and the family as a whole seems to appreciate the effect on their lives. But it’s not just the community events or school activities that affect children; it’s family traditions too. Suzanne’s goal for family vacations is to visit and hike every national park in the country. To date, the family has hiked every year at some new destination.

This summer Goudge’s oldest daughter and her husband moved to San Francisco. Her daughter took her East Coast-reared husband on a whirlwind hiking tour, visiting Zion and Yosemite Parks along the way. “It’s kind of a compliment,” says Goudge. “It felt good that Sara had fond memories of those trips and wanted to share the experience with her new husband.”

She has also found that parents learn from their children. That same daughter who moved to San Francisco has been developing her cooking skills and regularly prepares gourmet-style meals. “I was never very confident in my cooking skills,” she confesses. “Then my daughter Sara started trying all kinds of new recipes, and I was inspired to try more things. As a result, my cooking has really improved, and I’m enjoying it more.”

With so much going on in her life, it’s a wonder that Goudge doesn’t feel overwhelmed or stressed. But she doesn’t. “I don’t think God gives you more than you can handle,” she says. “I think if you’re somewhat organized and have a supportive family, you can do a lot of things with your life you never thought you could.”

As for volunteer work, Goudge says she feels that we all have some responsibility to participate in our community and make it better. “But if you don’t like it or if you feel pressured into doing it, then you won’t enjoy it,” she says. “I’ve found it’s best to take on things that have a limited term, then move on to the next thing. That way you don’t get burned out or resentful.” And a word of warning from a veteran: Not all events are going to go perfectly, but she says they end up being some of the best stories of your life. “Take them all in because later they’ll be fun to repeat to others,” she confides.

“I have a saying framed in my bedroom that says, ‘Live life out loud,’ and that’s really what I try to do. I don’t want to look back and say ‘I wish I had done C9 ‘ but didn’t because I didn’t feel like it,” she says. “I feel like I have more energy now than I ever did in college. I think I was bored; I remember taking lots of naps,” she laughs. “It’s been years since I’ve had a nap.”