The little world of childhood … is a model of the greater world. The more intensely the family has stamped its character upon the child, the more it will tend to feel and see its earlier miniature world again in the bigger world of adult life. Carl Gustav Jung

Nothing is dearer to the heart of Dianna Burns-Banks, the 2006 president of the Bexar County Medical Society, than family — her own family and the human family. “Money and prestige don’t mean very much compared to family and relationships,” she says.

Burns-Banks, founder and co-owner of the South Texas Center for Pediatric Care, is the second woman to take the helm of the 153-year-old medical society. It is the oldest medical society in Texas, and with more than 4,300 members, it is the nation’s eighth largest. No one could be more pleased with Burns-Banks’ election than the first woman who headed the society. Neonatologist Dr. Rajam Ramamurthy said at the time of her own election in 2004 that she hoped she would not be the last woman to hold that position.

“I am looking at issues confronting us,” Burns-Banks says. “It’s almost a moral shame that we would be in such a rich society, and there are so many people who can’t get routine health care.”

Burns-Banks says the 4 million Texans who are uninsured are a tremendous burden on society. Because those without insurance lack access to health care, they resort to expensive alternatives, such as emergency rooms, she explains. They often don’t seek medical attention until a problem, which could have been managed with routine care, has reached a crisis.

“I’d like to see San Antonio sit down as a community and see what our health care system will look like in 2010. I would like to see a collaboration of business and the house of medicine look at what we need to be doing over the long term for a healthy San Antonio. These problems are not going to be solved immediately.

“What should schools be doing? They used to teach the food groups in science class. We are responsible, up to a point, for our own health. People need to be educated to that fact,” Burns-Banks says. “We are not a health-conscious society, and so many of our problems are related to lifestyle.”

Never before have so many children been overweight, leading to ever-younger people being diagnosed with Type II diabetes, which is almost epidemic in San Antonio, she added. “We don’t have gyms on the East Side, and we need walking trails,” she remarks. “In the evenings, hundreds of people walk around the track at the University of Texas.”

Insurance companies need to consider a proactive as well as a reactive approach to health care, which she believes in the long run would be more economical.

Burns-Banks’ five pediatric clinics employ 75 people working at locations in medically underserved areas of the community. She conducts her practice at the East San Antonio Medical Center on E. Commerce. “My partner, Dr. Linda Holley, and I have the same philosophy,” Burns- Banks says. Their practice is committed to providing the highest quality medical care to the children they serve, while emphasizing preventive services along with patient and family education.

The families of the doctor’s young patients are not affluent. Neither was her own family when she was growing up. However, they offered her something no amount of money could buy: They gave her a rock-solid foundation that has enabled her to accomplish the things she has achieved in her life.

Burns-Banks was born in the Deep South, in Meridian, Miss., home of civil rights worker James Chaney, who was slain in 1964 when he was registering Afro-Americans to vote. Her mother, Earline Mosley, taught in the Head Start program. Her father, Morris Mosley, was a mechanic.

“It was a sacrifice for them, but they sent me and my two sisters to Catholic elementary school,” Burns-Banks says. “It was a wonderful education. I learned peace and acceptance and tolerance. It is a blessed way to look at the world. I was the middle child, the peacemaker. I was a child who really believed we should turn the other cheek.”

During their childhood, bereft of television, Burns-Banks, her older sister, Mary, and younger sister, Joyce, enjoyed physical activities such as hopscotch and running games like tag and hide-and-seek.

They had little arguments that might begin, “Why did you borrow my blouse without asking?” They also hid under the covers at night in their shared bedroom and whispered so their parents wouldn’t overhear their secrets about dating protocol and other matters of great importance to young girls.

The sisters spent summer vacations with their grandmother and grandfather, Vera and Booker T. Cole, who grew apples, peaches, plums, peanuts, corn and sweet potatoes on a farm outside Meridian. Burns-Banks recalls, “We would fish at the creek, and if you wanted a snack, you found your own. Our grandmother would tell us to decide what we would have for dinner and then to go out and harvest it.”

She treasures the memory of long Sunday afternoon chats with her father about what was going on in the world and how to fix it. “Dad didn’t finish high school, but he was a champion of common sense,” she says.

“Mother was a hard disciplinarian. She could always handle things. Dad was the ultimate disciplinarian, but discipline problems never got that high. Mother always handled them. She was a lecturer. She had to let you learn your lesson. Dad was a fixer. If you had a problem, Dad would fix it for you. He taught you to have pride, and he taught that you took care of your family,” Burns-Banks says.

Until his death in 2002, her father was a lifelong stickler for punctuality. “If he told you to be home at 8:00, he didn’t mean 8:03,” she explains. He always insisted upon picking the girls up at school. They envied the other children who got to walk home. “At the same time, the children who had to walk envied us,” she remembers.

In 1972, Burns-Banks graduated with honors from Xavier University of Louisiana in New Orleans with a Bachelor of Science degree in medical technology. Serving as president of the Student National Medical Association was one of her many extracurricular activities and responsibilities during medical training. “I liked the laboratory and pathology part of medicine,” she says.

She started out in research microbiology at the University of Louisville medical school. She served her residency at the university’s Norton-Kosair Children’s Hospital and ultimately earned a masters degree in health administration from Trinity University in San Antonio, where she was honored with the Ted Sparling Award for Outstanding Executive Graduate Student. She is a Fellow of the American Academy of Pediatrics.

“When I finished medical school, I thought about going into surgery, but I always believe that God guides you the way you should go,” Burns-Banks says. She was guided to pediatrics.

She worked as an emergency room physician at Santa Rosa Children’s Hospital, but it was not fulfilling. “You fix patients, then they go away, and you never know what happens to them,” she explains. Burns-Banks, who enjoys gardening, found the long-term cultivation of children much more to her liking.

“I love some of these kids. You can watch them grow, and it takes so little to make them feel good about themselves. These little people can be molded. You can make them better people than they are. I love taking care of them. It’s a passion,” she says. Her patients want her to be proud of them. Some of them bring their report cards to show her.

Burns-Banks makes time to talk with her patients in the way her father had taken the time long ago for Sunday afternoon chats. She speaks with young children about growing up to be big and strong. She talks about the importance of exercise, getting enough sleep and eating the right foods. “A lot of them didn’t know what a vegetable is,” she points out.

She talks with the older kids about drugs, alcohol, smoking and peer pressure. She counsels them about problems and how to fix them. “I give money to a lot of causes. You can always give money, but the most valuable thing you can give is your time,” she says.

Burns-Banks also spends the time to practice what she preaches to her patients. She exercises four or five times a week, working out at the gym or walking three miles early in the morning. At 5 feet 5 inches tall, she weighs a fit 135 pounds. It runs in the family. Her mother, who is 76 years old, goes to the gym three times a week. Her sons, Army Capt. Michael Burns and Johnathon M. Burns, a second-year law student at Georgetown University, also are gym regulars.

Burns-Banks credits her mental wellbeing to her husband of two years, Michael Banks, a retired IBM executive and financial planner.

“He makes my life easier. I vent my frustrations on him, and he gives me a good perspective on life. We are good friends,” she says. Her husband also nudges her to slow down, sometimes telling her, “This whole day you’re going to say no.”

“I enjoy what I do, and I think I may have a bit of ADD (attention deficit disorder). I jump from one thing to another,” she remarks.

Burns-Banks has served or currently is serving on the boards of approximately a dozen organizations, including the National Association for the Advancement of Colored People, Respite Care, Girl Scouts of America, March of Dimes, the State Advisory Board for Managed Medicaid and Texas Military Institute.

She is chairman of the Pediatric Advisory Committee and associate medical director of Community First Health Plans. She is a former chairman of the pediatrics department of both Baptist Health Center and Methodist Metropolitan Hospital. She was chief of staff at Santa Rosa Children’s Hospital.

The San Antonio Express-News named her Female Entrepreneur of the Year in 1991. She also received the 2001 Candace Award in Recognition of Exemplary Achievement in the Field of Health presented by the National Coalition of 100 Black Women, San Antonio Chapter. 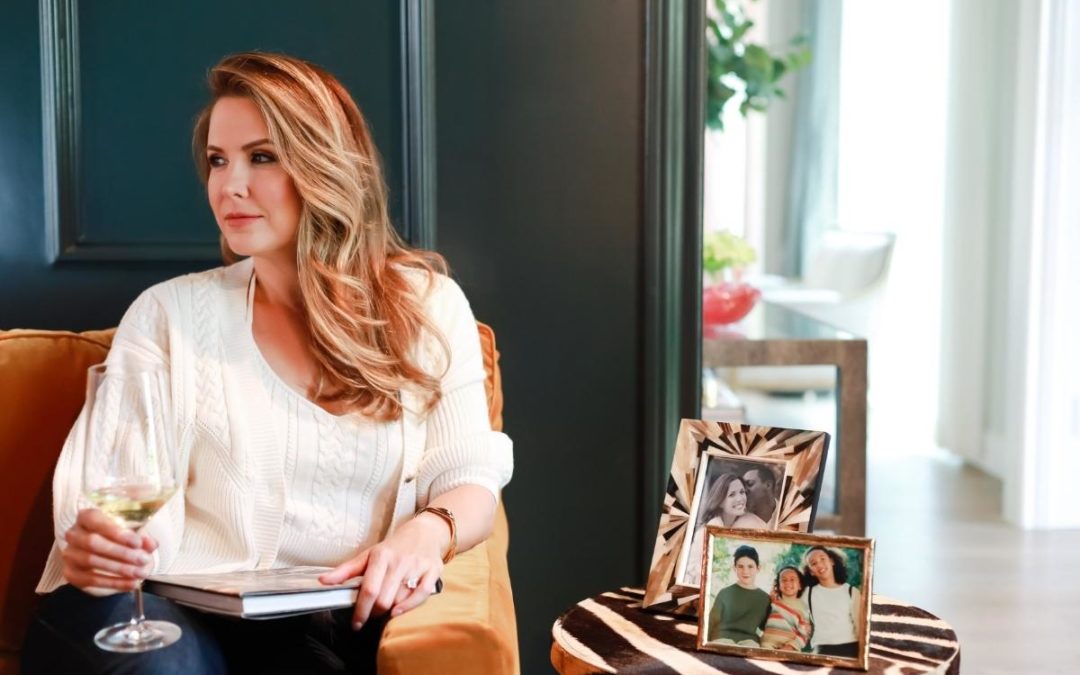 Claudia Zapata-Elliott Finding Peace through Health and Wellness By Dawn Robinette Photography by Brittany Paul Wine. Chocolate. Vegetables. They all fit in the world of "The Diplomacy Diet," Claudia Zapata-Elliott's new program that helps individuals make peace with...

Mona Helmy Passionately Manufacturing Life, Art and Success   By Dawn Robinette Photography by David Teran When Mona Helmy shares that she’d tell her younger self to be herself faster, it’s easy to understand why. Helmy, CEO of Helmy Plastic Manufacturing, is caring,...