Her Mission is Music: Pianist builds bridges of music and friendship

When Anya Grokhovski was five, her mother bundled her up one day, put her on a trolley and took her across town to a piano teacher she had chosen for her. There wasn’t much discussion about it. Her parents, both violinists, had decreed that little Anya would play the piano, and that was that.

The trolley ride took place 37 years ago in Moscow, but the grown-up Anya is still playing the piano, albeit seldom in her native city anymore. A resident of San Antonio since 1991, Grokhovski is not only a much admired performer but also the artistic director and moving force behind Musical Bridges Around the World, a nonprofit organization whose name sums up its mission: to expose San Antonio audiences to talented musicians from around the world.

She started MBAW six years ago, both because she felt she had something to contribute to her adopted hometown and for purely personal reasons.”I saw that the San Antonio community could benefit from exposure to artists from other cultures, especially European artists,” says Grokhovski, a vivacious brunette with an easy, friendly manner. “Our organization is the only one consistently mixing European, American and Asian talent. It proves that music is truly the international language that rises above politics. Sometimes we don’t like the French, sometimes we don’t like the Russians, but music endures and speaks to all of us.

“But there was also another reason why I started Musical Bridges. Back in Moscow, I belonged to what you may call an artistic intelligentsia, and I missed that communication with a community of artists when we got here. An organization like this recreates that sense of community for me,” she explains.

Today, MBAW is one of the most active musical organizations in town with a busy schedule of events, devoted supporters and a growing international reputation. The organization presents a series of four main chamber concerts a year, a number of special events, programs for children, several “salon” recitals called Musica Viva, summer jazz shows and the Child Prodigy Concert, which this year will feature nearly 20 gifted youngsters from around San Antonio. As the artistic director, Grokhovski is responsible for selecting the programming and booking the artists. She likes to mix vocal and instrumental pieces on each program, and she gives the piano the respect the venerable instrument deserves. Each concert includes at least one piano solo. Most recitals are conceived around a theme and given inviting titles such as “The Slavic Soul,” “Arias a la Asian” or “Franco-Russian Express.”

Coming up Feb. 14 is “Valentine Magic” featuring the American bass-baritone Timothy Jones, the Russian pianist Elena Nogaeva and Grokhovski with her violinist brother Mark Cheikhet, who still lives in Moscow. Also in February, MBAW will partner with Texas Public Radio to present a mini-festival of Gallic food and music dubbed “An Evening of All Things French.” More French fare is scheduled for May with “Francophilia,” a main series concert at the McAllister Auditorium spotlighting French musicians Francis Duroy (violin) and Hugues Leclere (piano). April offerings include a San Fernando Cathedral performance of spiritual music and the organization’s fund-raiser “D’s on Keys,” which puts musically talented MDs on stage for fun and profit.

And that’s not all. There are plans for an Italian series in the fall and special programs for the Keystone School. To make these musical riches accessible to young people, everyone under 18 is admitted free of charge.For a woman who came to the United States in 1989 with no knowledge of English and “no idea how these things were done in this country,” Grokhovski has come a long way.

“Anya is absolutely dedicated to bringing music into our daily lives,” says MBAW board chairwoman Susan Dunis, co-owner of the Dunis (tile) Studios. “She is unstoppable, and she doesn’t give up. You have to admire her for what she has done in the face of little money and traditionally not exactly giant audiences. She is also a powerful performer herself with a style that matches her personality. She and I complement each other well. I am more a behind-the-scenes person, while she is more like the star, up front.”

Grokhovski came to this country with her then-husband and fellow pianist Valery Grokhovski, who had obtained a visiting professor’s position at the Illinois State University at Bloomington-Normal. In 1991, the couple and their son moved to San Antonio, where Valery became a faculty member and Anya took a job as a staff accompanist in the music department at UTSA. She met a lot of people and learned a great deal of contemporary repertoire she had not been familiar with, but the four years she spent there were not the best of her life. After she quit her job, however, she also seemed to lose her way in life. “I was unhappy with everything at that time. I felt there were no venues for me. UTSA could not open another faculty position for me, but I felt that there should be more to life than being an accompanist,” she says. “I didn’t quite know what to do. For a year, I enrolled as a student (at UTSA) to study architecture, but then I started missing music. I felt like a child again, like I had nothing solid to hold on to.”

Fortunately, Moscow conservatory professor Boris Lvov came through San Antonio just in time to give her some good advice. “You have to play,” he told her. “You have been playing since you were five. It’s probably in your genes by now.”

Which was what she needed to hear. Before long, Grokhovski was on her way to Moscow to get her Ph.D. in piano performance. It took her three years, but by the time she returned to San Antonio, she knew that “it was the beginning of a new me.” Although she missed the cultural life of Moscow, she created a new life for herself here as a performer, teacher and the founder of MBAW, which she calls “my baby.”

Early on, Grokhovski was lucky to meet Dunis, who became instrumental in helping her set up the inaugural season. The first informal concerts took place in supporters’ homes, but the organization soon graduated to grander premises, holding a series of 18 events at the San Fernando Cathedral in its first year-and-a-half. It was mostly local musicians then, but the roster soon expanded to include European artists — many of them Russian. Nobody was more surprised than Grokhovski herself.”

It was like a totally wild thing,” she says, chuckling at the not-so-distant memory. “We had no budget to speak of, and I had no idea how these things worked in this country. I created programs out of thin air and invited local musicians to join us, which they did for very little money. Somehow it worked. We did so many different things already that first year.”

In subsequent years, the concerts moved to other locations around San Antonio as the community involvement steadily grew. Musical Bridges has repeatedly reached out to other groups in town, building friendship bridges between music and the other arts, the medical community, galleries, schools, hotels and others. This year, local visual artists have been invited to exhibit their work in the McAllister Auditorium during concerts, and each event has been followed by a reception prepared by International Friends. The latter is a group of foreign-born women who now live in San Antonio. Last year, they served their homemade goodies for “D’s on Keys,” and it was hard to pull concertgoers away from the buffet tables, says the artistic director.

Grokhovski’s networking skills have impressed supporters and observers alike.”Anya is a force of nature, she is amazing,” said violinist Stephanie Sant’Ambrogio, the founder of Cactus Pear Festival and the San Antonio Symphony’s concertmaster. “She is great in finding new collaborations in town; I am learning from her. She is obviously passionate about what she does, and she just lights up when she talks about it. She has a true commitment to keep classical music alive in San Antonio, which is especially important at this time (when the SAS is not playing.) I am impressed with Anya and always enjoy working with her.”

Grokhovski’s life is now definitely back on track. Though her marriage ended in divorce in 2000, she has recently met businessman and chess master Alex Weinberg, who is also Russian-Jewish like herself. With her son grown and pursuing his own interests, she is free to travel abroad every summer to perform at various European festivals where she meets many of the musicians she later invites to San Antonio. A year ago, she also made her Carnegie Hall debut with violinist Pierre Hommage in a brand new work, “River Side,” by French composer Francoise Choveaux. This summer, she will be performing in Serbia, Germany and Israel.

But her focus remains on the home front.”In Europe, going to concerts is part of daily life. In America we have to work on that,” she says. “I wish people would treat music as the treasure that it is. The music, the arts . . . that’s how I define the wealth of a city, by how much is happening culturally.” 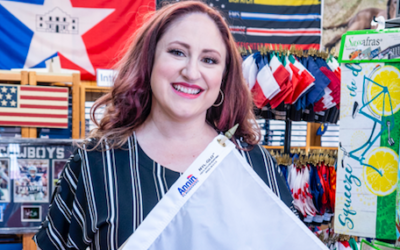 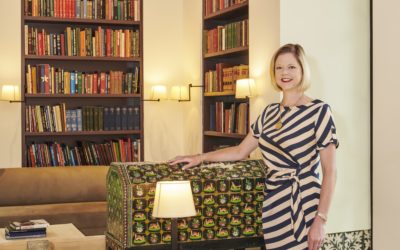