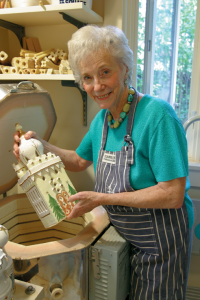 Nancy Pawel may not be the princess in the enchanted castle, but she certainly could be called the queen of castles.
The San Antonio clay artist started creating castle sculptures more than 30 years ago and never stopped. A dozen or so of her domed creations adorn her living room mantel, and castles-in-progress await finishing touches in the studio behind the house. Since the mid-1980s, when she began dating and numbering them, she has made more than a thousand items, each one different from its predecessors. The process, she says, is largely intuitive.
“I really design things as I go along,” explains Pawel, a charming 74-year-old with a patrician look. “I will do a series with one shape and then I’ll think, ‘Why not add another dome, or why not try this or that?’ It depends how each piece speaks to me. One idea leads to another and before you know it, you have more ideas than time to implement them.” A good many of the new pieces, together with sculptural figures of angels and “ladies,” will be on display at the Greenhouse Gallery of Fine Art from Dec. 8 through Jan. 10, 2003, where, once again, they are expected to attract enthusiastic buyers and admirers. So enthusiastic, in fact, that 50 percent of the show is likely to sell the first day. Prices range from $200 to $2,500.

“Nancy has a lot of followers in San Antonio,” says Clint Watson, Greenhouse co-owner and gallery director. “People buy her castles as Christmas presents a lot. They are fun and whimsical. She is the only ceramicist that we have found who exhibits world-class quality.” Carlos Salinas de Gortari, the ex-president of Mexico, owns a Pawel castle, as does Richard Olderburg, the former director of the Museum of Modern Art in New York City. The original inspiration for the “castles” — which are really miniature towers — came to Pawel during a trip to Europe in 1969. After the Pawel family visited relatives in East Germany, they traveled to Copenhagen in Denmark on New Year’s Eve. Walking the chilly streets of that city, the ceramicist noticed the many brooding, snow-capped towers that punctured the winter sky, and it occurred to her that she could reproduce those elegant shapes in clay. “My first castles were dark with pointed roofs like those in Copenhagen,” she says, “but then, several years later, someone showed me pictures of the churches and palaces of Leningrad (now St. Petersburg) in Russia. Those towers were all white and gold and often rounded. So that gave me a new idea. The minute I put gold on them, that’s when everyone wanted them. White and gold really struck a note.”

But Pawel’s creativity is not limited to the golden cupolas. She also is the artist behind a number of large public works, including the ceramic entry wall at St. Mary’s Hall (her first commission), the Stations of the Cross panel in the chapel at the former Kelly AFB, the 18-foot clay mural “Towers of San Antonio” at the San Antonio Children’s Museum and the Sleeping Beauty’s Castle at the San Antonio Botanical Garden’s Garden for the Blind. More recently, she designed the “Pool of Dreams” which consists of two 10-foot-high tile panels that were installed in the Ann Barshop Natatorium at the University of the Incarnate Word, where she taught ceramic art for 32 years. “After I was asked to do the wall at St. Mary’s Hall, I was a nervous wreck,” recalls Pawel, who executed that work back in 1970. “I didn’t tell anybody that I was doing it. I didn’t want any criticism; my ego wouldn’t take it. As an artist, you are putting your soul out there.”

But at the unveiling of the “Pool of Dreams” a few months ago, the now-seasoned artist had different feelings. “It’s about time. I’ve been here for 30 years. I should have been doing more of this. That’s what I felt,” she says with a chuckle. “But it was still wonderful.” Pawel first started putting her soul into her art shortly after she and husband Tom moved to San Antonio in 1951. With a degree in chemistry from Wellesley College, the Boston native took a research job in the School of Aviation Medicine, which was then at Randolph AFB. In her free time, however, she would explore craft fairs where the work of San Antonio Craft Guild potters attracted her attention.”These were people who glazed their pots. I thought this was chemistry in its most wonderful form,” she says. “We would buy several things, and then the following year we would buy more things. I became intrigued with the chemistry involved in the making of glazes. I think it was the colors I was attracted to.”

After quitting her job when she became a mother — a common practice in those days — she started taking classes at the now defunct San Antonio Art Institute and eventually received a potter’s wheel as a gift from her mother. The kitchen became her first studio. Soon, she was showing her work at the annual Art League Jamboree and at those same fairs that inspired her in the first place. By 1969, Pawel already had made enough of a name for herself to be offered a teaching position at UIW, from which she retired in 2001. She currently is an adjunct faculty at the Southwest School of Art & Craft. Through the years, the San Antonio ceramicist has exhibited not only here in town and in Texas but also nationally and even internationally. In 1998, several of her public art pieces were included in the juried International Ceramics Public Art Exhibition in Tapei, Taiwan, and in 1999, she took part in an international artists workshop and show in Ichon, South Korea. One piece she made, a stunning porcelain form titled “Lilly,” was selected for permanent display. “In the Far East, they are extremely knowledgeable. This is their true art. Ceramic shows will sell out at fantastic prices in Japan,” says Pawel, while showing her visitor catalogs from both events with photo after photo of highly original sculptures. Today, she continues her work with undiminished concentration. Following the Greenhouse opening, she will tackle several new commissions for murals, and at least two future one-woman shows already are lined up — at UIW in 2003 and at the Textures Gallery in 2004. For her contribution to San Antonio, Pawel recently received the rarely given Lynn Ford Craftsman Award from the San Antonio Conservation Society.
And the former chemist sill loves those beautiful glazes that enchanted her so many years ago.

“They are no longer fashionable,” she shrugs. “There is a tendency today to leave things unglazed to emphasize natural surfaces. Although I do experiment with surfaces and textures, I still like to test those glazes. As an artist, you have to remain true to what you want to do.”