Chef Johnny purchased an enormous, dilapidated building on an overgrown lot in a not-so-hot spot called “Beantown” about ten years ago. The mammoth brick edifice had served as a shoe factory, a cannery, a cleaning/dyeing plant, headquarters for a fur and hides trader, Lone Star Seed Company, Voss Metal Works, and the eclectic home of a decorator. It was an abandoned warehouse when Hernandez bought it. To Stein, it looked like a formidable factory, not a happy home — more nightmare, less dream house.

Stein, a busy executive for Mars Inc., had no desire to undertake a restoration of a more than 130-year-old, four-story, 12,000-square-foot scary building. But Hernandez loves big projects, and when he toured the property and spied a colossal Olmec head sculpture from Veracruz in the courtyard, he thought, “Wow! If that isn’t a message from God, what is? This must be for me!”

Three years later, the couple finally agreed to move into the building. But just as moving boxes were being loaded into trucks, Hernandez was called to London on business. He was supposed to be gone only two weeks, but two weeks turned into two months. So Stein tackled the massive move into “The Scary Building” without him. Luckily his sister slept over so Stein wouldn’t be spooked.

Seven years later, the “scary building” moniker is a memory that makes the couple laugh. Now the lovebirds (and their dogs) adore their extraordinary home.

Walls awash in brilliant happy colors are filled with arresting Mexican Folk art. Rooms ramble from one cozy seating area to the next. With hardwood floors charred by the metal works’ scorch marks, 14-foot ceilings, 12-foot windows, and cheerful interesting works of art filling every inch of the home, it is stunning. With angels, skeletons, lucha libre masks, hand-painted pottery, and hand-crafted ceramic Loteria Cards, Hernandez’s astounding Mexican folk art collection makes the hacienda seem like a dynamic museum. It’s astonishing to see huge Calaveras (hand-painted skulls) and fantastic mythical Alebrije animal creatures indoors. There’s even a 12-foot, hand-carved statue of “Michelangelo” (the archangel Michael) upstairs. Carved by Mexican artist Isidoro Lopez, it’s so large it got wedged inside the freight elevator (the oldest working residential elevator in Texas), where it remained stuck for months. Outside, a garden and a Koi pond with a metal custom-monogrammed bridge make the more than 2-acre lot a serene retreat.

Inside, a prickly-pear-pink TV room offers a bright spot to rest. In the lively key-lime-colored foyer, a secret door, hidden by a gilded carved panel, leads to a powder room beside the chef’s ever-inviting kitchen. The dining room is adorned with an intricately carved altar or ofrenda that is a show-stopper. Hernandez loves his cavernous man-cave, or “tequila bar basement,” as he calls it. Even by day, the dark space feels like a night​time outdoor courtyard with glowing patio lights strung overhead. Comfortable rustic Mexican chairs, called equipales, made from butter-soft pigskin leather and cedar strips, make guests want to sit and linger longer. Bright, eclectic art and ornamental tequila bottles conjure a classy cantina vibe.

Stein works long hours in her first-floor office and exercises upstairs in her giant home gym, while Hernandez works at his many restaurants, like the La Gloria, Fruteria-Botenero, and Burgerteca restaurants in their many locations, as well as at opening the new La Gloria in the new Brooks development and Casa Hernan in Southtown. He’s also active in his family’s True Flavors Catering business.

An equally interesting edifice on the couple’s property is a caliche and limestone house where Judge Roy Bean spent 15 years living with his wife, Virginia Chavez, and their four kids from 1866-1881. Locals began calling the area “Beantown,” before Bean left town to become the self-proclaimed “law west of the Pecos.” The oldest standing residence in Texas, the cabin is a restoration project Hernandez hopes to tackle with historical preservationists.

Although Hacienda del Morado is filled with skeletons and skulls, angels and devils, Day of the Dead spirit animals and heavenly works of art, it’s not a scary building at all. It’s a happy home filled with love, and it’s exactly where Jessica and Johnny want to be. 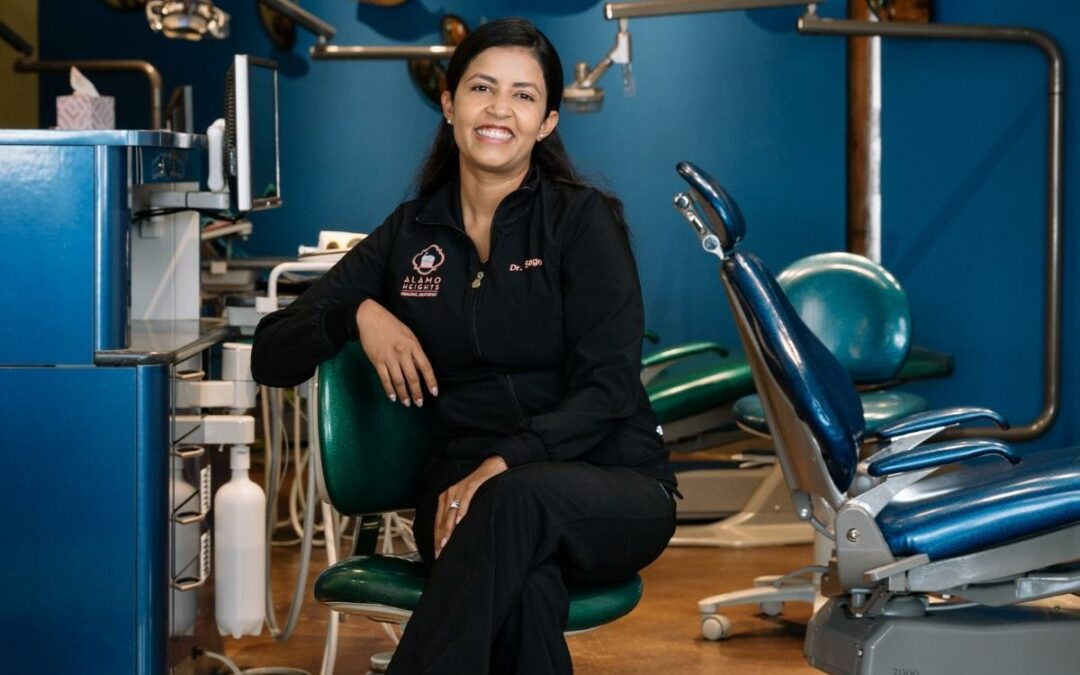