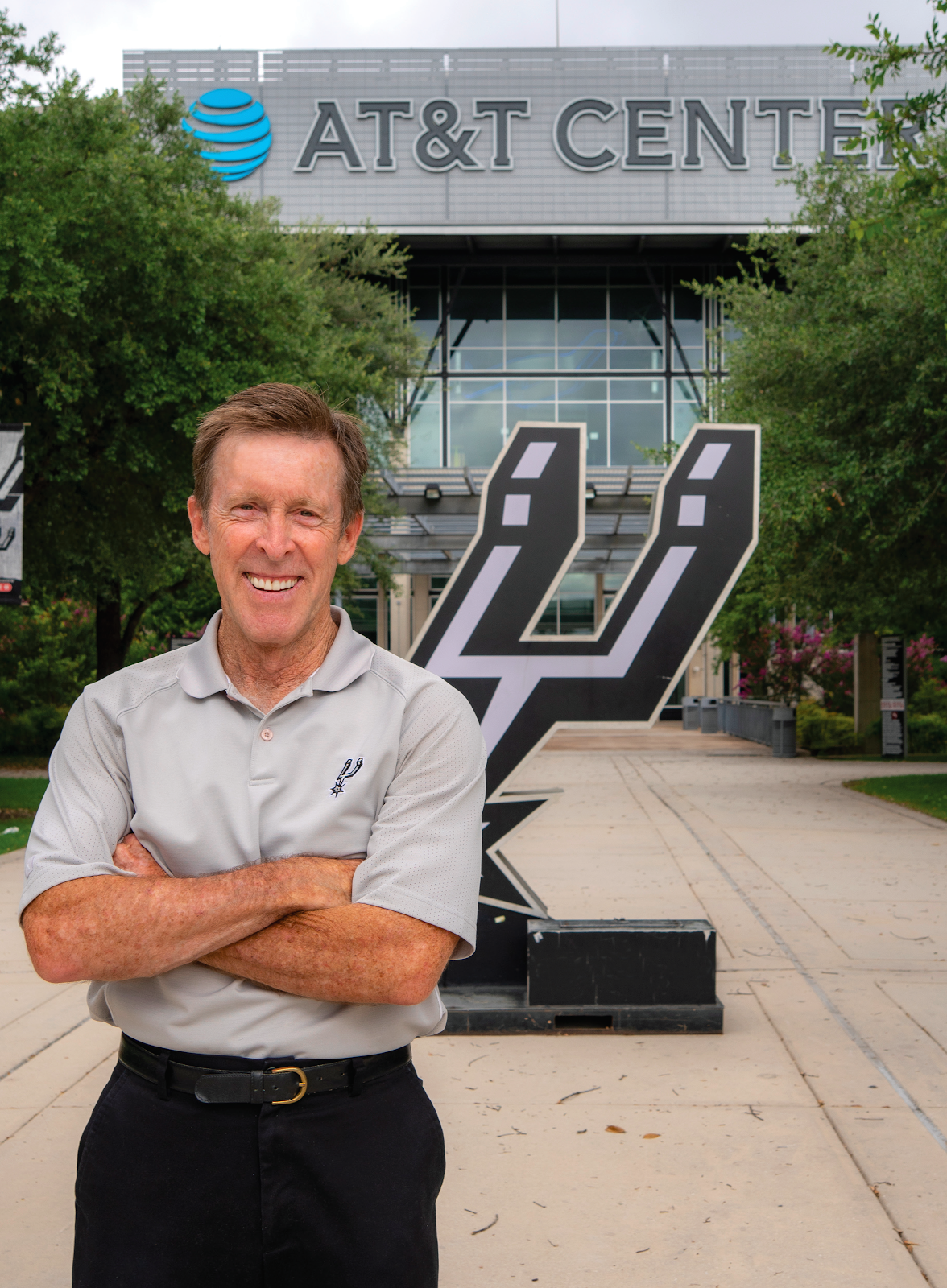 From Praised Mascot to Motivational Speaker

When San Antonioans hear the name Tim Derk, they immediately think of the always entertaining Spurs Coyote mascot who had crowds cracking up for 21 years. He’s charismatic, charming, and known for laughs on and off the court. Derk’s time in the Coyote suit came to an abrupt end in 2004 when he suffered a massive stroke, but his life since then has been equally entertaining and als inspiring.

You were born and raised in the Chicago suburbs. What brought you to San Antonio and how did you wind up as the mascot for the San Antonio Spurs?

I was a tennis player in high school and came down to attend Trinity University which I loved. When I graduated with a degree in business, I gave myself six months to figure out exactly what I wanted to do career-wise, and in the meantime took a job teaching tennis at San Antonio Country Club. That six months turned into eight years. I was teaching tennis lessons and also doing commercials and community theater at the same time. When attendance was low at Spurs games in the 1980s, they decided they wanted to bring on a mascot. They spoke with their ad agency who knew me. My life really plays out like a movie. I actually met my wife while out on the court as the Coyote.

In 2004, you experienced a massive stroke that ended your time as the Coyote and began a long road to recovery. What was that like?

I started having a few dizzy spells. I was so used to being uncomfortable as the Coyote, the dizzy spells were not exactly noticeable. They were lasting like 20 seconds, very brief. I was often dehydrated. I would lose six pounds of fluid each game from running around in the suit. I was used to being all beat up. I didn’t even tell my wife about it. One day near Valentine’s Day I had a massive stroke. I couldn’t walk, couldn’t talk and was paralyzed on my right side. I spent weeks in intensive care, and one day a nurse came in to take my vitals, and she had on a latex glove. She grabbed my right hand, and I could feel the latex. I couldn’t tell her that because I couldn’t speak, but I could feel a little bit of texture. With athletes like myself, all you need is one small bit of improvement and you seize it. That one small bit of improvement would grow. It motivated me. I went to a rehab facility after that for six months. Then, the first thing I did when I arrived home was crawl from my first floor to my second floor just to prove to myself I could do it. I then began walking on grass in the dark so my neighbors couldn’t see, and then into the street. And a year after my stroke, I ran 10 miles to the Tower of the Americas building, slapped it, and ran back home. 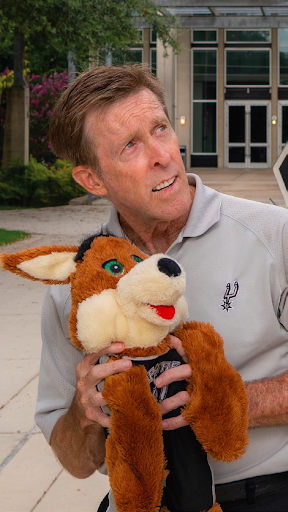 Since recovering from your stroke, you’ve written a book and are still working with the Spurs, just in a different role. What’s that like?

In the beginning, I was on the game operations side, working with the mascot and entertainment at the games, but now I’m the Assistant Manager of Internal Communications, which is really cool because I get to teach the history and culture of the Spurs to new hires and employees. It’s kind of funny to think I spent 21 years working and not saying a single word, and now all I do is talk with people. The Spurs organization was so beyond supportive after my stroke. When I was recovering, Coach Gregg Popovich came to my house at 4:30pm on a game day to check-in and see how I was doing. I received more than 10,000 emails from people sending well wishes.

Along with working for the Spurs, you also do quite a bit of guest speaking with people about stroke and life in general. How has speaking with others changed your life?

I started guest speaking when my book “Hi Mom, Send Sheep” came out, then began speaking about stroke and also my relationship with my wife, Colleen. Public speaking has lent itself to entertaining others and also getting the word out to others about stroke. I got this amazing opportunity from being an entertainer, and now I have another chapter in life that’s just as enjoyable.

Since recovering from your stroke, have you gone back to any community theater?

The stroke caused me to lose my pitch, so it’s something I had to work hard to rehab. I ended up going to the San Pedro Playhouse and auditioning for Damn Yankees, and I got the part of the devil. They gave me an award for “Outstanding Actor in a Musical” and at that point, I did a mic drop and walked away.

Since the stroke, your life has been about determination and proving you can do things. How has your mindset on life changed?

I think it’s human nature to begin to take life and all that it has to offer for granted. Everybody catches themselves. When you go through something like a stroke, you’re less likely to overlook anything. It definitely puts everything into perspective.