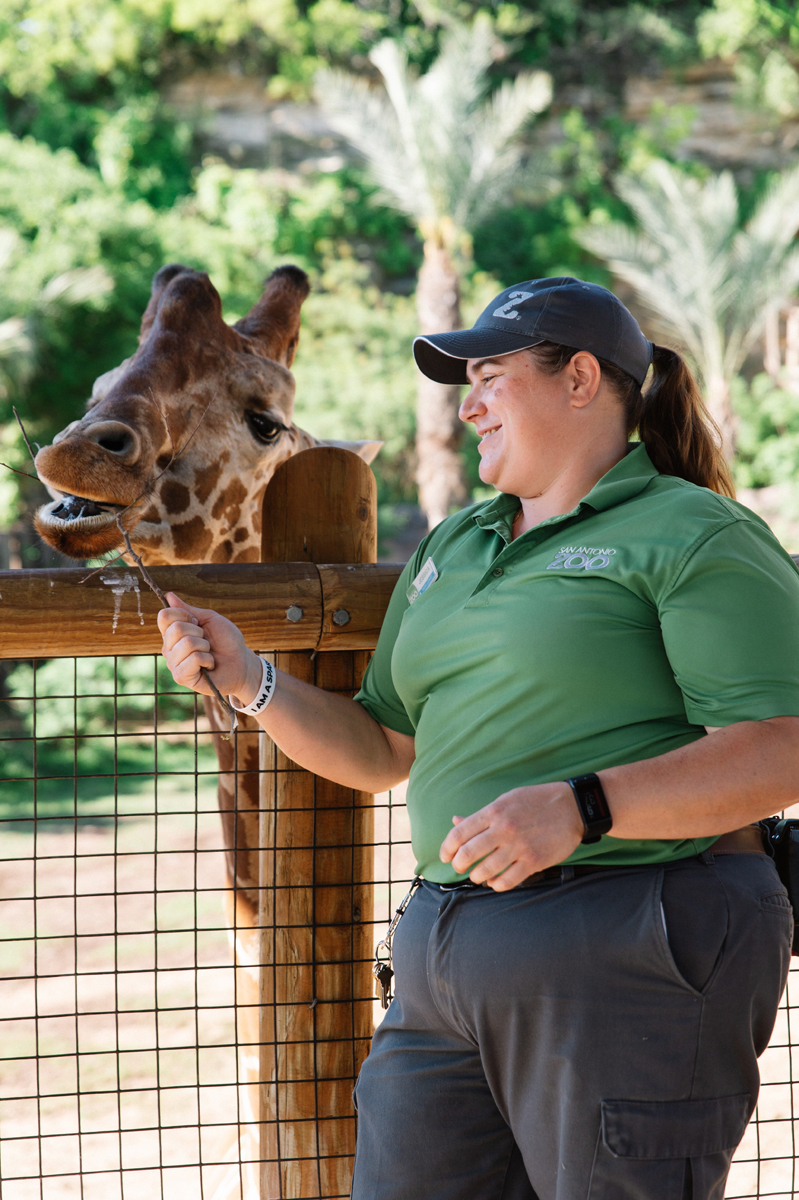 When you hear that Jessica Adam, Senior Animal Care Specialist at San Antonio Zoo, is intimidated by parrots, it’s hard to understand how she can handle working with lions, giraffes, and rhinos on a daily basis.

“I’ve never found a parrot that liked me. And their excited face is the same as their angry face, so you never know what you’re going to get,” she explains. But parrots aren’t the only birds that have given her a problem. “I had to work with the palm cockatoos, and they chased me out of the enclosure. Don’t laugh — they have big, macadamia nut-crushing bills. They can take a finger off like nobody’s business!”

Considering that we like our fingers and that Adam works with much larger, more dangerous animals with no fear, we’ll take her word for it. She’s been part of the zoo team for 11 years, working in a job she dreamed of since she was a little girl.

“One of my earliest memories is of watching a keeper at the London Zoo drag meat around an enclosure, then hang it in a tree. Then a tiger was released to find the meat. It was so cool. And I said, ‘I want to be the person who puts the chunk of meat in there!’ And I never stopped wanting to work with animals.”

In high school, career counselors didn’t know what to do with her. “They’re trying to help you be what you want to be, and I say, I want to work with tigers. ‘Huh?’ If I’d said chemical engineering, like my dad, they could have helped me. But zookeeper? ‘Zoology?’ No, zookeeper.” Luckily, she found a program called Zoo Animal Technology at the State University of New York at Oswego and got in.

She credits her parents for encouraging her to be herself and pursue her dreams. “My parents encouraged me to be curious and ask questions. And they never deterred me from being a zookeeper,” she explains.

I’ve never fit the mold of what society tells me I’m supposed to be as a girl. I don’t care for the color pink, I don’t wear makeup, I don’t wear dresses. I lose jewelry more often than not. I like sports, I like getting dirty and working hard. I got a lot of criticism for that growing up. I had to figure out how to let it go and not worry about what other people think of me.

Considering that she landed a job doing what she loves in a field that’s not easy to break into, Adam clearly followed the right path. She joined the aviculture team, working with birds, at San Antonio Zoo straight out of college. At the time, the zoo had the third largest collection of birds in the country, “but my heart has always been with mammals,” she explains. She now works with some of the zoo’s stars, like the new rhinos, the giraffes and the family of lions. Adam is responsible for husbandry training with Cosmo, one of the zoo’s giraffes, and with Sarabi, the zoo’s lioness. The list of animals she helps care for is long—as are her days. Her typical day starts at 7 a.m., checking the animals and then cleaning the enclosures, shifting the animals to their barns as necessary, then getting them back to their enclosures ideally before the zoo opens. Then cleaning the barns, working on maintenance and taking time to do animal chats. It’s far from glamorous. “It’s not playing with the animals. It’s a lot of work. It’s labor intensive, and it’s every day: 120-degree heat index, we’re here; hail storms, we’re here. We don’t get a day off for bad weather or for holidays. The animals have to eat.”

But Adam wouldn’t have it any other way. “People ask, ‘How can you be a zookeeper when these animals should be in the wild?’ They’re right. They should be. But they don’t understand that the wild is not safe. So, we provide them a safe place until the wild can be safe. I’m passionate about giving these animals a future.

“In the bird department, we have Micronesian kingfishers. At one point, there were 100 individuals in the world, and we had 10. One day it dawned on me that I had touched a tenth of the world’s population of an animal. It’s mind-boggling how small some these populations are, and we want to conserve them, teach people about them and make everyone appreciate what we have on this planet. And why it’s really important to keep it on the planet. That’s what inspires me and motivates me.”

“I know I can make a difference. If I talk to 200 people today and just one kid goes, ‘That’s cool, I didn’t know that’ I made a difference.”

Talking about the animals come easily to Adam, who admittedly shies from daily interactions outside of the zoo. How can she not fear the lions but fear shopping? “Lions are so much easier. They’re going to come in, and they’re going to yell at you. I never know what Jane or John Doe is going to do at the grocery store. They’re much more intimidating,” she laughs.

So what do you do next when you achieve your life goal at 25? “I don’t really try to plan out what’s going to happen when. Life has a funny way of telling you what you’re going to do sometimes.”

That makes sense coming from the little girl who grew up to be exactly what she wanted. 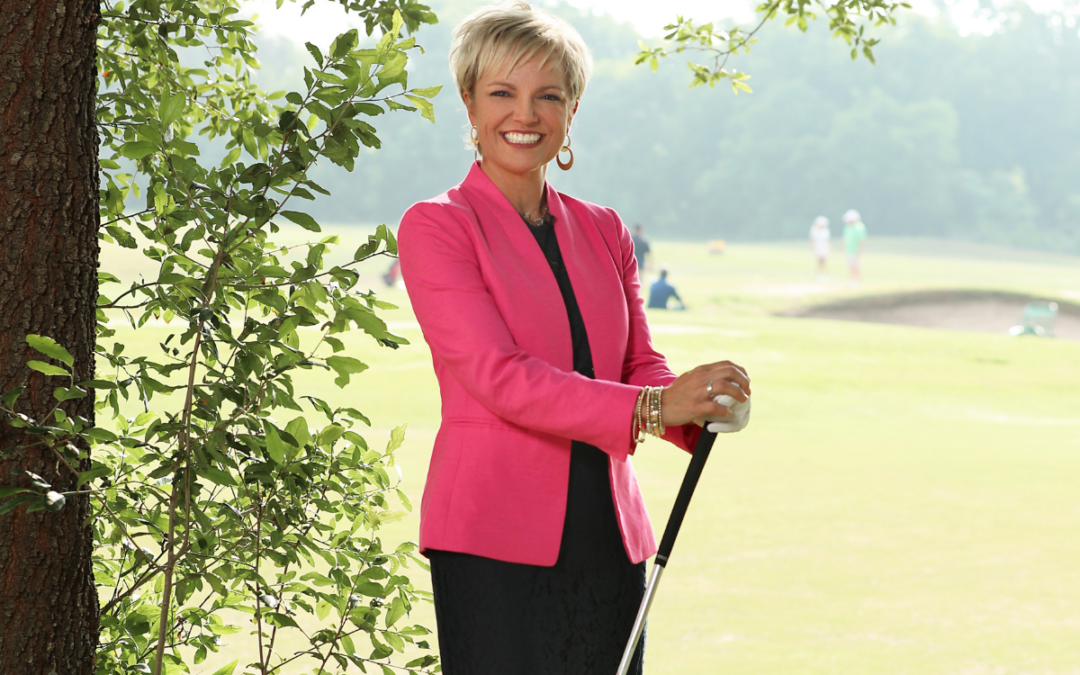 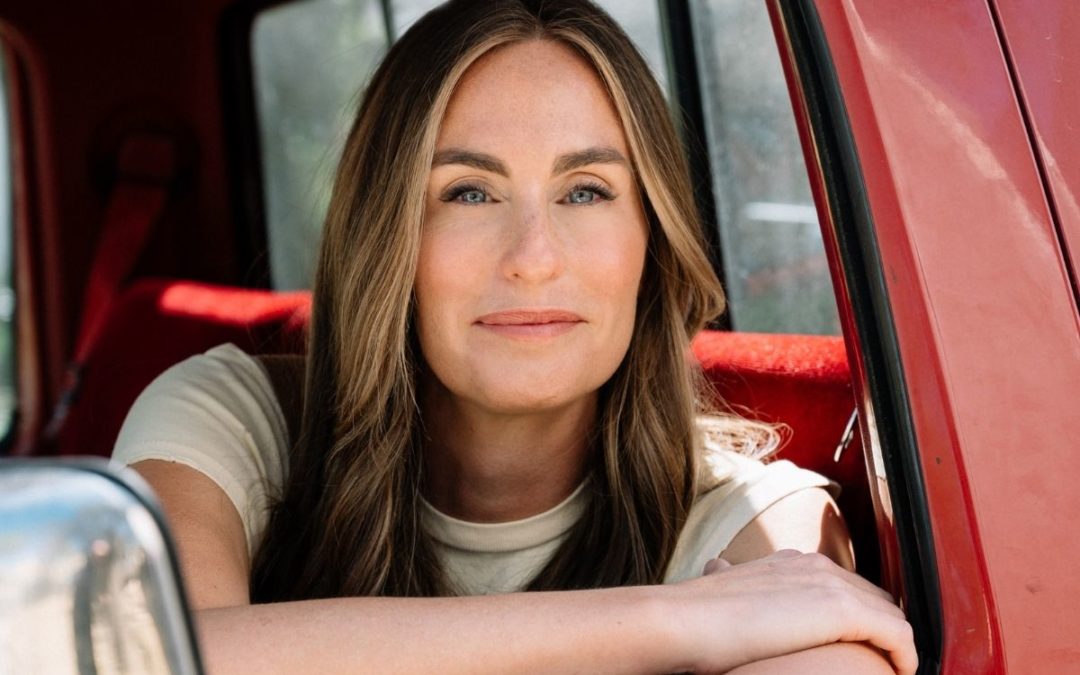 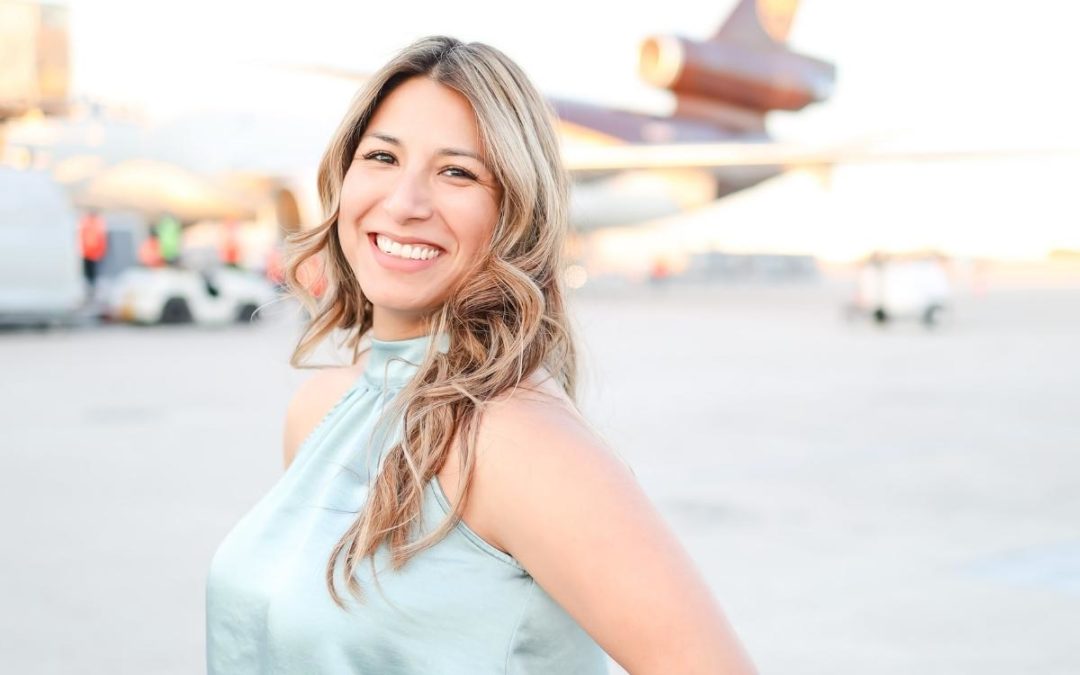