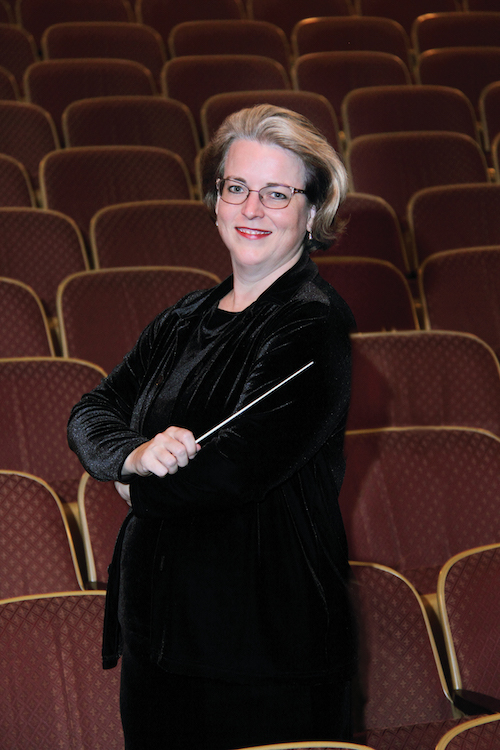 When musician Kristin Roach heard that producer Mark Richter was starting a new opera company — now known as the Alamo City Opera — she gave him a call. “Do you have a music director yet?” she asked. He did not. “Well, you have one now,” she informed him. And she has been in charge of ACO productions ever since. An experienced pianist, conductor and vocal coach, Roach had collaborated with Richter on multiple projects before, so it wasn’t exactly a leap of faith on Richter’s part. He knew he was getting a good deal.

Since ACO’s founding in 2012, the two have worked on 22 productions, mostly smaller chamber works, often sung in English and featuring more contemporary themes. The 2019 winter-spring lineup is a good example. Scheduled for Jan. 19-20 is the Texas premiere of “As One,” the story of a transgender woman’s life based on the real-life experience of Kimberly Reed, who grew up as a man and a football player. It has become the most produced opera in the United States since it premiered in 2014, noted Roach. Then in June, ACO will stage “Soldier Songs,” a multimedia production that combines elements of theater, opera, rock music and animation to explore themes of loss, patriotism, deployment, returning home and dealing with PTSD. Composed by David T. Little, the piece was originally created for baritone Timothy Jones, who will reprise the role in San Antonio. This one has been on the music director’s “wish list” since the mid-1990s when it was first produced in a concert format.

“One problem with traditional grand opera is that the stories deal with themes from the past that might have been relevant back then but no longer are. Today’s composers want to write operas inspired by contemporary life,” said Roach. “And that’s exciting for me, first because of the opportunity to expose our audiences to these new works, but also because it’s a challenge for a music director to work with so many different musical styles. I thrive on variety. I don’t like to repeat myself.”

No danger of that. In early December, when we met for this interview, Roach was handling multiple projects and responsibilities. In addition to preparing for the ACO January opening, she was also serving as an adviser/conductor for the Seguin-based Texas Concert Opera Collective’s production of “Amahl and the Night Visitors,” as well as dealing with the end-of-semester whirlwind at Texas State University where she is a faculty member. On top of all that, Roach was also getting ready to accompany Richter to New York to audition singers for the 2019-20 season during a week-long marathon of short sessions with several hundred performers. “They are all fantastic but what you are looking for is that one singer who really sticks in your mind,” explained Roach, who also serves as a piano accompanist for the auditioning hopefuls. For Richter, her judgment and musical knowledge are critical.

“Kristin is so attuned to what each aria or song is supposed to be musically that she complements what I do perfectly,” he said. “I judge the performers more from a theatrical standpoint while she takes care of the musical part. And, amazingly, we usually end up with the same picks. She puts tremendous attention into everything she does.” Together, the two have managed to attract and nurture a new operatic audience in San Antonio that responds to the kind of programming they present.

MUSIC WAS ALWAYS PART OF HER LIFE
Roach’s first encounter with operatic singing was a musical evening her musician mother and a friend organized when young Kristin was in middle school. For the occasion, the two women chose an aria from “Hansel and Gretel,” they had never sung before. Kristin, who was already a fairly good pianist, was pressed into service as an accompanist and singer helper.

Recalling the event, Roach remarked with a laugh: “That’s basically how I spend a lot of my days now.” As a teen, she also played flute and was in the band at MacArthur High School. But her real introduction to professional opera happened one summer when the San Antonio Festival produced “Madame Butterfly” at the Sunken Garden Theater. “I was fascinated, fascinated! It made a huge impression on me,” she noted. Naturally, she pursued music in college as well but almost dropped out of an opera conducting class, fearing that she wasn’t prepared for it. It was only after the professor chastised her, that she changed her mind. “How dare you drop my class! If you want to be an opera conductor, no one can teach you what I can teach you,” he told her, and he was right. The professor was the distinguished conductor David Effron, and to this day, Roach is grateful that he cared enough to speak to her.

“It’s a challenge for a music director to work with so many different musical styles. I thrive on variety. I don’t like to repeat myself.”

After getting her degrees from the Easton School of Music, the young woman returned to her hometown to pursue a multifaceted career, with opera eventually taking center stage. “I have been able to do a lot of different things in San Antonio that I probably could not have done elsewhere,” observed Roach. “I received a lot of support here; people know me.” One of those things was the founding of Richter’s previous company, San Antonio Opera, for which she served as rehearsal accompanist and chorus master at different times. Eventually, she found full-time employment as a choir director in two different Episcopal churches, where altogether she spent 10 years. All along, however, the now more-established musician was also pursuing a range of freelance jobs. Her bio lists conducting, coaching and pianist engagements all over the U.S. and abroad, as well as collaborations with famous stars such as Renee Fleming, Denyce Graves, Federica Von Stade and Placido Domingo when he performed here, (she was in the orchestra).

The mother of two boys, Roach had to do what many mothers do — find a way to fit her career around her parental role. “I wanted to be here to make their snacks, to go to PTA meetings, to be active in the community. I didn’t want to be traveling all the time,” she told us.

This summer, however, the conductor will once again hit the road, first to fly to Orvieto, Italy, to work with American singers studying abroad, and then return to the U.S. to spend five weeks in Shreveport, LA, where she is the music director of the summer program, Spotlight on Opera. Come fall, it’s back to staging operas with Richter, who only half-jokingly declared that he “would have had a heart attack years ago, had it not been for Kristin.”

Before parting, we asked the difficult question: How to make opera more popular with mainstream Americans?

“Opera is a combination of many art forms, music, singing, dance, theater, visual effects, etc., so there are many points of entry for novices. But for me, all of those are in the service of story-telling,” she said, thoughtfully. “Stories motivate people. That’s why they have to be believable human stories. Alamo City Opera shows are story driven.”