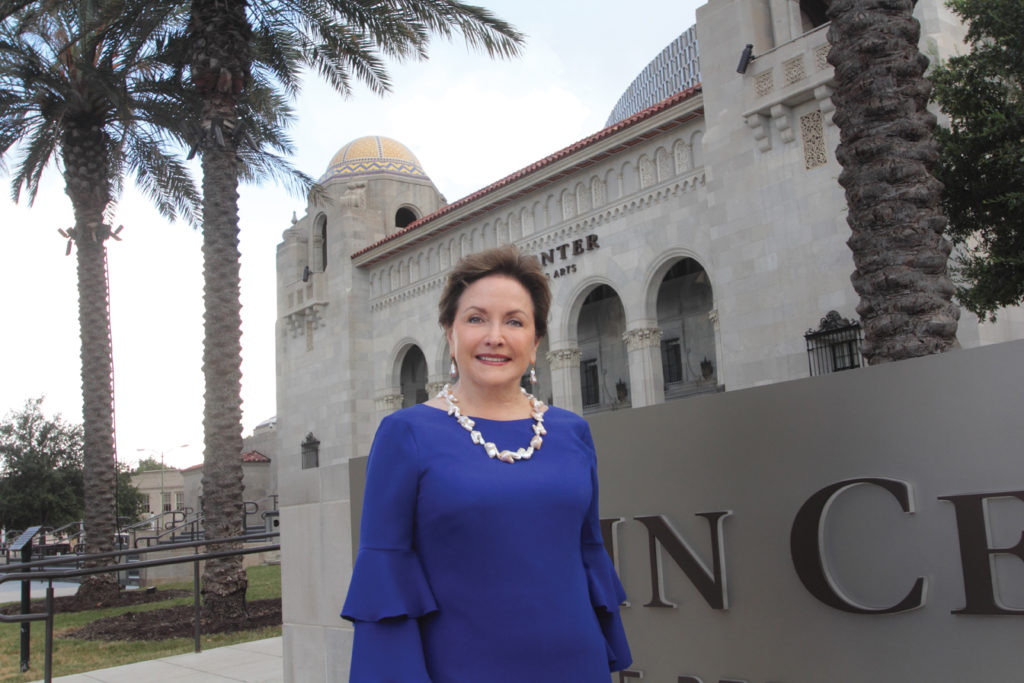 Kathleen Weir Vale has a good reason to be happy these days. As the chairwoman of the San Antonio Symphony’s governing body, she is looking at a promising near future.

“For the first time in many years, we have met our budget and are working hard to raise funds for our new season, which will be very exciting,” she explained as we sat in her living room in mid-July, talking about the symphony. “The musicians have a contract for the 2018-19 season, and the board has hired Michael Kaiser to serve as interim executive director. He is known as a turn-around specialist. He does this sort of thing all over the world,” she said with a smile. “I feel very optimistic right now.”

The “turn-around” Vale is referring to aims to stabilize the financial situation of the symphony, which has had money problems for decades and went through a major crisis that threatened its very existence earlier this year. In early January, it was announced that the rest of the 2017-18 season would be canceled, the contract negotiations with the musicians stalled, and it was unclear who was in charge.

The turmoil was caused by an unusual turn of events. Earlier in 2017, the Symphony Society of San Antonio (SSSA), which had run SAS for 78 years, had agreed to hand the governing reins to a new entity called Symphonic Music for San Antonio (SMSA), which took over concert production in the fall and got SAS out of debt. When SMSA suddenly decided to withdraw in December,citing musicians’ union pension fund liabilities it had not foreseen, the already dissolving SSSA was confronted with an entirely unexpected situation. The then-chairwoman called a meeting during which the decision to cancel the rest of the season was made and bankruptcy was discussed.

“That’s why I jumped in,” noted Vale, who was vice-chair of the old SSSA. “We still had a core group of people who understood the essential importance of the symphony to the city.” She rallied the SSSA forces, regrouped the board, and later reinstated most of the remaining season thanks to new donations. The first came from two friends who came to her house to offer $200,000 to restart the operation. “That’s what broke the flood gates,” she said. “Other people saw it and joined in. Thank God for the 900 who matched the county’s subsequent challenge grant of $350,000.” The relief in her voice is still apparent even months after those events. Eventually, the city released the funds it had set aside when it looked like SAS would be folding. The relieved musicians got a new contract in a two-hour negotiating session. To further show her support for the orchestra, Vale also attended every performance of every concert until the end of the season.

“One of my favorite quotes is from Theodore Roosevelt, who said, ‘Far and away, the best prize that life has to offers is the chance to work hard at work worth doing,’” she said. “And this was work worth doing. It’s important to always remember that the product is superb. Our musicians all hold advanced degrees; they are all musical geniuses. What they do for this city is unique. And I am glad that this board understands that they – the musicians – are the art. They create the art. Who wants to live in a city without music?”

Needless to say, orchestra members were grateful. “Kathleen did a great job; I was very impressed,” said violinist Craig Sorgi, who was chair of the musicians’ committee during contract negotiations at the time. “She was the right person at the right time. She played a key role in ending the insanity we were going through. She put herself out there and took a chance. It speaks volumes about her character.”

A Businesswoman and a Music Lover

A San Antonio native with deep Texas roots, young Vale grew up surrounded by accomplished women. Both her grandmothers were college graduates, and one of them earned a master’s degree back in the 1890s, eventually becoming a college professor and a Latin scholar, as well as a musician. Vale’s mother, Laura, was no shrinking violet either. The daughter of a Methodist minister, Laura left her native Tennessee to pursue studies at the University of Mexico in the 1930s, eventually becoming an educator – and loved music, too.

“Everybody was musical in the family,” recalled Vale, a joyous note in her voice. “I played the piano, the flute and the guitar, and I am a singer – well, was a singer. I grew up with music, went to the symphony as a child, and went to the opera.”

In college, however, the young woman decided to major in Spanish at the University of the Americas in Mexico City and later joined her father’s medical equipment business, Hope Medical Supply. She obviously had a head for business, as she became CEO at the fairly young age of 35. Her husband, Albert Vale, joined her as chief financial officer. Under her leadership, the company survived major shifts in the industry that required her to stay on top of changing governmental policies and industry trends. The business had to reinvent itself several times, and it currently supplies custom mobility equipment to patients who are paraplegic or quadriplegic. It was also work worth doing.

Having grown up in a family of women with two older sisters, Vale said it never occurred to them that they were not supposed to lead. Though she has passed the CEO badge to her only daughter a few months ago, she continues to be a leader – as clearly demonstrated by her action on behalf of the symphony.

“Kathleen is such a good leader; she is so fierce, so dedicated to the symphony,” said Kaiser, who was pleasantly surprised by how fast SAS overcame the crisis. “It’s a pleasure to work with her, because I know that the plans we are developing will be implemented.”

This “fierce” lady has also lent her drive and energy to other causes, such as politics and a range of San Antonio organizations, including St. Paul’s Episcopal Montessori School, the San Antonio Opera and the City’s Downtown Tax Increment Reinvestment Zone #11.

Until recently, Vale pursued her musical interests as well, as a singer in the San Antonio Choral Society, the San Antonio Lyric Opera Chorus, her church’s choir and in the group CANTOS.

Her current priority is, of course, the symphony. She spoke at length about the importance of music education and exposure to classical music – “It’s brain superfood,” she quipped – and she is excited about all the new and renewed initiatives SAS will be undertaking to reach more people and school children. Also encouraging are the management and marketing practices that Kaiser has introduced. A lot of work remains to be done, however, before her hope for SAS gets fully realized.