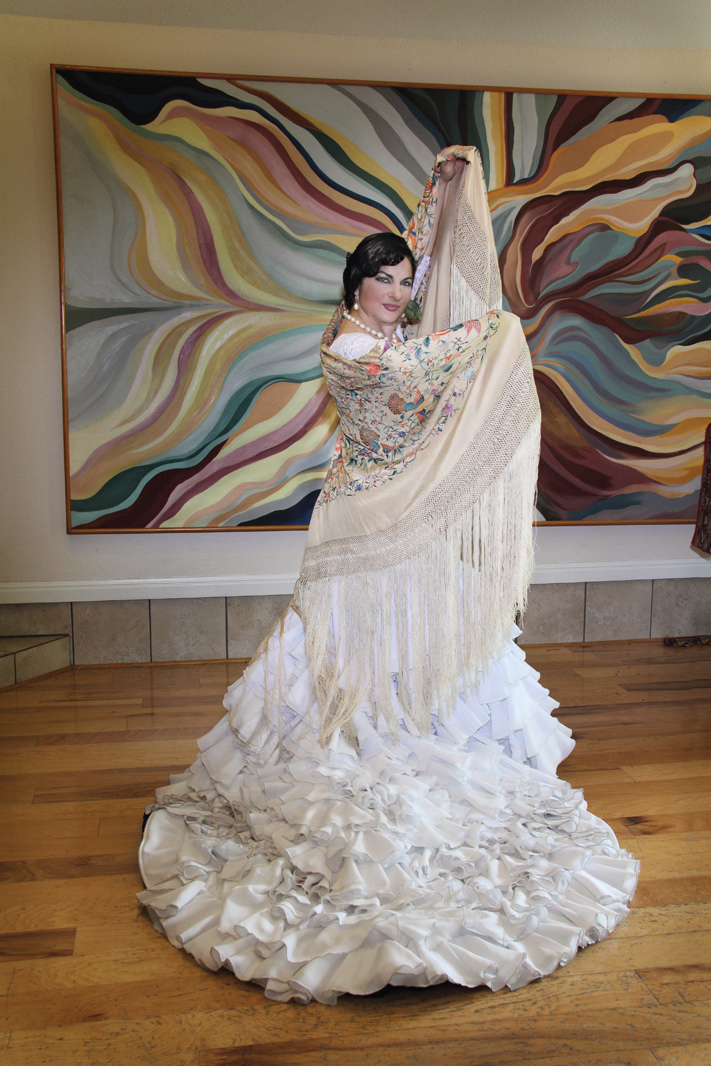 Tamara Adira is a woman who takes matters into her own hands. A passionate flamenco dancer, choreographer and producer, she has built a dance studio right in her house, so that she can practice and develop her choreographic ideas on a daily basis. The studio is also where she holds rehearsals, as was the case on a particular day in June when three collaborators — singer Chayito Champion, guitarist Randy Cordero and cellist Luke Bonecutter — joined her to work on several pieces she choreographed.

While traditional flamenco song and dance styles, such as alegrias, siguiriyas or tarantos, are distinguished by characteristic rhythmic patterns, individual artists have considerable freedom to create original choreography within those rhythmic frameworks. So, during the rehearsal, Adira repeatedly showed the musicians how she envisioned her taranto while they tried to develop musical accompaniment that could fit both the tarantos rhythms and her choreographic ideas.

Even during a rehearsal, Adira gave it her all, pounding the floor with strong footwork, gracefully but sharply twirling her long bata de cola (long ruffled skirt) while engaging arms, head and upper body in an eloquent dialog with the music.

This particular dance will be part of Siete Aguas (Seven Waters), a show she created in honor of San Antonio’s Tricentennial celebration. The work will be performed at various locations throughout the rest of the year, with July performances at the Pearl and the San Antonio Museum of Art, in conjunction with SAMA’s historic exhibit of Spanish art from the museums in Madrid.

“The idea for Siete Aguas was born from thinking about how San Antonio was founded on seven -acequias (canals) which made life at the early missions possible,” explained Adira. “The technology for building them came from Spain, and was brought there by the Moors from North Africa. So, I drew a parallel with flamenco, which also comes from Spain, from Andalusia where Gypsies, Moors, Christians, and Jews lived relatively comfortably together for a number of centuries. Like acequia technology, flamenco found its way to America and to Texas. Basically, what I want to show with Siete Aguas is that we are all connected, that culture stretches across the ocean.”

In addition to the artists already mentioned, the shows may include famed flamenco dancer Melissa Cruz, spoken word artist Andrea “Vocab” Sanderson and possibly additional musicians. All performances are produced by Adira’s company Arte y Pasion, which has been active on the San Antonio cultural scene since 2010. While focusing on flamenco, the company is not afraid of exploring new territory, and more importantly, to use flamenco dance within broader theatrical concepts. In fact, over the years, Adira has established Arte y Pasion as a producer of thematic works, which makes the company virtually unique in the San Antonio flamenco community. Another recent piece, for instance, was Sanctorum, presented as part of “the internment of a musical time capsule ceremony” during the 2018 Multicultural Conference at San Antonio College. The piece strove to convey “a safe space to dream in” while touching upon troublesome contemporary issues.

“Flamenco is a medium of expression just like paint,” said Adira. “When we are performing we want to express an idea, a story, a subject matter.”

Adira is the recipient of the 2010 Artist Foundation of San Antonio Bernard Lifshutz Award for Original Theatrical Production and the same organization, in partnership with the city, honored her with the Original Choreography Award in 2015. Both awards consist of grants for artists to develop new work.

Love at First Sight
Growing up in Richmond, Virginia, little Tamara attended ballet school and dreamed of becoming a ballerina or an astronaut. In college, however, the young woman chose to pursue architecture at MIT while also taking courses in landscape design at Harvard. Following graduation in 1991, she headed to Paris to study French architecture, returning home after a year with $50 to her name. At loose ends for a while, she eventually joined the Air Force to satisfy her wanderlust. It was there that she met her husband with whom she would later have two children. Since the two later separated, Adira now shares her home with her teenage kids.

“I wouldn’t trade my Air Force experience for the world,” she said emphatically. “It really grounded me. Prior to joining, I felt like I was flying around, unable to settle on anything. The military taught me how to work with others to make things happen on a large scale and how to lead others so everyone feels good about the outcome of the work.

I think that Arte y Pasion has benefitted from that. It’s run like a military group,” she added with a laugh.

Among her many military projects was one in Saudi Arabia that she still remembers as particularly challenging. As the base architect, Adira was given the task of relocating 5,000 Allied troops from their tent city to newly constructed dormitories, a massive undertaking that required her to work with a wide range of people, from Saudi royals to French and British officers and ordinary Saudi workers. Thanks to six years of working on projects such as these, she honed her organizational and management skills. Today, that’s something she would like to teach fellow artists. “I want to help them develop both their right and left- brain capacities in order to be more successful,” she noted. “For instance, I am very comfortable working on spreadsheets to manage my work and budgets, but most artists are not.” 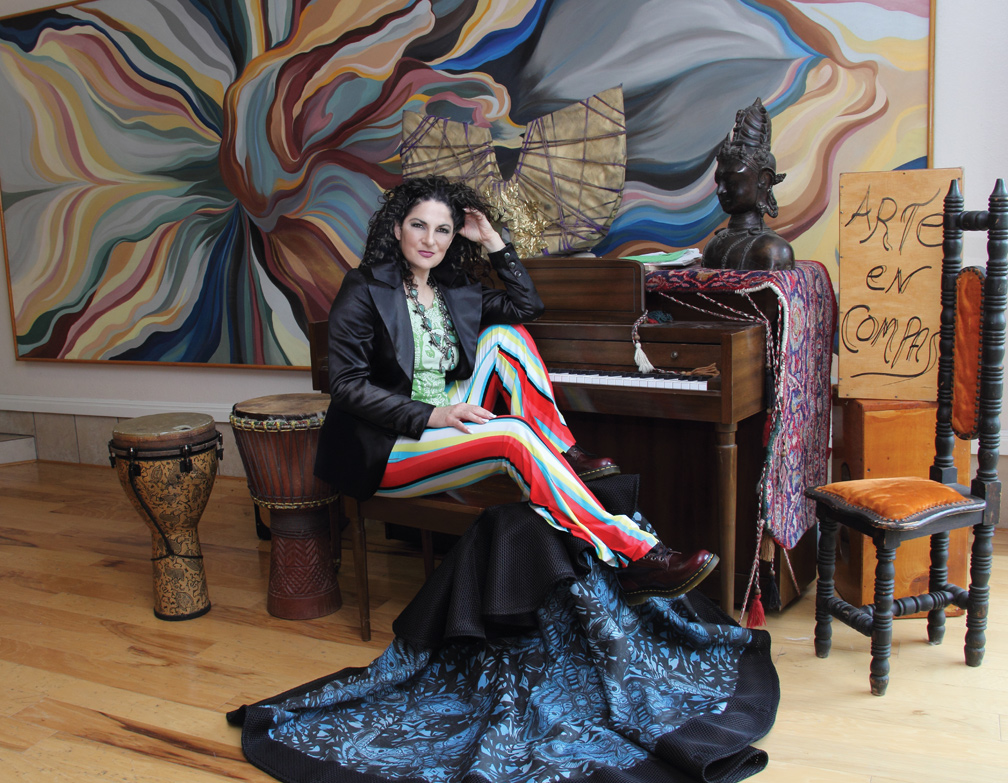 Adira uses both sides of her brain, not only as the artistic director and choreographer for Arte y Pasion, but also in her other job as a management consultant, an occupation she has pursued since leaving AF. She said it’s hard to make a living and support two children with art alone. At first, the projects were mostly defense contracts but eventually expanded to include civilian companies and institutions. Her latest client is a dental clinic that hired her to assist them with expansion and restructuring.

As busy as she was with life — including getting a master’s degree at Tulane University — the ballet aficionado did not discover flamenco until the age of 29 when she walked into a New Orleans nightclub called the Red Room. There, she fell in love with this passionate dance. “I didn’t know what hit me but I knew I had to see more of it,” she recalled. “I went up to the primary dancer and asked ‘When is class?’ And she said, ‘There’s one tomorrow.’ And I said, ‘I’ll see you tomorrow.’” Before long, Adira was in class five times a week.

It’s rare for any kind of dancer to start a career at 29, but she was determined, eventually pursuing studies with the famed maestro Teo Morca and other flamenco luminaries. By 2010, she felt confident enough to found Arte y Pasion to pursue her own vision and provide work for other flamenco performers. Not even a hip replacement could stop her. Since its founding, the company has produced 12 major productions while staging about 20 appearances a year.

For Adira, she said it’s a dream come true in more ways than she could imagine. “I have always dreamed about working in dance and working in multiple languages, and it kind of happened without me noticing. While I am working with Arte y Pasion, sometimes I am speaking in French, Spanish and English in the same session because I work with artists from all those cultures. And I feel like we have the courage to do things that you might see in Paris or San Francisco. I feel that what we are doing is really exciting, allowing us to have an active role in shaping the culture of San Antonio.”