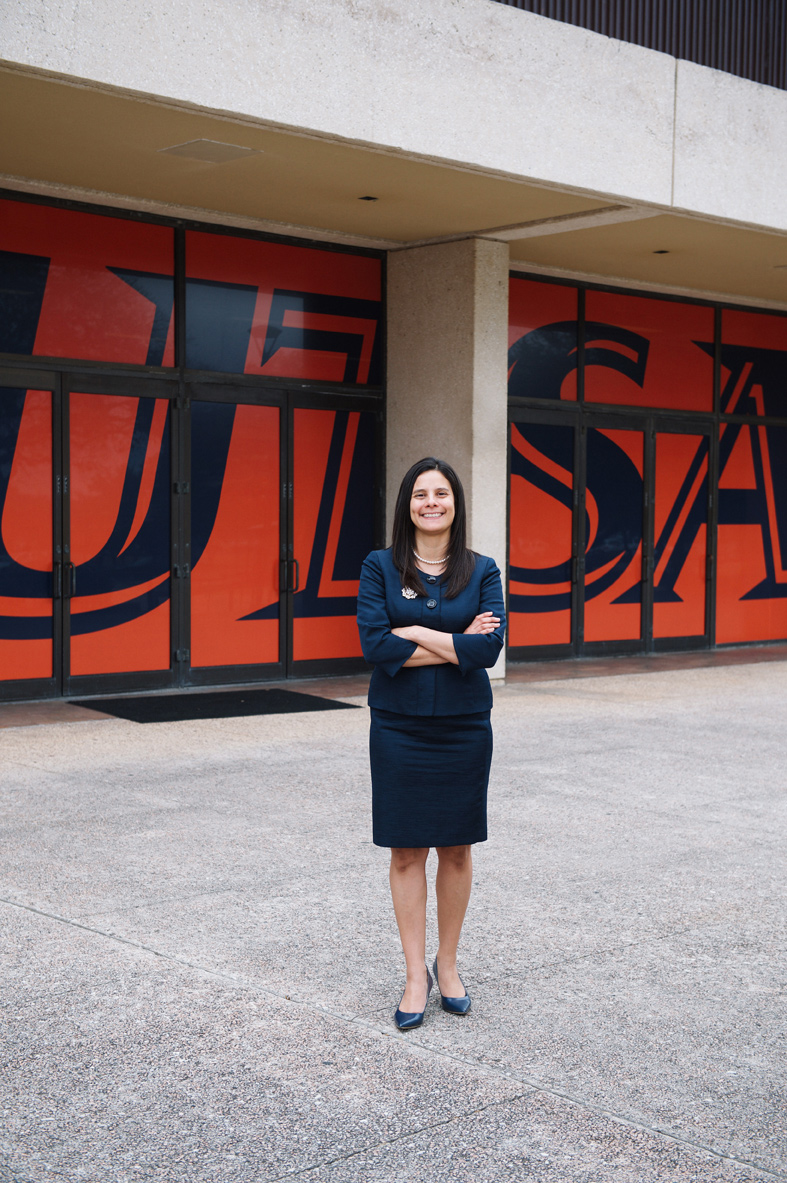 When you hear that Lisa Campos oversees a full-time staff of 125 plus 350 student athletes and a budget of $30 million, it’s hard to believe the road that brought her to her current position includes a graduate program she applied to at the last minute and a job she tried to turn down. She now serves as Vice President for Intercollegiate Athletics and Athletics Director at the University of Texas at San Antonio.

That doesn’t seem to have slowed her down. Campos came to San Antonio from Northern Arizona University (NAU), where she led the NAU Lumberjacks’ athletic department. During her tenure, NAU captured 32 Big Sky and Western Athletic Conference championships, and nine teams advanced to NCAA postseason competition, including the first NCAA Division I championship in school history, won by the men’s cross-country team in 2016.

Campos earned both her bachelor’s degree in business administration and her master’s degree in student affairs in higher education from Colorado State. “It was by happenstance that someone recommended the graduate program to me and that I was accepted,” she says.

“I’m a first-generation college graduate. My parents had never set foot on a college campus. That’s why I think my background has led me into higher education,” she explains.

“What really motivates me and drives me is serving students. Being a small part of their life and
positively impacting their success … hopefully being a leader for them.”

She also holds a doctorate in educational leadership from the University of Texas at El Paso (UTEP), a degree she earned while stepping into her role as senior associate athletic director there — the job she tried to turn down. She was assistant dean of students at UTEP and was happy with what she was doing. “I said no, I’m not interested. End of story.”

But then she called her mentors. “They told me that athletics needs more people with your background and with a student affairs perspective. I knew I would never have the opportunity again, so I jumped in and have never regretted it,” she says.

The similarities between her student affairs and athletics roles make it seem as if her nontraditional career path into athletics was the perfect plan: “It’s about serving students, putting them in the best position to graduate, to be successful personally. And in this world, to be a champion athletically as well.”

With all of the success she’s had in other programs, what drew her to UTSA? “Looking at the success this program has had—particularly in football, in such a short amount of time — there is so much potential. This is a sleeping giant. And how could you not love San Antonio?” she asks with a smile.
When Campos was named to her position at Northern Arizona University, she became one of 26 females and the youngest in the country to lead a Division I program at the time. She now serves on the board for Women Leaders in College Sports. “I think being a woman adds a little bit of a different perspective,” she says.

“I read a lot about motherhood and raising a son. When you look at these books, it’s just about how you treat people, how you have empathy for people and you listen to people,” she explains. “It’s very relevant to everyday life, not just to raising a great son.”

She’s working to do that with her husband, Darren D’Attilio, as they raise their 3-and-a-half-year-old son, Christopher. Christopher has already fallen in love with UTSA mascot Rowdy the Roadrunner, a friendly face he’ll see a lot of as he cheers on UTSA with mom. Thanks to the year-round nature of NCAA sports, part of their family time is spent at games, matches and more. “He’s either going to love athletics or hate it, it’s not going to be anything in between,” she says.

Campos manages her packed schedule with her priorities in mind, thanks to something the avid reader took to heart from one of the many books she’s read on motherhood, leadership and more. “There’s no such thing as balance, it’s all about priorities,“ she explains. “I’ve really taken on that philosophy. The staff and coaches that I’ve worked with know that my family is a major priority. That’s not just my blood family, but my athletic family as well.

“One of the first things I learned early on was being very clear about your core values and being driven by those core values every day.”

Campos core values: “Definitely family, definitely integrity. Inclusivity and diversity and making sure that people are included. Loyalty and personal growth. I think it’s so important to invest in the people that work with you and invest in yourself and continue to learn and grow.”

That helped fuel her pursuit of her doctoral degree. She was also training for a marathon at the same time. “I wasn’t a mom yet, so I had some extra time, but I look back and think, ‘How did I survive?’ But you get through it. Every statistic says I shouldn’t have even earned an undergraduate degree, so earning that doctorate is something I’m proud of,” she says.

Campos likes to take things head on. “I embrace challenges and see them as an opportunity,” she explains, and she applies that to her professional life. “I see myself as a builder.

“Obviously there will be challenges, but you make sure you have a great staff and people who are bought into the vision and strategy you have in place, having everyone come together to find solutions to overcome the challenges.”

Based on her track record, there’s no doubt she’ll continue turning challenges into opportunities at UTSA.